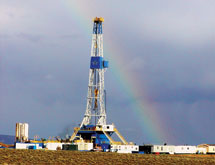 Experience matters, no matter what industry you’re talking about. In the oil and gas sector, operators at every point in the stream need to feel secure that the partners they work with know what they are doing, and are the best in their particular area. That is why DTC Energy Group has become a big name in the Rocky Mountains and particularly in the Bakken Shale region in a relatively short time.

From its humble beginnings as a small consulting operation serving five exploration and production companies, DTC Energy Group has evolved into one of the largest and most prominent players in drilling management and petroleum operations consulting in the United States. CEO Robert Sylar says the company’s success is thanks in large part to its experience and its ability to leverage its expertise quickly for customers. “We are able to provide a very experienced team of skilled petroleum operations and drilling supervisors on short notice,” he says.

DTC Energy Group is the result of a July 2011 merger between Sylar’s DrillTech Inc., which had been operating since 1979, and Dakota Territory Consulting. The latter company was founded in 2005 by DTC Energy Group’s current COO, Luke Clausen, a 20-plus-year veteran of the oil and gas drilling sector. Sylar says the impetus for the merger was the once-in-a-lifetime opportunity he and Clausen recognized was emerging in the Bakken region.

Although the consulting market is very crowded in the Bakken region, Sylar says DTC Energy Group has what it takes to set itself apart from the rest of the industry. “Our competition is fierce,” he says. “The only reason we exist is because we do a better job, otherwise we wouldn’t be around.”

Experience is the Edge
The key advantage DTC Energy Group brings to the table is its experience, and that’s something oil and gas operators throughout the Bakken area demand. Although many rigs in the region are operated directly by oil companies, not every operator has the manpower or other resources to do so.

“Other oil companies – often more streamlined independents – will opt to hire a consultant firm because of the reduced investment,” Sylar says. This “consultant-manned” market is what DTC Energy Group serves, and the company is manning 16 of the nearly 80 consultant-manned rigs operating in the Williston Basin area.

Leveraging the collective experience of the original companies and their principals is extremely valuable to operators in the Bakken region because of how difficult drilling there has become, according to Senior Advisor Mac Avery. “Over the last five to seven years, completing wells in the Bakken has become an extremely complex assignment,” Avery says. “What we’re doing now is comparable to a moonshot, in a sense.”

Not only has drilling in the Bakken area become more complicated, but oil and gas companies also are looking for new ways to streamline their operations and drive greater efficiencies to reduce per-well costs, an integral metric exploration and production companies track closely. Avery says DTC Energy Group brings an integrated structure to the well site in which an on-point supervisor is backed up by the experience of its management team and the expertise of its engineers. Nearly 90 percent of the company’s employees have more than 10 years of experience in the oil and gas industry, giving DTC Energy Group the capability to bring considerable skills to the well and save customers money by reducing drilling time. “We go in there wearing the championship belt,” Avery says.

Professional Operations
The experience and expertise that DTC Energy Group brings to the table provide customers with peace of mind, Sylar says, something needed in the oil and gas market because of commodity price uncertainty. “Probably the greatest challenge is the price of oil,” Sylar explains. “We are in a very volatile market.”

Avery says operators experience fluctuations in pricing constantly, and as such controlling their costs becomes a primary operational objective. DTC Energy Group works closely with customers to ensure that costs remain manageable, Avery explains, and reiterates that the experience of its engineers makes that possible.

Sylar says that because DTC Energy Group is the result of a merger between two well-capitalized and established firms, it has the resources to retain supervisors and engineers by providing them with competitive compensation. The company’s reputation and size also allow it to maintain a steady schedule of work, ensuring that its employees feel as secure in their positions as one can in a cyclical industry. Sylar also points to DTC Energy Group’s safety initiatives as proof of its commitment to its employees. The company is a member of PEC Safety, a provider of standardized safety training programs for the oil and gas industry, and ISNetworld, an online database of safety and regulatory information.

“Safety in the workplace is one of the dominant drivers in the industry today and, frankly, if you don’t work safely you’re asked to leave,” according to Sylar. DTC Energy Group complies with its clients’ safety programs at all points, and regularly holds training sessions for its employees.

Sylar says a highly professional workforce is essential for DTC Energy Group to succeed not just because of the advantages it provides for its clients. Customers also increasingly are looking for consulting partners outside of the traditional sole-proprietor model that used to dominate the industry. With a more professionally organized workforce at its disposal, DTC Energy Group gives its clients confidence when they look for someone to supervise and/or manage their rigs. “We’re trying to build a better consulting company, with a better structure, and we have built it,” Sylar says. “We have it in place and we’re moving forward with that new model.”

Executive Expertise
Along with the extensive expertise DTC Energy Group has cultivated in its work force, the company boasts a similarly high level of experience in its executive team. Before he founded Drilltech, Sylar worked as a technical services engineer and drilling supervisor for operations on the Gulf Coast and in the Rocky Mountains. Sylar also has experience as a drill site manager, completion engineer, operations project manager and consulting operations manager, the company says.

Avery has been a project consultant for major energy firms, national energy agencies and large U.S. public utilities. He also has served on the board of numerous companies in the energy sector as well as commissioner of the Colorado State Land Use Commission for three terms. Clausen has experience as a senior drilling supervisor as well as in recruiting and managing teams of drilling supervisors in the northern Rocky Mountains and Williston Basin regions.

Operations Manager Ed Lohmann is a third-generation oilfield worker who has designed and built drilling rigs, served as a drilling manager for a large drilling company and owned his own drilling company.

‘The Sky is the Limit’
Sylar says DTC Energy Group is in good position to take advantage of the significant growth in the Bakken area as more clients require extensive expertise to manage their drilling operations and become aware of the added value the company brings. “The minute we see an increase in activity, we are ready to move in,” he says.

DTC Energy Group continues to look for new ways to add value to its services, as well. Sylar says the company is considering additional avenues of involvement, such as water management or remediation of well sites. The company is looking for an existing service company that would make sense as an acquisition target to bring those services and expertise under its operation.

Wherever the company’s plans take it, DTC Energy Group is confident that it will continue to be one of the most sought-after consultants in the oil and gas sector, Sylar says. “I’d have to say that the sky is the limit,” he says.