Having started its activities in 2008, today E.ON Gas Storage (EGS) can be counted as one of the major European gas storage companies.

Together with its Austrian affiliate Gas Storage Austria, the company has a total of 14 underground storage facilities at 12 locations in Germany and Austria, with a total working gas capacity (which also includes the company’s subsidiary in the UK) of approximately 9.0 billion cubic metres.

Underground gas storage facilities play an important role in securing gas supplies in line with demand. They are an element in the infrastructure of the gas industry which makes it possible to create a balance between the virtually continuous supply of gas from the producing countries and deliveries to the customers where demand fluctuates sharply depending on the season. Underground storage facilities also help to bridge temporary supply bottlenecks.

To put it in basic terms, there are two ways of storing gas underground: the storage caverns or porous rock formations. The two differ with regard to the reservoir rock and the storage mechanism. One of E.ON’s major gas storage locations, Etzel ESE, is a cavern storage facility, and as Dr Peter Klingenberger, EGS CEO and managing director explained, is a joint project of E.ON Gas Storage GmbH, OMV Gas Storage Germany GmbH, VNG Gasspeicher GmbH und Gas-Union Storage GmbH.

“The cavern storage facility, which is located in Friedeburg in East Fresia (northern Germany) has a projected working gas volume of about two billion cubic metres, and has been in operation since 2012. The facility is technically operated on behalf of the consortium by EGS, and is the largest of four EGS storage facilities in northern Germany,” said Peter.

He went on to highlight some of the essential factors that gas cavern storage facilities need to meet today’s market needs: “The ESE project is a very successful project, which was completed on 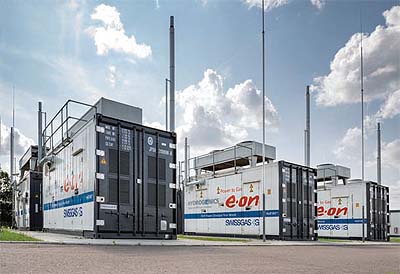 schedule and within budget. The plant reflects the current status of safety engineering and allows high flexibility together with high availability,” he stated. “All success factors for today’s market, such as parallel gas withdrawal and injection due to a dual pipeline connection, rapid change between withdrawal and injection and a large overall capacity, which can make a significant contribution to supply security, are fulfilled.”

Moving onto another of EGS’ storage facilities, the 7Fields gas storage association is unique in Europe and connects the German and Austrian gas markets to each other. “Through this we have enabled customers to use crossborder storage. The gas storage facility creates maximum flexibility and makes an important contribution to supply security in Austria and Germany,” said Peter.

In fact, in the light of the Ukraine crisis, the topic of security of supply in the gas market is at the top of the German and European energy policy agenda. “In recent years, the German gas storage facilities have proven their high performance, also in particularly long cold periods, and have already made an important contribution to the high degree of security of gas supply,” Peter confirmed. “E.ON has made extensive provisions to continue to supply its customers with the gas they have ordered, some of which can be in difficult supply situations. These provisions also naturally include storage capacity reservations. Storage facilities make a major contribution to network stability and reduce investment costs in network expansion.”

Alongside its operations in gas storage, EGS also heads the E.ON Innovation Centre Energy Storage. The Centre makes a key contribution to the shift to renewable energy with its developments in the area of energy storage, and works on a number of different technologies for the storage of electric power.

One of these technologies, Power to Gas (PtG) helps to integrate electricity generated from renewables into various gas applications. The main step is to split water (H2O) into hydrogen (H2) and oxygen (O2). “This process is known as electrolysis and it converts electrical energy into chemical energy,” explained Peter. “The process has been around for a long time, but what is new is that it is now used for electricity generated from renewable energies.”

Two of EGS’ projects in this area are WindGas Falkenhagen and WindGas Hamburg. Using innovative technology, the WindGas Falkenhagen plant produces up to 360Nm3/h of hydrogen from about 2MW wind power through electrolysis. It had already produced 2.8 million kWh by December 31st, 2014.

“Power to Gas opens up the huge energy storage capacities, which are part of Germany’s natural gas infrastructure, to renewable energies. This way the technology can play a key role in balancing volatile electricity production from renewable sources such as wind and solar,” concluded Peter. “The chemical energy contained in the hydrogen is also made available to different markets including the power and heat markets, industry and mobility. The need for storage capacities will grow as the use of renewables increases.”