Eagle Pipe is working to continue growing its footprint and tapping qualified talent and partnerships.

Jared Light and Brandon Dewan founded Eagle Pipe with one goal in mind in 2013: to buy American, provide best-in-class information and technology, and new levels of customer service and transparency.

Five years later, Eagle Pipe is a full-service distributor of oilfield tubulars supporting exploration and production as well as midstream companies across the United States in all major plays.

The Houston-based company stocks and distributes a full range of tubular products consisting of domestic and imported materials in a range of outer diameters, weights, grades, end finishes (API, semi-premium, and premium) and coatings. 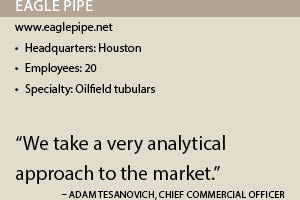 “We take a very analytical approach to the market,” Tesanovich explains. “We release a 40- to 50-page information deck, which better helps our customers make well-informed, data-driven decisions. None of our competitors offer the level of information and analysis that we do to our customers and suppliers alike.”

“This also focuses on analysis on pricing, supply, demand and trends,” Tesanovich says. “We regularly receive testimonials from our customers about how our monthly analysis has helped them procure materials and strategically align themselves, thus saving them money and/or assuring supply.”

He adds that Eagle Pipe employs an on-staff analyst who focuses on market trends. “One of the most important things as a distributor is how and when you buy pipe at the right cost,” Tesanovich says. “So with our analyst, we want to ensure we are capturing the trends and always on the pulse of the market. This way we can get ahead of it and stay ahead of it as much as possible.”

In addition, Eagle Pipe has always had a core business principle of being an open and transparent supplier for both its mills and customers. “While this may seem basic in principle, the majority of our distribution competitors like to keep the customer and the manufacturer completely in the dark about one another with the only focus being on themselves,” Tesanovich says.

He notes that this “fear-based” strategy that dominates the sector is a “dying strategy.” Eagle Pipe has taken the proactive approach of working as a team to increase intercommunication and transparency among the company and its customers and suppliers.

“This has been highly successful as our customers feel more comfortable with their supply chain and are confident they are getting the best fair-market pricing and support,” Tesanovich explains. “This is also highly beneficial for our suppliers as they have a full understanding of where their material ends up and which customers are utilizing their goods. Ultimately, this is very positive for Eagle Pipe and an approach we are highly proud of.”

Staying Nimble
Eagle Pipe has experienced significant growth since the market downturn of a few years ago. Unlike its competition, the company was creative and agile, and diversified its product portfolio to weather the storm.

“We recognized in late 2014 that demand for upstream market products, primarily oil country tubular goods, would be rapidly deteriorating due to the sharp drop in west Texas intermediate (WTI) crude oil prices,” Tesanovich says. “Because of this, Eagle Pipe was at risk as OCTG accounted for the vast majority of our sales.”

To reduce the risk to its overall portfolio, Eagle Pipe developed a market entry supply plan for midstream line pipe products. “We rolled it out to our customers who quickly added Eagle Pipe to their line pipe supply plan based on the excellent service, supply strategy and relationships we had developed on the OCTG side of the business,” Tesanovich recalls. “Over the last two years of aggressively building our midstream business, line pipe now accounts for nearly 40 percent of Eagle Pipe’s total revenue.”

In addition, Eagle Pipe grew both its footprint and employee base to 20 people. “Our headcount increased year-over-year 2015 to 2016 by 125 percent, and again increased year-over-year 2016 to 2017 by an additional 320 percent,” Tesanovich says proudly. “That’s a totalEagle Pipe 2growth of 533 percent over two years. We’ve actually hired three new people this year already. We also have a field team and work with third-party contractors, including quality assurance personnel.”

Eagle Pipe has also expanded its footprint with local representatives and opened several new offices, including in Dallas, Denver and most recently Oklahoma City. “Our downtown Denver office has quickly become a central part of Eagle Pipe’s business development strategy,” Tesanovich says. “It is now considered our second headquarters, as it accounts for a large portion of Eagle Pipe’s revenue.”

The company will also open additional offices later this year. “We understand that to be local and participate in different markets you have to have a footprint,” Tesanovich notes. “We want to be seen as a local company.”

This is why Eagle Pipe has an active role in local organizations in the communities it serves. Eagle Pipe is a proud member of many state oil and gas associations, including the Texas Oil and Gas Association, Texas Pipeline Association, Gas Producers Association (GPA) and the National Association of Steel Pipe Distributors (NASPD).

“We actively sponsor and participate with the aim of enhancing our local industry and supporting scholarships and other charitable causes,” Tesanovich says. “For example, here in Colorado we partner up with the Oil and Gas Colorado Association. We also operate in New Mexico, so we are strong participants in their oil and gas organization and many others.

“We also participate with charitable organizations, such as the Rocky Mountain Pipe Liners Club, which specifically focuses on raising money for tuition and additional training for blue-collar workers,” he adds. “This allows them to increase their ability to work and have a better future in the oil and gas industry.”

Working Together
Eagle Pipe’s employees play a critical role in its success. That is why the company prides itself on cultivating a family-like culture. “We’ve never had an employee quit in five years, nor have we had to lay off or fire an employee,” Tesanovich says.

“Once a week, we also hold a conference call with everyone to discuss our strategy,” he continues. “We are highly transparent with our team about the direction of the company, what we’re trying to accomplish, and how it benefits our customers and them.”

In addition, Eagle Pipe encourages its employees to engage and provide feedback. “We are very open to our employees’ advice,” Tesanovich says. “For example, we might get advice for the sales team from someone in the accounting department because they are sitting there listening to the sales calls, as everyone is involved. We want everyone to be on board and bring ideas to the table.

“Everyone is empowered here, and organic growth is also very important,” he adds. “We have people who have been able to work their way up in the company and make better lives for themselves and their families. This also shows our younger and newer employees there is a path to promotion within the company.”

As Eagle Pipe looks ahead, it aims to be the best, and not the biggest, distributor. “We want to maintain our family-style business and focus on our employees and customers, while continuing to expand our footprint,” Tesanovich concludes.

Award-Winning
Eagle Pipe’s management team is considered the “up-and-comers” of the industry, according to Chief Commercial Officer Adam Tesanovich. “We have proven that a fresh perspective is well received and desired, especially as the younger generation of buyer/decision maker is moving into senior roles at the E&P or midstream operating companies,” he explains.

He cites Eagle Pipe’s CEO Brandon Dewan, as an example. “He was recognized by the magazine Oil and Gas Investor’s ‘2017 40 under 40,’ which honors young business leaders making big waves in our industry,” Tesanovich explains. “Eagle Pipe was also chosen as one of the “best of the best companies” for U.S. Business Executives Magazine in 2017, and an article was published in their summer edition.”

Eagle Pipe also won the Oil & Gas Investor’s awards “industry supplier of the year” for the rocky mountain region in 2017. “That was a very nice award because we opened our office here about a year ago,” Tesanovich says proudly. “So within one year’s time we were nominated and won a very prestigious award. This year, the 2018 Oil & Gas Awards nominated and awarded Eagle Pipe for the ‘industry supplier of the year’ award again. However, this time we were nominated for this award in the Texas region. We look forward to more awards, hopefully, and growing strategically.”