Rising from the ranks

The five had a rich heritage in the Austrian energy sector and by bringing their knowledge, resources, and purchasing and sales operations together have created a strong player on both the national and international markets. Today, EconGas is a natural gas trading company that works with producers in Russia and Norway to supply distributors and end users throughout central Europe, and that trades on all major hubs in Europe except Spain. Headquartered in Vienna, the company has international subsidiaries in Germany, Hungary, and Italy.

EconGas’ operation is substantial. It works exclusively with customers that have an annual consumption of 500,000 cubic metres or more whilst consistently expanding above the average market rate. “Diversifying our supply portfolio has been a core strategic objective since EconGas was founded,” says managing director Jesco von Kistowski. “The company has worked hard towards this goal and continues to reconcile maximum supply security with offering competitive prices. EconGas holds substantial amounts of storage capacity and long-term supply contracts with major natural gas producers in Russia and Norway, and is continuously working on expanding access to new reserves and transportation capacities.”

One of the company’s most recent and significant portfolio additions is liquefied natural gas (LNG). The growing prevalence of LNG in the European gas market led EconGas to recognise its importance to the future and, as a result, to invest in LNG capacity at GATE Terminal in Rotterdam. The first delivery of LNG, received in September 2011, was a milestone for the company; within a year EconGas has already made its name as an important player in the Atlantic basin’s LNG market. 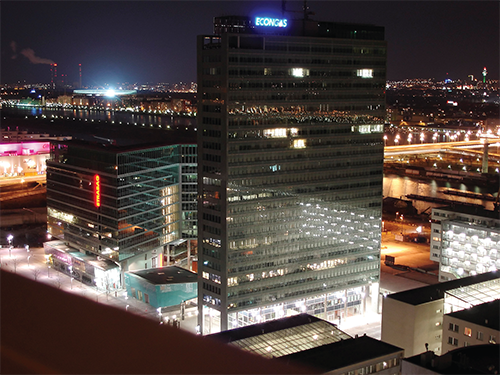 Traditional gas and LNG combined, EconGas natural gas sales have reached 19.6 billion cubic metres in 2011, making it one of Europe’s most significant natural gas companies. Furthermore, 67 per cent of these sales were sold to counterparts abroad, highlighting the international success EconGas has gained within just a few years. EconGas is also currently registered and active on ten major natural gas hubs as well as seven energy exchanges.

“Customers benefit from our ability to innovative, our tailor-made services, and our sophisticated risk management skills,” explains Kistowski. “Plus, we get the basics right – namely, security of supply. This includes diversified procurement, storage capacity, long-term supply contracts, and top quality standards in everything we do. We also offer a lot of extras. Our innovative approach and state-of-the-art technology enable us to offer risk management products that make costs more predictable and can contribute significantly towards budgeting and planning stability.”

Given the size of EconGas’ business, being able to operate in this efficient and reliable manner depends on effective energy trading and risk management (ETRM) software, as well as sophisticated forecasting models to predict customers’ demands.

“Gas Logistics is one of the core departments at EconGas and it uses advanced and custom-made models to prepare within-day and day-ahead demand forecasts with an hourly resolution that meets all requirements of our target markets,” Kistowski says. “They then nominate natural gas withdrawals from, and shipments to, specific exit/entry points, balance the difference between import and production, and forecast demand in relation to defined areas and regions. Due to the expansion of EconGas’ trading operations, the important work of our logistic exports will continue to grow in importance, especially in connection with capacity management issues out of new market regulations.”

International development remains at the heart of EconGas’ growth strategy and in 2012 it opened a new subsidiary in Croatia, where it plans to repeat the market entry strategy that made the company so successful in Hungary and Italy. “In Hungary and Italy we acted as ‘ice breakers’ as there are still preciously few companies that have managed to break into these markets,” Kistowski explains. “In these markets, we are facing very tough competition. Neither of these markets is truly liberalised: old barriers still exist, and new ones are invented all the time. Nonetheless our results are strong and we’re pleased with our subsidiaries’ performance. We have an excellent portfolio and outstanding staff to thank for that.”

He concludes with a positive outlook on the future of EconGas and its market: “Analysers in our industry are unanimous that in the longer run natural gas will take on an ever more important role. The International Energy Agency (IEA), for example, forecasts global gas demand to climb by about 45 per cent by 2030, taking 2009 as the base year. The IEA expects Asia, Africa and Latin America to be the main engines of growth, but also predicts an increase in demand of about one-quarter in Europe over the same period.

“Furthermore, in 2013 the new gas market model in Austria will come into effect whilst our other target markets require even further improvement in the products and services that we offer customers. After several years of exceptionally fast growth, EconGas plans on consolidating our activities in the next few years in order to optimise our internal processes and be able to meet the changing requirements demanded by our markets.”