Getting the right measurement

Elster Instromet is a gas metering technology company based in Germany.

It has a history with roots in the mid-1800s when gas lamp manufacturer Elster was founded, but took its current form following the merger of Elster with Instromet (an instrumentation manufacturer established in 1965) during 2005. Today the company is part of the much wider- ranging Elster Group and specialises in building ultrasonic, turbine, rotary and diaphragm metres as well as gas pressure flow regulators for low, medium and high pressure. In addition to products, the company also delivers complete turnkey packages known as Integrated Metering Solutions (IMS).

Individual off-the-shelf components available from Elster Instroment are wide-ranging and have application in both upstream and midstream sectors of the gas industry. One of its most innovative products is the BK diaphragm mechanical flow meter that utilises absolute encoder totaliser technology developed in-house. This provides BK meters with faultless electronic data transfer, a feature that will become essential in the gas industry over the next few years. When integrated with data loggers, volume correctors, and flow computers, the combined solution offers comprehensive system functionality including collection and storage of data, pressure regulation, flow, pre-heating, co-ordination and supervision of gas systems. 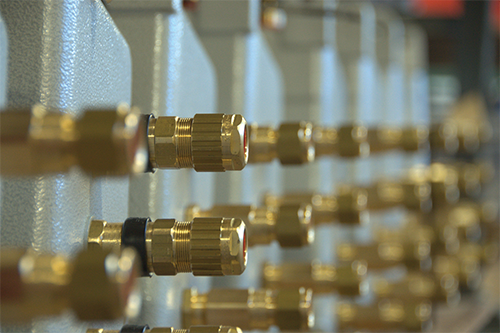 frequency pulse generator connection in external power mode to provide measurements with even greater accuracy. The unit can be combined with the FE260 function extension unit, which makes the power supply safe to operate on battery power even within Zone 1 explosion environments. These features are just some of the many modes that make the EK280 a highly flexible and reliable volume convertor. It is expected to launch by the end of 2012.

Elster Instromet works on more than just products, however. At the end of November 2010 the company won the tender for GAIL, a natural high-pressure gas metering proving facility located in Hazira, India. It is part of the country’s newly expanding gas network (currently at 9500 kilometres but expanding to 25,000 kilometres) and will provide high-pressure ultrasonic and turbine flow meter calibration as well as proving facilities for natural gas.

The facility is owned by GAIL India Limited, which is majority-owned by the Indian Government. It comprises seven parallel streams, four of which are 12” 600# and one stream each of 8” 600# and 4” 600#; these are equipped with turbine meters and ultrasonic meters. The seventh stream is a 2” 600# equipped with two 2” turbine meters. The plant also includes India’s first C9 gas chromatograph – the EnCal 3000. Elster Instromet’s role was to provide not only the equipment required to construct the plant but also the design, supply, construction, testing and commissioning of it as well. The project was completed and the facility opened at the end of 2011.

The relationship between GAIL and Elster Instromet extends back to 1984, when the component manufacturer provided GAIL’s very first metering system. The two have worked closely ever since, with Elster Instromet being a key provider of components to the gas operator. Despite a 20-year history of close relations, however, Elster Instromet negotiated for more than eight years before being awarded the tender in recognition of its experience and track record in accurate, high quality gas measurement.

Being a leading global supplier of products and services requires a committed workforce and efficient workshops. The Elster Group is a major organisation accounting for more than 7000 employees located in offices across all continents in the world. It also operates manufacturing facilities worldwide: Mainz, Dortmund, and Osnabrueck in Germany; Silvolde, the Netherlands; Essen, Belgium; and in Spain, Italy, China, the UK, and Latin America. Elster Instromet NV is a Belgium-based subsidiary, owning and operating the Essen factory with more than 160 employees in order to meet the demands of its international business. It uses the Group’s international sales network to provide efficient services to its customers.

The gas market has proved unpredictable for Elster Instromet, however. Revenues from 2012’s second quarter results are $253.6 million, a 6.8 per cent decrease compared to the similar period in 2011, whilst profit was down 9.8 per cent. An increase of 0.3 per cent in the constant currency basis figures was a consequence of strong performance in North America, where demand for monitoring products is growing, but the generally unfavourable numbers result from a weakening European sector.

Nonetheless, as a major name in gas metering technology, Elster Instromet looks confidently forward. It continues working on its technologies such as smart metering, which represent an important value added service for the future, whilst continuing to work on even more advanced solutions to meet the needs of its clients in the gas industry. In early 2012, Elster Group also announced its Operational Excellence programme in order to capitalise on smart grid deployment opportunities throughout Europe, whilst making daily operation more efficient through consolidation projects. Its clear guidelines will help Elster Instromet maintain a foothold at the forefront of its market.