Driven by a desire to create a 100-percent green energy future, Energinet owns, operates, and expands sustainable energy infrastructures all across Denmark. Maintaining its position as one of Europe’s leading contributors toward a climate-neutral supply of gas and electricity, the company focuses on security of supply, sustainability, and open access for all users.

“For over 18 years, Energinet has been a state-owned sustainable energy operator. Based in Denmark, we are part of a movement to develop energy policies, in order to support decarbonization and more renewable energy production. We work closely with the government in order to follow through on projects and policies quicker than a privately held company. 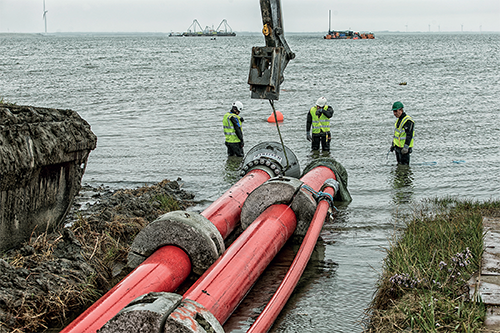 “Energinet is primarily an Electricity and Gas Transmission System Operator (TSO), but it also owns and operates gas storage units. We also have a huge digital IT infrastructure in place, which means we support advanced market design; and can guarantee the origin of all our electricity, gas, and hydrogen. As a broad infrastructure operator, our latest assignment was to prepare two energy islands, in the North and Baltic seas, for the accelerated development of offshore wind. This is in-keeping with our green strategy. Over two thirds of our current electricity output is sustainably produced, as well as 30 percent of our gas. We are currently in the process of negotiating several regional, bilateral, and European projects in order to increase these figures,” begins Torben Brabo, Senior Vice President at Energinet.

The engine behind Energinet’s success has always been a strong belief in the necessity and power of sustainable energy alternatives. As Torben explains: “Following the liberalization of electricity and gas, there was a political discussion surrounding how the TSO should operate. We have a very market-orientated and green parliament in Denmark, which makes us global front-runners when it comes to sustainable and effective energy systems.

“When the company was established, the parliament made the decision that we should be independent, which meant that the government took us out of the previous commercial owner and prepared us as an independent entity with an independent supervisory board. As a result, we can now create energy infrastructure for the sake of society, not for profit. We drive analysis on social and economic welfare in order to decide on projects of strategic development, in accordance with our findings; this process is now similar to the EU-regulatory scenario and network planning.

“Our sophisticated, data-driven processes mean we are global front-runners in a range of sectors. We offer open seminars on a variety of different development topics, which we prepare and carry out in close collaboration with the energy sector stakeholders. Maintaining this level of transparency with stakeholders and other influential figures within the business is one of the reasons for our success.”

Energinet’s work has helped make Denmark a global leader of the green transition. “In Denmark, the renewable electricity sector is fully integrated with the renewable transition and has been for decades. It’s about more than wind and sun energy, as we want to look at, and make use of, all different kinds of sustainable production. As of today, we are around two thirds renewable, and by 2030 that number will be up to 100 percent. We are very high on electrification, heat pumps, electric cars, and demand side response schemes; we also have a very 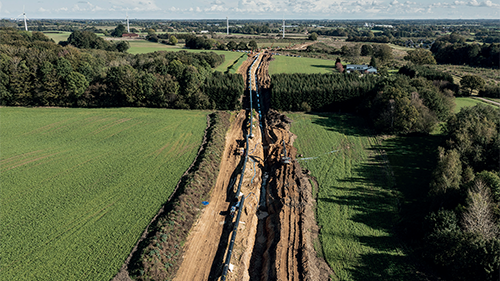 advanced digital IT system, to manage the increase in volatile renewable electricity production we expect to see over the next ten years. Additionally, we will soon be delivering renewable electricity to many our neighbors, through our many interconnecting cables – the newest connect us to the Netherlands and UK.

“The gas sector operates a little bit differently. We are seeing a decline in fossil fuel and natural gas use, which means new infrastructure is needed to accommodate alternative gas production. Denmark started on biomethane production about ten years ago, and it’s now at 30 percent, meaning we can be 100 percent green by 2035 with biogas alone. However, this year we finalize the big Baltic Pipe project which carries Norwegian gas for Poland, Ukraine, and other Central and Eastern European countries (CEE). A key project for European gas supply security and for CEE decarbonization, as gas substitutes coal.

“Interestingly, we started doing detailed joint gas and electricity analysis about six years ago, with the expectation that these energy systems would be key drivers in the future of energy production. Using that analysis, we discovered that hydrogen would also be an important component of that integrated system. In fact, we now predict that by 2030, hydrogen will make up several gigawatts of electrolysis (PtX) and e-fuel production in Denmark,” Torben discusses.

Today, the company looks to expand its portfolio, in order to make effective use of all avenues for carbon-neutral energy production, including hydrogen and CO2 storage. As Torben details: “It’s all about assessing the scenarios and building the right infrastructure. We are already doing this successfully for renewable energy production in Denmark, we are tripling, even quadrupling our electricity production in these areas. Alongside big, centrally constructed infrastructures we are also seeing a revolution in terms of de-centralized energy sources, including more solar panels and wind farms; connected to smaller PtX installations and hydrogen networks.

“It’s a balance between increasing large-scale infrastructure and managing exponential growth in terms of smaller-scale energy systems and local energy production. Until now we have been successful mainly in terms of large-scale infrastructures, and now we have a double objective for managing a smooth coalition between these systems and smaller pockets of production. Finding a way of optimizing all those energy sources will be important for the future of Energinet,” he concludes.