The roots of the company date back as far as 1994 when Euro Pipeline Equipment was founded to design and produce its equipment, building on the experience acquired during many years of technical support provided on behalf of international pipeline contractors all over the world. The ISO 9001 accredited company is based in Carpaneto Piacentino, Italy and maintains a production plant that extends over a total area of 53,000 m2, of which 20,000 m2 is completely covered. Euro Pipeline Equipment combines proven industry innovation, trusted Italian build quality and reputable third-party suppliers to deliver a reliable and targeted pipe laying solution.

“We are a manufacturer of a full range of pipeline equipment for the mechanical part of pipe laying construction. Our products range from smaller lines to larger plant equipment and machines, weighing 100 tonnes. One of the company’s keys strength is that we are part of a wider group, which allows the business to manufacture internally and to therefore fully control quality and the entire supply chain,” elaborates Corporate Sales Manager, Matteo Dondeo. “We design equipment internally and can then source the frame and other components from within the group and we also work within trusted and market-leading suppliers such as Caterpillar and Bosch. By developing machinery in-house we are in a position to provide custom equipment that is exactly the right specification for the client’s requirement at a competitive price.”

Euro Pipeline Equipment has provided equipment to leading pipeline construction contractors in markets all over the world. During July 2016 for example, it was announced that the respected 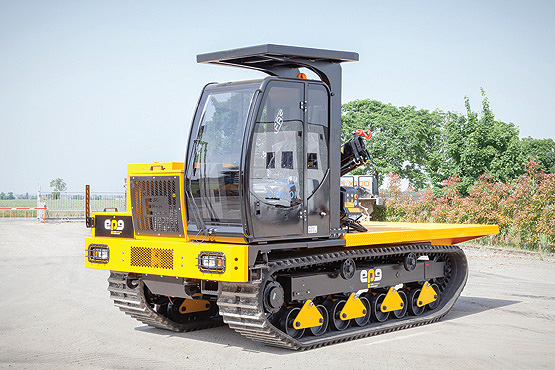 Italian oil and gas industry contractor, Saipem, had again chosen Euro Pipeline Equipment to provide pipeline construction and laying equipment. The company was contracted to provide several machines including an initial group of ten Performer GPL 980 pipe laying machines, to be deployed around the Shah Deniz Oilfield, located 90 Km from the Azerbaijan coast, to contribute to the building of SCXP South Caucasus Pipeline Expansion Project. “The Performer GPL 980 has several unique features and is the only pipe laying machine on the market that can be disassembled and transported via standard normal open top containers, which allows a great saving in terms of shipping costs and time,” Matteo reveals. “During 2015 we also delivered two unique bending machines that included several project specific characteristics, which were not previously available on the market. We design all of our own equipment while keeping in mind the desired application of the machine on site. The features of the equipment that we produce are derived from the requests of our clients and pipeline contractors around the world.”

Traditionally Euro Pipeline Equipment has focused on the domestic and Europeanmarkets, however in recent years the company has expanded its operations into new regions including South America and the Middle East. “We see Saudi Arabia and the wider Middle Eastern region as an important future market, as well as Mexico and South America. Algeria is also increasingly an active market within Africa for the company as well. We are currently planning to open a new branch in Abu Dhabi by the end of 2016 and we also intend to establish a presence in Mexico, which will be the hub for both Central and Northern America.”

Core to the company’s current success and its future operations is its close co-operation with both its clients and internal departments within the group. During the coming years Euro Pipeline Equipment will continue to leverage these strengths to further its international presence and to further develop marketleading pipe laying solutions. “The company’s core strength is teamwork. Our commercial department receives feedback from the customer relating to their specific requests as well as the requirements of the project prior to the project being awarded to the contractor, so we will know more or less what to develop. We are then able to match a product to the project if we have the right specification, otherwise we can undertake a valuation study and manufacture a new system to propose to the customer,” Matteo concludes. “During the next 12 months our goal is certainly to gain a foothold in Mexico and the South American market, as well as in the Middle East. During the next five years the target of the company is establish a presence in every major global region, whether that be through new branches, sales representatives or partners. We ultimately want to be a recognised equipment provider all over the world.”