The evolving LNG supply chain in 2020. By James Hermary

For the past few years, when comes to looking ahead at the future of LNG infrastructure, the narrative has been relatively simple; expect growing demand and make sure that you can keep up. Build fast, build cheap, and try to build smart where possible. With market growth looking set to continue, significant shifts suggest that the year will be defined by more than just pace. As the LNG supply chain becomes more flexible and complex, new players are entering the market with a broader range of expertise. The impact of this on the existing infrastructure will undoubtedly include a boost in activity.

The LNG industry is becoming better at joining the dots throughout its supply chain, linking up shoreside, floating, and ship-based infrastructure, largely thanks to the entry of engineering, procurement, and construction companies (EPCs) into the market. At the same time, we are seeing a greater range of floating infrastructure emerging, such as floating power plants, alongside an increase in flexibility for shore-based infrastructure. To keep up this momentum we’ve seen in the sector, we need to continue to innovate and devise new infrastructure solutions. The good news is that it looks like that’s exactly what is on the horizon for us.

If we start by looking at LNG’s place in the wider energy context, it’s still a growing part of the world’s increased demand for energy, particularly when considering it’s rising prominence as a cleaner and lower carbon fuel. A recent report by the Energy Industries Council cites the International Energy Agency (IEA)’s calculation that energy demand grew by 2.3 per cent in 2018, which 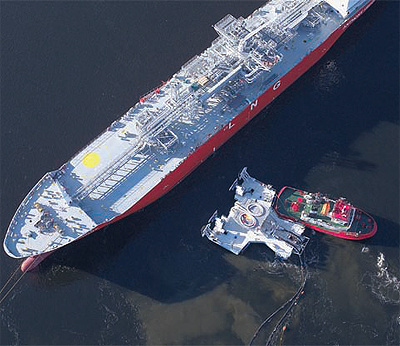 was its fastest pace in the last decade. The fuel which had the biggest gain was natural gas, which accounted for 45 per cent of this growth in energy consumption. Looking ahead, the IEA predicts that global gas demand is expected to grow at a rate of 1.6 per cent until 2024.

The same report forecasts that growth consumption will be highest in the Asia Pacific region, accounting for around 60 per cent of increases until 2024. China will account for an estimated 40 per cent of demand increase in that period and strong consumption growth is also expected in South Asia in countries like Bangladesh, India and Pakistan. In these areas, much of this demand is driven by the need to switch away from highly polluting coal in order to reduce greenhouse gas emissions in line with the Paris Agreement.

The development of floating LNG infrastructure has been key in growing this import capacity, with an increase in FSRUs in recent years. These projects are popular where CAPEX costs are reduced, and it has shorter lead times for connecting LNG to new markets.

Many commentators have stressed the need for LNG projects to become leaner and more resilient in the long term. Writing in the Financial Times in 2019, David Sheppard argued that: “The LNG market is a long-term game and, while it is suffering from oversupply, that is unlikely to continue. Gas demand globally rose almost five per cent last year, according to the International Energy Agency, more than double the pace of growth for oil demand.”

Most notably in Asia, “steps have already been made to open up markets, add new participants and promote price discovery,” according to Platts.

It’s also important that suppliers can adapt to a supply chain that is becoming progressively more diverse in its functionality. For instance, the class society DNV GL sees weaknesses in what it calls “stranded supply”. Few large terminals, it argues, are set up to cater for smaller LNG carriers, a deficiency that suppliers hope to rectify by tapping into under-used floating storage and regasification units (FSRUs) anchored near areas of stranded demand.

A maturing supply chain – Growing demand for jettyless and floating solutions
LNG infrastructure, compared to oil or coal infrastructure, remains relatively expensive, technically challenging, and increasingly needs to deal with more complex environmental concerns. This places significant pressure on LNG infrastructure suppliers to innovate,and design solutions that can be created in challenging locations, with minimal environmental impact. This is particularly true in the case of small and mid-sized LNG projects, with interest gravitating towards jettyless solutions.

As we’ve seen for the past few years, activity is being sustained in Central and South America, as well as Southeast Asia. One new trend seems to be increased interest from China, Japan and especially Korea in using floating hoses for jettyless solutions. This is similar to dynamics we’ve previously seen in the oil market, that are now becoming increasingly more commonplace for LNG. Much of this relates to the loading and unloading of small carriers and bunker vessels, which are integral to the growing use of LNG as a marine fuel. Many current terminals are not equipped to receive vessels of this size and creating new, dedicated jetties would prove costly. As an alternative, the industry is expressing a burgeoning interest in using floating hoses to create jettyless solutions. This enhances existing infrastructure, opening up more options and possibilities for LNG transfer.

Jettyless solutions aren’t the only type of infrastructure opening up new possibilities. As the increase in proposals and agreements in principle for floating power plants demonstrates, the market is seeing increased value in the creation of floating infrastructure, which is easier to construct (particularly in challenging locations) and can be moved if it becomes uneconomic. LNG infrastructure began with carriers, followed by FSRUs. Floating regasification and power generation is the next step in a more comprehensive LNG supply chain.

Enter the EPCs
Linking together this expanded, more comprehensive supply chain brings with it new challenges. However, this year we’re seeing an increased number of EPCs entering the market and bringing with them expertise in the entire LNG supply chain. Currently, as it stands in the LNG market, few companies can manage a full project that encompasses both floating and shore-based infrastructure in the same way that EPCs have managed in the past for oil. However, as the LNG market grows, mid-size EPCs are now seeing potential in the market – and bringing with them knowledge and experience of integrating these disparate elements. Many of these projects, linking shore to floating infrastructure, are a great opportunity to showcase the value of floating hoses – for instance, in jettyless solutions, which EPCs pioneered in the oil industry. Another example is adding the ability to load small carriers for FSRU facilities. Given that EPCs typically charter both vessels – the carrier and FSRU – it’s then easier to adapt both so they can use floating hoses, perhaps by adding reels to the FSRU and adapting the manifolds on the small carrier.

Taken together, these trends indicate exciting times for the LNG industry. Solutions that were purely theoretical only a few years ago are now rapidly becoming a reality, resulting in the potential to create a more flexible and efficient supply chain. For suppliers, it’s important that we continue to innovate, keep pace, and ensure that our expertise is as much a part of what we can deliver as our products.