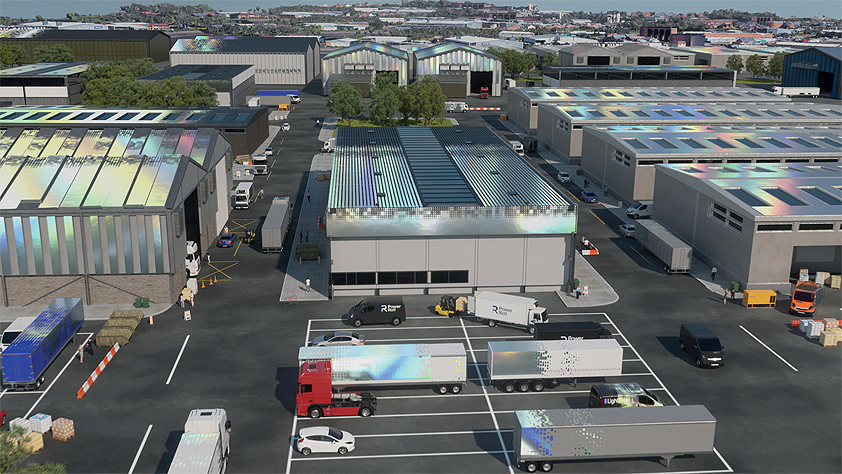 Comercial rooftops should be ideal for solar, but many are unable to support the weight of traditional silicon solar PV panels. Technology and cost breakthroughs, however, now mean that flexible lightweight solar film can be deployed economically on non-load-bearing rooftops, opening up new opportunities for warehouses and distribution centres everywhere.

Achieving net-zero targets
2050 may seem a long way off, but for the world to reach net-zero emissions in 30 years’ time, we need to invest heavily in renewable energy generation now. For example, the UK’s Climate Change Committee (CCC) in its Sixth Carbon Budget report calls on the country to ‘front-load’ decarbonisation. More needs to happen in the 2020s than in the 2040s with UK electricity production reaching net-zero by 2035.

In terms of renewable capacity, the UK’s energy systems operator reports that it needs to build 3GW of wind and 1.4GW of solar every year until 2050. This needs to be combined with energy storage to provide the flexibility to meet the country’s energy requirements.

The rise of renewables
Thanks to advances in technology and economies of scale, wind and solar are now among the cheapest ways to add generation capacity to the grid. Both technologies are now being deployed without the need for subsidies and are attractive to investors. There is also strong support for renewables from the public. Statistics released by the UK government in 2019 showed that solar energy had an 85 percent approval rate with the public.

With growing demand for more solar capacity and a good case for investment, the problem of increasing capacity should take care of itself. However, there is one barrier to the rapid deployment of solar energy we urgently need to address, especially in densely populated countries, and that is the issue of space. While general public sentiment is very much in favour of solar, local communities are not always so happy to play host to utility-scale solar farms when they are in their back yards

The roof-space opportunity
Driven largely by the continued growth of online retail, warehouse space has grown dramatically over recent years. In the UK alone, the Warehousing Association estimates the total warehouse roofspace to be around 420 million sq ft, and forecasts suggest the spike in online sales during 2020 alone will create demand for an additional 30 million sq ft of space.

However, many commercial rooftops are not load-bearing structures and were not designed to support heavy, rigid silicon PV panels. Also, installing solar panels on rooftops is expensive. Flexible PV panels are currently available and lighter than rival silicon panels, but cost up to five-times more than their silicon PV alternatives. At around $1.00/Watt to manufacture, flexible PV is uncompetitive for use at scale. With better and cheaper technology, however, we can fully exploit the roof-space opportunity and take the pressure off greenfield sites for solar farms.

Emerging technology promises an affordable, flexible and lightweight solution
While silicon PV is not suited to many rooftop applications, and conventional flexible PV can be prohibitively expensive, emerging solar film technology could well provide the solution.

We can manufacture solar film using well-understood roll-to-roll production techniques that will dramatically reduce the cost of solar film PV and deliver the lowest cost energy of any solar technology currently available. Power Roll’s approach to manufacturing solar film, which uses widely available materials, yields a carbon footprint that is up to 20 times lower and a manufacturing cost around ten times lower than silicon PV. Such an approach will enable solar film to replace traditional silicon PV especially for non-load-bearing roofs, such as warehouses and agricultural sheds. This opens up a huge opportunity, enabling countries to stay on track with expanding solar generation, without impacting on greenfield sites or risking loss of public support.

By installing solar film on commercial roof spaces we can also generate energy where it will be used by businesses, reducing their costs and simplifying power distribution.

As Britain’s National Grid Future Energy Scenario makes clear, we need to urgently invest in increasing solar energy capacity if we are to reach net-zero by 2050. To achieve that in the most efficient way possible, without losing the public’s goodwill towards solar, we must harness the latest technology solutions to enable us to make use of more roof space and save our green fields and agricultural land. Emerging solar film PV solutions will enable us to do just that.