As the first professional horizontal directional drilling (HDD) contractor in Egypt, FlowTex Egypt has long been credited with introducing this technology to the local market at its foundation in 1997.

Over the years the company has continued to grow in Egypt, and since 2004 has begun taking on projects in other countries with regional expansion into the Middle East and bordering areas.

“Whilst the first steps were taken and our basic reputation built in Egypt, we are presently working worldwide with key markets being the Middle East, northern Africa and western Asia,” explains Carsten Fischbach, Sr. projects manager at FlowTex Egypt. “However, further expansion is part of our development plan and we hope to successfully stretch our global operational area within the coming years.”

Today FlowTex Egypt has more than 120 employees running a fleet of ten HDD rig spreads, with capacities ranging from 12 to 450-tonnes. In addition to its main offices in Egypt, early this year the company opened a new subsidiary in the United Arab Emirates (UAE). This includes an office in Abu rightDhabi and an equipment base from which FlowTex Egypt is running both regional and international operations.

Whilst FlowTex Egypt’s role being the HDD-pioneers in Egypt has undoubtedly defined it to date, Carsten is keen to point out that it is the company’s other strengths that maintain this reputation: “Being the first one entering a new business field is certainly a benefit at the beginning. This has to be acknowledged as one of the reasons why FlowTex Egypt is leading the 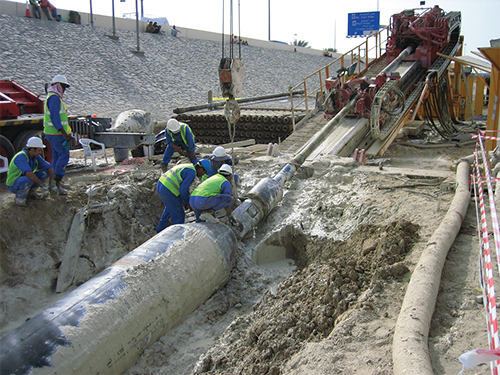 local Egyptian market and has been driving the trenchless pipeline industry in the country from the very start. However, a monopoly never remains for long and over the years a number of companies have been following our lead, cosequently causing business to become more competitive.

“Looking back I believe it is mainly the strong commitment of both our management and staff to achieve something long-lasting and to make FlowTex Egypt known to the world, that has been the driving force in developing the company. The constant growth proves that this commitment does pay off in the end.”

FlowTex Egypt is also historically noteable as the only company in the world that has crossed the Suez Canal in Egypt 67 times in the supply of Sinai with utilities such as gas, fuel, water, and electrical and telephone cables. Given the nature of HDD as a highly specialised service that is usually integrated into a project on a sub-contract level, the majority of FlowTex Egypt’s customers are main contractors involved in oil and gas pipeline construction, as well as water and power transmission lines and environmental applications.

In terms of more recent examples of the company’s project performance, Carsten says: “Between 2009 and 2012 FlowTex Egypt has been contracted for all major water course crossings by HDD as part of Abu Dhabi’s new main ring network for portable water supply to the city and surrounding islands. This massive undertaking involved the parallel operation of up to three large capacity HDD rig spreads at times to install more than ten sea water channel crossings for DN 48-inch carbon steel pipelines. This was quite an achievement with some crossing lengths reaching more than 1700 metres.”

Although HDD still forms the core of FlowTex Egypt’s portfolio, the company has not remained static in terms of its offering. As such it is now aiming to execute more HDD crossing sections on an EPC basis, including adjacent works such as civil works, pipe supply, pipeline fabrication and commissioning. In addition, FlowTex Egypt has also recently started to offer other trenchless technologies, either as an alternative to or in combination with HDD, including micro-tunnelling and auger boring. “Complete trenchless solutions, on an EPC basis, worldwide,” as Carsten summarises the key goal.

Reflecting on the use of HDD and the growth of this activity, Carsten shares his thoughts on FlowTex Egypt’s ability to remain a leading figure in the market: “In general the HDD business has always been characterised and driven by a constant pushing of limits with crossings getting longer and pipes getting bigger every year. At the same time competition has increased along with the availability of equipment and support of machine manufacturers to newcomers in the industry.

“In the end our work is mostly a direct add-on to the pipeline business and accordingly markets and opportunities follow those of the oil and gas industry. Therefore we anticipate a shifting of markets towards areas of increasing development such as Africa and South America, whilst facing a slowdown in former boom areas like the Middle East. It is my hope that the company continues to grow slowly but steadily as we have seen so far, with our areas of operation expanding as well as diversifying the services offered. At the same time we are tying to constantly adapt by following the requirements of our customers in order to build a strong and lasting relationship,” he concludes.