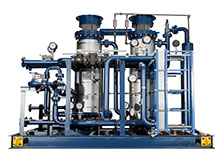 Knelson Technologies joined the FLSmidth Group in 2011 with the merger’s ownership transition finalized earlier this year. Cement, minerals and engineering conglomerate FLSmidth Group is based in Copenhagen, Denmark, and employs more than 15,000 professionals with offices in more than 50 nations. It acquired Knelson Technologies of British Columbia to improve its flow sheet for mineral processing and mines, thereby enhancing its precious metal offerings. The action also supports the group’s ability to serve all customers’ needs for process technology and integrated solutions, the company says.

“Gravity separation for precious minerals was not in their portfolio and we are the world leader,” says Pat Thornton, facility manager.

Gravity separators use enhanced gravity through spinning feed material to separate higher specific gravity minerals out of a slurry. It is “like an oversized washing machine or centrifuge that you feed a slurry containing precious minerals like gold into the machine and spins like a washing machine” to separate out the sought materials.

The Langley, British Columbia plant produces about 100 concentrators per year. It has supplied 3,000 installations to major gold, platinum and silver mining companies in 70 countries worldwide with another office site in Irkutsk, Russia.

The mainstay of its line is the KC-QS48, a 48-inch-diameter concentrator. It produces about 30 to 40 of these “work horses” per year. However, it also can manufacture 70-inch units capable of processing 1,000 tons per hour and units are as small as 3-inches in diameter. With tests performed at its in-house lab, the company can perform a Gravity Recoverable Gold, GRG, test to analyze the gold content of ore and determine the effective recovery rate expected by an installation. “We have been very successful at that,” Thornton says. Requiring no chemical reagents, the Knelson Concentrator provides simple, reliable and trouble-free operation in an environmentally safe manner.

Created from Scratch
Knelson Technologies founder Byron Knelson utilized the principle of enhanced gravity separation to create the process from scratch. He developed the unique process 30 years ago. “It was brand new at the time,” Thornton says. He did this after researching an old patent that he then enhanced with his own ideas. The prototype was successful and was utilized in placer operations. Over time, placer miners success were noticed by the large hard rock mining companies and eventually led to Knelson designing a suitable unit for the riggers of this new industry.

In addition to the concentrator, the plant also provides many other solutions and services such as assembly, automation, testing and manufacturing other mining and industrial items, Thornton says. With so many customers around the world, it has become something of an expert in logistics and shipping. “Everything we design and build fits into shipping containers,” Thornton says. “For anything larger than a shipping container, it is designed to break apart and fit. So, we are not limited by extremely high-shipping prices. We can ship worldwide at a relatively low cost.”

Thornton has recently started an enhanced focus on lean manufacturing and continuous improvement. While it has always been a topic in the workplace, it would often be delegated to secondary status. “We are now in the process of value stream mapping our core product for improvements,” he says. When lean manufacturing improvements are delegated to merely a tertiary role, on the third or fourth rung of someone’s job description, they quickly fade to background against the onslaught on daily tasks. “It just didn’t get the focus needed so we are now reinvigorating that program,” he explains.

Bright Future
Despite challenges in the overall mining market, the future looks bright.

“Mining in general is very depressed now,” Thornton says. “We in the gold market found a little niche and have been fairly isolated from rest of the mineral processing sector. Last year was our best year ever for revenue and profits.” Although a reduction is expected from this previous high in 2014, “we are on pace to beat our budget,” Thornton says.