Getting ready for an LNG-fuelled future

Fluxys Belgium’s active involvement in the LNG market in the past couple of years has brought the company to the forefront of the oil and gas industry, as a leading proponent of the development of LNG as a cleaner alternative fuel. This has become possible thanks to the evolution of Fluxys’ infrastructure, and its participation in numerous projects, both national and international, that 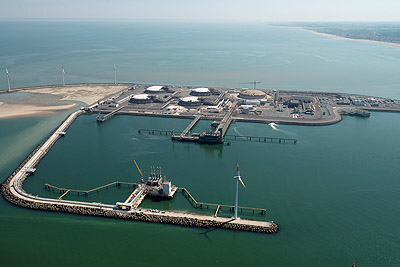 have raised the company’s profile and kept it busy over the past months.

Historically known as an independent operator of both the natural gas transmission grid, and the storage infrastructure in Belgium, Fluxys Belgium has strengthened its focus specifically to the exploration of the opportunities LNG opens up for the industry. The Company Spokesman, Laurent Remy, happily discusses the latest developments the Fluxys-operated Zeebrugge LNG terminal has seen.

“One of the most important infrastructure projects for us, was the construction of a second jetty at our LNG terminal. We have had the first one for over 30 years, since the terminal opened in 1987, and although it can accommodate a wide range of LNG vessels, it is limited to a capacity range of between 7000 and 266,000 cubic metres. The second jetty was built, so that it can enable us to receive smaller LNG carriers (within the range 2000 – 215,000 cubic metres), such as LNG bunkering vessels. It was commissioned in late December 2016, and will also allow us to accommodate either direct LNG ship-to-ship transfers (from April 2018 onwards), or shipstorage- ship transfers (as from mid-2019),” Laurent explains.

Placing special emphasis on creating reliable infrastructure for small-scale LNG vessels, is part of Fluxys’ strategic vision for pushing towards the promotion of LNG as a clean marine fuel, as it expects to attract a larger number of ships. “The International Maritime Organization (IMO) has imposed stricter limitations on sulphur emissions in the so-called Emission Control Areas in 2015 (max 0.1 per cent sulphur content), and further agreed on a global fuel sulphur limit of 0.5 per cent which will enter into force in 2020. This means that LNG will become a solution of choice (either for new builds or for retrofits) for shipowners who have to comply with the new requirements,” Laurent clarifies.

ENGIE Zeebrugge
In February 2017, Fluxys became one of the four international companies that have taken delivery of the world’s first purpose-built LNG bunkering vessel, named ENGIE Zeebrugge. Laurent gives his account of the operation: “We invested in this vessel, because we believe in the growth of LNG in the bunker markets, for which the challenge is to develop sufficient supply infrastructure to support the increasing number of LNG-fueled ships that are expected to come into operation. According to a recent study, in March 2016, there were 74 LNG-powered vessels (that are not LNG carriers) in operation, and 88 on order. Only a year later, the figures have increased to 103 in operation, and 97 on order. It has been forecast by DNV GL that in 2020 the LNG-fuelled fleet will comprise between 400 and 600 vessels. Against that background, the investment we made perfectly fits our strategy to support the development of the nascent small-scale LNG market,” he suggests.

For Laurent, ENGIE Zeebrugge holds another advantage worth mentioning, and that is its capability of saving time for big vessels’ operators. He elaborates: “LNGpowered vessels previously used to depend on fixed locations to do the bunkering, so the operators were keen to find a way to do that during their regular procedures instead. That was the case for ship-owning company United European Car Carriers, for which ENGIE Zeebrugge performed the first shipto- ship bunkering operation in June 2017 at the Zeebrugge LNG terminal, which wanted the bunkering to happen at the same time as the cargo operations are taking place. ENGIE Zeebrugge’s value lies in its ability to load the LNG from the terminal, and then go alongside the LNG-powered ships to provide the bunkering, thus reducing the operator’s waiting time.”

Early transhipment
Fluxys proved its prowess in responding effectively to emerging market trends once again, when it set out to make the necessary preparations that would bolster its LNG transhipment services. 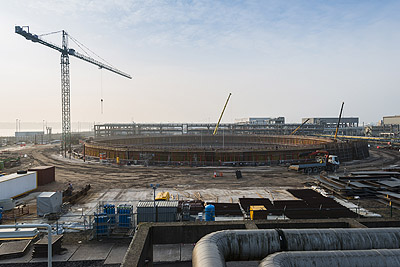 The company signed in 2015 a 20-year contract – LNG Transhipment Services Agreement (LTSA) – with Yamal Trade that will start in mid-2019, once Fluxys’ fifth tank is commissioned. Laurent details: “Our Commercial department spotted an interest in early transhipment last year, i.e., in transhipment berthing rights allowing ship-to-ship transfer without intermediate storage. For Yamal, it will also include transhipment storage allowing shipstorage- ship transfer, but before this contract starts, we are offering 150 transhipment berthing rights between 1 April 2018 and 31 December 2018. Following the submission and the approval of a number of regulatory documents to the Commission for Electricity and Gas Regulation (CREG) in Q4 2017, we organised a subscription window in January this year to commercialise those transhipment berthing rights, which are now available on a first come first served basis.

“The exact date of the first transhipment depends on the outcome of the bookings shippers make between now and April. There is a new trend towards increased optimisation of capacity portfolios we are confronted with, meaning that our customers are becoming more reluctant to place long-term bookings and arrange short-term capacity bookings instead, because they first want to see what the scale of their job will be, the number of vessels they will need, and what and where they will be expected to deliver. We are nevertheless confident that as the year progresses, our slots will be filled. We have already read about cargos leaving the Yamal Peninsula in Siberia that are either being discharged, or transhipped in neighbouring terminals, which fosters our belief that the market is interested in this type of service.”

Extra connections
To further facilitate its customers’ experience, Fluxys took a final investment decision (FID) in 2017 for the construction of its second truck loading station, which is expected to begin operation in the second half of 2018. It will double the existing capacity, from 4000 to 8000 truck loadings per annum, and will reduce the queuing times for customers loading their LNG cargo. “We see that most clients prefer coming in the morning or the early afternoon, which creates queues during the day that make them wait. We aim to address the issue, and even though we are still far from reaching the yearly technical maximum, we would rather expand our capacity, just to make the whole process more convenient for our customers. If we can sell more truck loadings, then all the better,” Laurent adds.

While inevitably occupied with the construction works still going on at its LNG terminal in Zeebrugge, 2018 will also see Fluxys Belgium play its part in the L/H Conversion project, which will have a palpable impact on the gas industry in North West Europe. Since Belgium, France and Germany are all being supplied by lowcalorific gas from the Netherlands, and the Dutch authorities are planning to reduce its export from 2024 (2020 for Germany) to 2030, there rose a necessity to switch to natural gas from other sources (high-calorific gas). Zeebrugge is in that respect particularly well placed: on top of the LNG terminal, the zone serves as a crossroads of cross-border high-calorific gas flows: flows along the east/west axis from Germany to the United Kingdom, flows along the north/south axis from Norway and flows from France. The announcement of the Netherlands’ plan to cut out export of low-calorific gas dates back to 2012. Since then, the Belgian grid operators have worked alongside the Belgian Government to plan a conversion scheme that will successfully convert 1.6 million households and SME connections in the years to come. This year will mark the beginning of the first large-scale conversion, during which more than 50,000 customers will be switched to high-calorific gas. Laurent points to where Fluxys gets in the picture: “Our commitment is mainly to build extra connections between the lowcalorific and high-calorific gas networks, which are currently operated separately, to adapt certain pressure reducing stations for an optimal market functioning after conversion and to build additional separations between the networks during the different phases of the conversion. It is not a very big job for us, but the entire conversion is a huge project for the country since it is a complex process involving a lot of actors.”