Fluxys is a Belgium-based, fully independent gas infrastructure group that is independent from any producer or supplier of gas and electricity. Fluxys Belgium has for that matter been certified by the Belgian national regulatory authority Commission de Régulation de l’Electricité et du Gaz (CREG), in accordance with the full ownership unbundling model. The company is a major gas transit operator and its offering combines gas transmission, gas storage and terminalling of liquefied natural gas (LNG). The company is present across Europe and is focused on delivering safe, efficient and sustainable operations, while ensuring quality services in line with market expectations and creating long-term value for its shareholders. The business was founded during 2001 as the result 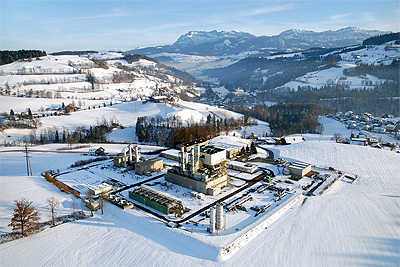 of a voluntary demerger of the vertically integrated Belgian gas company Distrigas, which was established in 1929.

Further to its pipeline, storage and LNG terminalling assets within Belgium, which are owned and operated by the NYSE Euronext listed Fluxys Belgium, Fluxys Group partnerships also include ownership in the Interconnector and BBL pipelines linking the UK with mainland Europe; the Dunkirk LNG terminal in France; the NEL and TENP pipelines in Germany; the Transitgas pipeline in Switzerland; the Swedegas infrastructure in Sweden; and the Trans Adriatic Pipeline (TAP)from Greece to Italy to be constructed so as tobring gas coming from Azerbaijan to Europe.

Within Belgium, Fluxys Belgium operates a network of about 4100 km of underground pipelines, with a capacity of around 121 billion cubic metres (BCM) per year and an exit capacity of 82 BCM per year. Its network is used to transmit natural gas for consumption in Belgium, with 17 distribution system operators that are responsible for distributing natural gas to homes and small and medium sized enterprises (SMEs). The network also distributes to around 250 industrial end consumers and power stations, with a total yearly consumption of around 15 BCM per year. The network is also used for border-to-border transmission for redelivery at the borders and trading on other gas trading places or consumption on end user markets throughout Europe. The company’s grid is connected to all available gas sources for the EU market and its users gain optimum destination flexibility for their gas flows. “The capacity of the Fluxys LNG Terminal in Zeebrugge is nine BCM per year with a storage capacity of 380,000 m³ LNG, which will be expanded to 560,000 m³ LNG upon commissioning of a fifth cryogenic tank that is currently being built in the framework of expanded transhipment services to be offered from 2018 onwards,” adds Company Spokesman, Laurent Remy. “And when it comes to storage, the company’s capacity in Belgium is located at an underground aquifer in Loenhout and amounts to circa 750 Mio m³(n).”

Fluxys is committed to further developing its international infrastructure and during May 2016 Pascal De Buck, CEO of Fluxys Belgium and Thierry Trouvé, CEO of GRTgaz, inaugurated in Pitgam (Nord) a new gas transmission pipeline connecting France and Belgium. The project was initiated in 2010, as a new link between the two countries, and is another step towards creating a more integrated gas market in Northwest Europe. “In Belgium the project involved building the Alveringem regulating station located close to the French border; a new interconnection station at Maldegem connecting the Alveringem- Maldegem pipeline to our existing VTN bi-directional trunk line connecting the UK, German and Dutch markets; and a pipeline stretching nearly 75 km between these two sites. The total investment was around €100 million,” Laurent reveals. “In France the project involved building the Flanders Pipeline and the Hondschoote metering station at the border, and modifying the Pitgam interconnection station through an investment valued at around €85 million. These facilities will be used for non-odorised gas, enabling shippers to transmit gas from France to Belgium for the first time. They will strengthen existing links between the two markets by offering the ability to 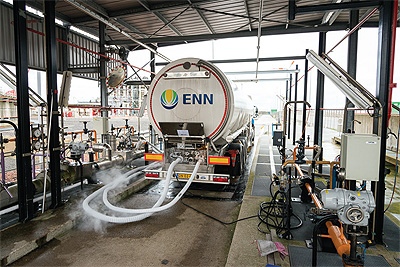 transmit up to eight BCM of natural gas per year from France to Belgium while reinforcing security of supply, diversification of sources and market integration in northwest Europe. The new facilities provide optimum destination flexibility for Dunkirk terminal users as well, allowing them to easily reach all neighbouring gas markets.”

In addition to investing in the further development of its gas storage and transmission infrastructure across Europe, Fluxys is also committed to strengthening Europe’s energy security by expanding its LNG infrastructure capacity. “As natural gas production in the European Union declines, LNG has an increasingly important role to play in safeguarding Europe’s long-term security of supply and in ensuring the necessary diversification of sources, which in turn increases competition and finally lowers the prices to the end-users. Through its activities at its Zeebrugge terminal and the terminal under construction at Dunkirk, Fluxys has built up a strong position on the LNG terminalling market. The Zeebrugge Terminal was intended as a ship unloading facility only, but we proactively developed additional services in response to demand from our users. With a second jetty nearing completion, Fluxys is developing the Zeebrugge LNG Terminal as an important hub for small-scale LNG,” Laurent concludes. During March 2016 the company announced that it had signed a framework agreement with Gazprom for co-operation in small-scale LNG distribution. “The framework agreement with Gazprom reflects the intention of the parties to collaborate on joint projects for the construction and operation of LNG receiving terminals, LNG filling stations and LNG bunkering infrastructure in Europe. Both companies are currently examining possibilities in that respect.

“During the coming years Fluxys will further extend the role of its network as cross-roads for Europe through LT profitable investments in new infrastructure and existing assets, which will prompt greater competition and impact positively on natural gas prices. We will as well promote natural gas as ideal complement to renewable energy for electricity generation and promote new technologies such as gas heat pumps, micro CHP and power to gas.”