With a history dating as far back as the 1890’s, the Forsyths Group has diversified and expanded its services to retain its renowned reputation as a designer and manufacturer of tanks, pressure vessels, skid units and pipework for the oil and gas industry.

Officially established by tradesman and foreman Alexander Forsyth in 1933 under the name A. Forsyth and Son, the family operated group today is now in its fourth generation and boasts a broad portfolio of experience in the Scotch whisky, paper, oil and gas, and the pharmaceutical industries; moreover, it developed its expertise in carbon and stainless steels, progressing into exotic metals such as titanium and super duplex. This constant drive for diversification and reinvestment has resulted in ongoing success for the company as well as a strong reputation within the industry for delivering a superior service.

As a trusted supplier of steelwork and piping solutions to the beverage and oil and gas industries, Forsyths benefits from state-of-the-art load out facilities at its dockyard in Buckie as well as its dedicated clean room facility in Rothes, North East Scotland. To strengthen its capabilities and meet the future demands of the buoyant oil and gas market, the company invested in a £3.3 million manufacturing expansion project in 2012. This development means it can now successfully meet the needs of its existing customer base, while also being fully prepared for increasing significant international interest. Indeed, with strong demand growing in areas such as Canada, the US, Brazil, Japan, Thailand, Korea, Singapore and South Africa, the company has spurned complacency and continued the momentum it has gained, with investments reaching more than £5 million in total over the last five years.

Notwithstanding these notable developments, Forsyths has been keen to further expand its operations in its Buckie facility, which will thus enable it to remain competitive in the future North Sea renewable and offshore markets. Discussing the ongoing enhancements of the company and its facilities since it was previously featured in European Oil & Gas Magazine in 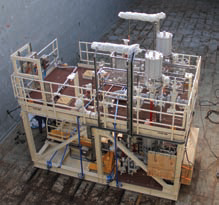 September 2013, chairman Richard Forsyth senior begins: “Forsyths continues to reinvest in several areas; we aim to purchase further property in Rothes and more significantly in Buckie where a further fabrication unit is planned for quayside enhancements. There is also a focus on the continued recruitment and training of staff; this will involve the establishment of an in-house welding and pipe fabrication school. Meanwhile, we will also modernise our existing workshops and plant, which will include the addition of state-of-the-art cutting and welding machines. On top of this, we will of course remain committed to exceptional health and safety standards in the workplace.”

Boasting an enviable roster of blue chip customers in the oil and gas industry, Forsyths’ most recent projects include its biggest to date, supplying Petrofac and Cameron on the Laggan Tormore field. Discussing this major project, Richard states: “The skid packages produced for the Laggan Tormore project in Shetland has been, by far, Forsyths’ biggest single contract to date.” The scope of the project grew substantially through the contract’s duration in areas such as the physical size of the packages and commercial value; this created a number of challenges for Forsyths. For example, we had to accommodate for the extra space that was required and also had to resource the appropriate skilled tradesmen. Despite these issues, these requirements were achieved and reports from the site commented on the high quality of workmanship; many lessons were learned through this contract and we now have a much stronger and more efficient base, particularly in the quality control and documentation department.”

Proud to provide satisfaction through the utilisation of long-term experience, quality workmanship and punctual delivery, the company has recently successfully fabricated equipment and structures for the BP-operated Quad 204 project on the Schiehallion field and is currently in the finishing stages of a major contract for repeat customer MI Swaco on the Hebron Field, Norway. “Our contracts for BP’s Quad 204 and Norway’s Hebron Field, much via MI Swaco, were made up of similar type skid package work, but also included a huge pressure vessel for Hebron; this was manufactured in duplex material and fabricated in our modern, ‘clean’, workshop in Rothes. It weighed approximately 40 tonnes and was ideal for our new facility, which has a capacity of 80 tonnes.”

Just one example of how the ISO 9001:2008 certified company’s major investment into facilities has proven worthwhile, the successful MI Swaco project required the use of Forsyths’ 900 square metre dedicated clean shop, which is used for exotic materials such as titanium, duplex and super duplex; it is set up as a carbon free environment with dedicated welding plant.

As the oil and gas segment of the business continues to witness steady growth with a new contract from Siemens Norway for the construction of three skid packages, the distillation segment has also witnessed noticeable demand from Asia and North America due to growth and major investments in the industry. Moreover, with the development of the West Coast fields and the emergence of fracking in the US and potentially the UK, the future looks positive for Forsyths as it continues to adapt itself to the demands of its customers.