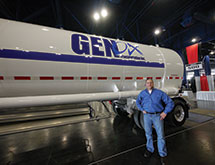 To understand GenOx Transportation Inc.’s business, it helps to think of astronauts working in the International Space Station.

“At the International Space Station, an astronaut goes outside at 250 below zero, floating into space, and there is technology to keep the astronauts comfortable in extreme temperatures,” Mathews says. “It is the same things for our trailers. We keep the trailer in cryogenic temperatures for long periods to avoid the heat of the sun and motion so it can sit for days with no loss inside the vessel. Everything we haul is well under 300 degrees below zero.” He notes that GenOx serves multiple markets and applications, including manufacturing, food, medical and welding.

Controlled Growth
CEO Kevin Mathews and his father, Chairman Russ Mathews, started the company in 2001. The elder Mathews had worked in the cryogenics and industrial gas industry since the 1950s for the company today known as Linde Group.

“We use a controlled growth strategy,” Mathews says. “We are very customer-focused. We are here for the customer; the customer is not here for us. I repeat that to myself many times a day to keep myself focused.”

That focus makes GenOx Transportation’s customer service stand out. “There are a lot of little things that add up,” Mathews says. “We have well-maintained and clean equipment that looks good going in and out. The drivers have the equipment they need to get the job done.”

GenOx Transportation also utilizes proactive maintenance programs to avert mechanical difficulties. That includes continual investments in equipment. “We don’t keep our tractors in the fleet more than three to three-and-a-half years,” Mathews says. “That means we replace one-third of our fleet each year. The new tractors have newer technology with better safety and fuel efficiency. A new fleet is more dependable and reliable, [and] reliability is important to our customers.”

The company has the ability to respond immediately to calls. “What we specialize in is last-minute need,” Mathews explains. “We offer on-demand service, whether they need one or 30 trucks.”

GenOx Transportation’s trucks and trailers cost $400,000, so the company “offers a unique service to have all these guys and equipment ready for last-minute needs,” he says. “Not many companies allocate that many assets and support.”

The business has changed over the years with better technology and communications now available. The trucks have improved sensors and mechanical failures are easier to correct with regular service. All of this has helped the industry keep up with growth.

“Historically, our industry grows twice as fast as gross domestic product and it’s been that way for decades,” Mathews says. “So, if GDP grows 2 percent, we will grow closer to 4 percent. Even in a recession people are still going to eat, buy frozen food and drink beverages. They will still get sick and go to the hospital and there will still be cars and buildings built.

“The products are still being used. Every business segment of the economy uses them in some form or another, so if one segment slow something else picks up.”

GenOx is a leader in liquefied natural gas (LNG) transport. It operates 30 LNG trailers with more to come. Nationwide, about 5 percent of new trucks produced run on LNG, up from 1 percent last year.

“Our LNG transport customers save up to 40 percent over traditional diesel-fueled transport on fuel costs through higher efficiency and increased transport capabilities,” Mathews says. “Lower emissions, quieter operations and myriad environmental benefits are also benefits of LNG-fueled transportation. Best of all, LNG is abundant and produced right here in America.”

Driving Experience
Although many in the trucking business are contending with driver shortages, GenOx Transportation’s niche provides for successful recruitment and retention with little turnover. Many drivers are military veterans and its average driver age is 45. “We take pride that despite a high industry-average driver turnover rate, GenOx has a turnover rate of about 10 percent,” Mathews says. “We know how to attract and retain the best drivers. They are well rewarded for their professionalism and consider themselves partners in making sure the client’s needs are met with the highest standards of safety and service.”

GenOx Transportation efforts have been well received by trucking industry as it frequently wins a litany of awards and recognitions. For example, GenOx Transportation has just received the Compressed Gas Associations prestigious Fleet Safety Excellence Award, sponsored by Praxair.