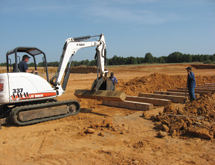 Like many companies, Geo Logic Environmental Services has faced the challenge of increased competition and changing demand for its services since the onset of the global recession in 2008. In particular, the Longview, Texas-based consultant and professional services firm has seen many of its clients in the oil and gas industries start to perform internally several of the services it offers.

For Geo Logic, adjusting to this market change has meant increasing its own knowledge of environmental regulations and improving its services. “What we want to do as a consultant is know as much about the industry rules and regulations as the people who developed them,” COO Wayne Gilbert says. “Our aim is to have our client be environmentally compliant while being customer-friendly.”

Gilbert feels the company’s ability to focus on industry regulations, as well as its experienced staff and quick turnaround times, make it a preferable alternative for companies that would otherwise try to balance those duties with their core competencies. “When companies internalize functions with a limited staff, what they’re doing is loading up their people,” he adds. “They can’t be as focused on regulatory issues as we can be if their primary job is oil and gas production.”

The company, founded in 1995 by engineering geologist and environmental scientist Bill Godsey, offers a diverse range of consulting services including permitting, stormwater plans and groundwater systems design. Much of the company’s work is centered in the Texas oil and gas production market, with services also offered to producers in the as other parts of the country where hydraulic fracturing is predominant. Geo Logic also operates a construction company, Anderson Building Solutions, as well as Woodlawn Fabrication, a frac tank refurbishing company.

Building Trust
Geo Logic’s clients include private oil, gas and mining companies as well as public entities including municipalities. The company enjoys a mix of veteran clients, for whom it develops long-term plans, as well as new clients who seek it out for help in understanding new state and federal regulations.

All of Geo Logic’s staff is experienced in a variety of disciplines in addition to oil and gas including geology, chemical engineering and waste management compliance. Godsey, the company’s owner and CEO, has more than 30 years of experience in geology and environmental science.

The company’s other executive personnel include Head Geologist Nate Upchurch, Director of Administration Terry Rhame, Safety Director Dennis Hammond and Field Services Supervisor Jose Rojas. All executive staff members are closely involved with the company’s projects, and the company itself is involved with organizations including the Longview Economic Development Corporation and the East Texas Geological Society.