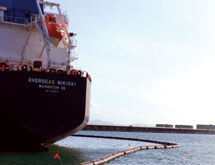 The West Coast’s largest commercial diving company is continuing to expand its reach in the United States and internationally.

The Houston office opened in 2011 in response to client needs, as it was previously serving the area out of the Seattle office and saw an increased demand for its services along the Gulf. This kind of responsiveness and care for its clients is one of Global Diving & Salvage’s hallmarks, President Devon Grennan says.

The company’s privately held status gives it the internal flexibility to seek work in different markets, which has helped in light of the slowdown in the offshore oil and gas industry.

“We’ve been able to weather the economy quite well through our different regions and service lines,” Grennan says.

Drawing on Experience
Outside of the oil and gas industry, Global Diving & Salvage’s marine construction division is known for its work on aqueducts, dams, bridges, harbors, reservoirs and similar projects. The company’s emergency response division is called upon for salvage operations, vessel and cargo recovery and hazardous material removal, among other services.

Global Diving & Salvage’s staff uses a number of specialized pieces of portable equipment to do its job, including four saturation diving systems. These systems are capable of diving up to 1,000 feet below the surface, Grennan says.

While the company’s fleet of equipment certainly helps it distinguish itself from competitors, the people using that equipment give Global Diving & Salvage an even bigger advantage.

The company actively looks for staff members with backgrounds in rigging, fabrication and construction trades. It builds on that experience through an internal training and competency model that includes skill evaluations and staff development programs.

“Our diving personnel have a level of expertise, qualification and well-rounded experience that we continue to build on project by project,” he adds.

Global Diving & Salvage is expanding its competency scheme to include training that would allow its staff to meet international quality standards. The company performs work in the Middle East and Far East, and hopes to expand its global footprint even further.

“Our vision is to continue to look closely at our strategic service lines and regional footprint, and look toward more of an international market,” according to Grennan.