Established in January 2005 in line with the European directives on the European electricity and gas market, and operating with a similar structure to a public limited company, GRTgaz is 75 per cent owned by GDF Suez, with the remaining 25 per cent stake retained by Société d’Infrastructures Gazières, a public consortium comprised of CNP Assurances, CDC Infrastructure and Caisse des Dépôts.

As a public utility, the company ensures the smooth running of the natural gas market in France while focusing on the interests of all consumers. These include industrial sites, and gas industrial sites and gas-fired power plants that benefit from a direct connection to the transmission network as well as households, businesses and local authorities that are supplied via distribution networks that in turn utilise the transmission network.

Able to provide access to diverse supply sources through its connection to LNG terminals on the Atlantic and Mediterranean coasts, as well as neighbouring European networks and 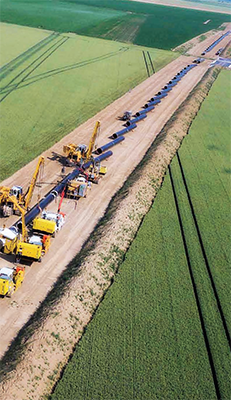 underground storage facilities, the company not only contributes to both France and Europe’s energy security, but also transmits natural gas in a safe and economical manner. Indeed, by transporting vast amounts of energy via underground pipelines, GRTgaz can protect local landscape and biodiversity while also operating as a driver of future energy solutions such as renewable gas.

Today renowned as one of the leading European operators in natural gas transmission, GRTgaz’s natural gas transmission network covers 32,246 km; this includes the main transmission network, 25 compressor stations (with an installed capacity of 525 MW), six interconnections with adjacent networks and three LNG terminal interface points. In addition, the company has complete shares over GRTgaz Deutschland GmbH, which is one of the major pipeline systems in Germany. The system, known as MEGAL, connects the Czech Republic, Germany, Austria and France and comprises of the MEGAL Nord (North) pipeline and MEGAL Süd (South) pipeline; these are interconnected by a pipeline at Rothenstadt. GRTgaz Deutschland operates the MEGAL pipeline as part of a joint venture with Open Grid Europe GmbH.

With more than 100 shipping organisations using the GRTgaz network and services for the transportation of their gas, the company serves 4475 delivery stations and supplies 16 distribution network operators, 828 industrial customers and 12 electricity power plants that are connected to the transmission network. Focused on the delivery of commercial and operational excellence, GRTgaz offers exceptional support to its customers through tailor-made, flexible services.

Indeed, by pursuing a policy of active dialogue the company can assess the needs of customers using the natural gas transmission network and make the necessary improvements. For example, having become aware of the demand for the guaranteed optimum use of existing infrastructures, the company is increasing network capacity to improve the competitiveness and security of gas supplies. In fact, GRTgaz invests over 800 million euros annually in the modernisation and development of its network, thus ensuring regional stakeholders reap the local benefits. Meanwhile, for its industrial customer base, it is developing services to enable access to the gas market, which will thus allow consumers to optimise their sourcing.

To meet future market demand, the company has a ten year development and investment plan in place, with billions of euros anticipated to be invested in securing the French gas market (between the North and South) through the construction of a new gas pipeline. Due for completion and to begin operations in 2018, the new pipeline will enable access to new supply routes, strengthen the security of natural gas supply and allow new transit capacities to develop and improve the operation of the natural gas transmission network.

As part of a plan to merge the northern and southern France market areas, GRTgaz currently has two major projects underway, one of which being the Arc de dierrey pipeline that will enable gas from other European countries to flow into the network. Work began on the approximately 310 km long, 1.20 m diameter pipeline on 17th March and is scheduled for completion in 2016. Beginning in Dierrey-Saint-Julien, the pipeline will proceed north to Cuvilly (Oise) before progressing to Voisnes (Haute Marne); it will run across three regions (Picardie, lle-de-France and Champagne-Ardenne) and five departments (Oise, Seine-et-Marne, Marne, Aube and Haute-Marne). Estimated to cost around 619 million euros, the Arc de Dierrey project is part of a major transport development programme in North and East France, which aims to enhance network flexibility and bring gas from the Dunkirk LNG terminal from 2015.

In relation to the Arc de Dierrey project, the Hauts de France II project will result in the connection of the Dunkirk methane terminal to the grid, which will thus guarantee the fluidity of natural gas flows in the northern half of France. Work began on the Hauts de France II pipeline in 2012; it will connect the future LNG terminal in Dunkirk to Cuvilly and will cover a distance of 191 km. The project is due for completion in 2015.

Ever prepared for future market demands and challenges, GRTgaz will continue to utilise its existing infrasturctures as optimally and efficiently as possible, while also expanding its transmission capacity to remain a robust, reliable and flexible option for its consumers.