Founded at the close of 1969 under the name Lakhee Development Company, GS Engineering & Construction (GS E&C), as the company is known today, has become a leading domestic construction business.

This has been achieved through remarkable growth and development of multiple different business sectors such as architecture, civil, housing, plant, and environment. In the last year the company achieved a performance of $12 billion in winning contracts and $8.2 billion in sales, as such succeeding in contracting over $10 billion for five consecutive years.

Although GS E&C’s impressive financial performance demonstrates its notable achievements, it is not the only strength that the company has to hand as Jong Soo Kim, senior vice president of environment overseas project management team, describes: “Outstanding individuals and our employees’ strong loyalty towards the company is the source of significant strength that determines the future growth of the business. Therefore, GS E&C is constantly spending time fostering employees with continuous education, as well as creating an open, healthy organisational culture.

“In the process of enriching the lifestyle of all persons concerned and communities such as stockholders, customers, internal executives, regional society and non-governmental organisations, the company’s core value is to take on social responsibilities and continue sustainable growth and development,” he continues.

In particular GS E&C is recognised for its management competence worldwide since joining the Dow Jones Sustainability Index (DJSI) World in 2010, which selects global outstanding companies by comprehensively evaluating its financial achievement, economic feasibility, environmental friendliness and sociability. GS E&C was the first construction company to be selected as the ‘most reliable company’ for two consecutive years, securing high credibility through ethical management. This demonstrates not only the image of a company with excellent construction performance, but also a potential development of intangible assets such as environmental, social and ethical values. 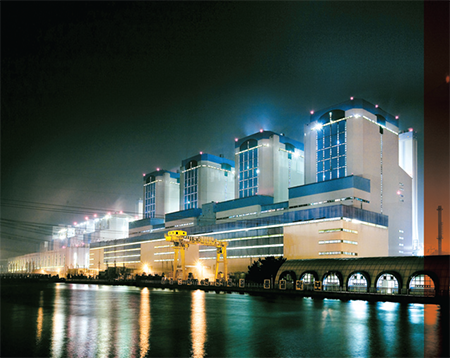 In order to overcome the restricted growth in the domestic construction market, which has slowed down along with the limits of its scale, GS E&C has found it necessary to advance into the global construction market. “At the periodic 2011 reorganisation meeting the company made secure the implementation system for sustainable future growth by selecting acceleration of autonomous and responsible management, and strengthening its foundation of global business and new business prosecution as the directions to move in,” reveals Mr. Kim.

“Continuing on from the previous year the company has constructed a new plant business team that will be responsible for seeking future growth business within the operational division, and established a Plant Advanced Technology Team to procure capabilities of new technology for future development such as biodiesel, LNG, and desalination. Moreover, the environmental sector has advanced into the first global environmental plant business in the Middle East by winning a contract for the construction of Bahrain’s BAPCO Waste Water Treatment Plant in 2010,” he adds.

This success is representative of GS E&C’s current concentration on the Middle East market, and in particular countries such as Saudi Arabia, United Arab Emirates (UAE), Kuwait, Bahrain, and Oman where experience in PJT performance has been positive. The current Middle East market is expected to bring on-stream many mega-projects going forward, and therefore GS E&C has selected corresponding countries as target markets with an intention to steadily expand market dominance through constant business activities.

Most notably, GS E&C has been jointly awarded the contract for the Petro Rabigh Construction Phase II project by Aramco, Saudi Arabia’s governmental petroleum company, and Sumitomo Chemical Co Ltd in Japan. The project details a mega multi-petroleum chemical complex being built on the cost of the Red Sea in Saudi Arabia, with an investment of approximately $3.2 billion by Aramco and Sumitomo Chemical Co. GS E&C’s role in the project consists of a number of different construction facets, which in total amounts to almost half the value of the overall project.

“Prior to being awarded the Rabigh project, GS E&C won another contract for the construction of Saudi Arabia’s Riyadh thermal power plant complex, on behalf of Saudi Electricity Company (SEC). This includes the construction of a power plant with 2088 MW production, 380 kV transformer, and power cable, for completion in May 2015. To this end a lump-sum turnkey method is being used throughout to perform design, procurements, construction and testing,” highlights Mr. Kim.

In another major development for the business, in November 2011 GS E&C acquired Spanish water treatment company Inima OHL, which represents a real step forward in its plans to diversify outside of the Middle East to grasp new opportunities in the US, Europe, and North Africa. With this it is anticipated to bring visible results within this year n sectors such as procurement and contracting in the field of desalination as set out by GS E&C.

For 2012 alone the company has set significant targets for awarded contracts, sales, and profits of $15 billion, $8.6 billion, and $504 million respectively. Describing how GS E&C has decided upon its strategy for achieving these aspirations, Mr. Kim concludes: “Given the competitive market environment, we have judged it necessary to put a lot of thought into recognising what kind of competitiveness is needed for sustainability over survival and how to strengthen it.

“As such, this year’s working policy was chosen as a balance of growth and value management, and selected strengthening of business competiveness is the first aspect that is to be emphasised and accelerated. This means evenly improving competence including sales, price, technology competiveness, and project performance, which has the ultimate intention of expanding the chances of winning contracts. For this purpose GS E&C continues to accelerate in its development to be in the global top tier through effective improvement of performance and competence in applicable fields.”