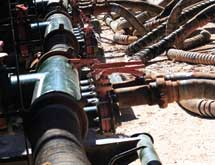 Oil production is up, and because of that Jim Henry, founder and owner of Henry Resources LLC, says there is room for everyone in the game of shale resource plays.

The company has been in the oil business for the past 44 years, specializing in the Permian Basin. The basin, largely contained within western Texas and southeast New Mexico, covers an area 250 miles wide and 300 miles long.

Henry Resources started in the area as a consultant, and then served as a contract operator of oil wells and today is an independent oil producer. For the first time since 1973, he says the U.S. oil market has finally increased oil production. In the 1970s, the U.S. peaked at 10 million barrels of oil per day. It went on a steady decline for the next 30 years and bottomed out in about 2003 at 5.5 million barrels. Then, thanks to the new fracture stimulation technology, it is now producing 7.3 million.

“If you saw the rock out here, it looks like granite, but you can get oil out of these very tight formations, and the person who did it first was George P. Mitchell from Houston,” Henry says. “He figured out how to frac these really tight formations. Many companies are larger than Mitchell, but it was Mitchell who stayed in one area, knew the area well, and finally figured out how to frac these formations after trying for 18 years.”

Tailored for Performance
As pioneering as the technology is, Henry says the real story comes from Mitchell’s willingness to share the information across the industry, which has led to a revolution in oil and gas production. Henry Petroleum, the predecessor to Henry Resources, adopted the technology and was one of the first to adapt it to the Permian Basin in a big way, specifically in the region’s Wolfberry play. The play is a combination of the Wolfcamp which is comprised of inter-bedded shale, limestone and siltstone, and the Spraberry formation comprised of shale, mudstone and sandstone intervals.

Henry Resources was the first company to discover the Wolfberry was productive over a large area. Henry says this is the largest discovery in the Permian Basin in the past 50 years. The company acquired a large acreage position, built the company up to 100 employees and sold its assets in 2008 then again in 2010. Today, Henry Resources is a 40-employee company with more than 320 wells and running three drilling rigs with gross production of about 8,000 barrels of oil per day and 16,750 MCF of gas per day.

“Henry Resources’ strategy is to do what a typical independent operator does, which is to find that extra 80 or 120 acre tracts and if you’re lucky maybe find a 320-acre half section to lease from a larger operator to drill,” President Danny Campbell explains. “Sometimes we’ll even partner with the larger companies to help reduce their risk and test things out. Henry Resources has always been a win-win company throughout its 40-plus years.”

Cutting Costs
Because Henry Resources has specialized in the Spraberry formation for the past 40 years, the company holds vast knowledge of how best to drill in the area. Just like Mitchell shared fracture stimulation technology with the rest of the world, Henry Resources is willing to share its knowledge with others in the Permian Basin, making it a valuable partner. Because of its experience and relationships with local vendors, it’s also able to reduce drilling, completion, and production costs. Henry Resources has partnered with many companies to test and perfect technology and processes.

“Now that there are so many other competent operators in the Wolfberry, we are learning from them,” Henry says. “The industry has learned how to drill wells in half the time it took us 10 years ago. Also, we have been able to do away with the intermediate casing string, which has saved thousands of dollars on each well.”