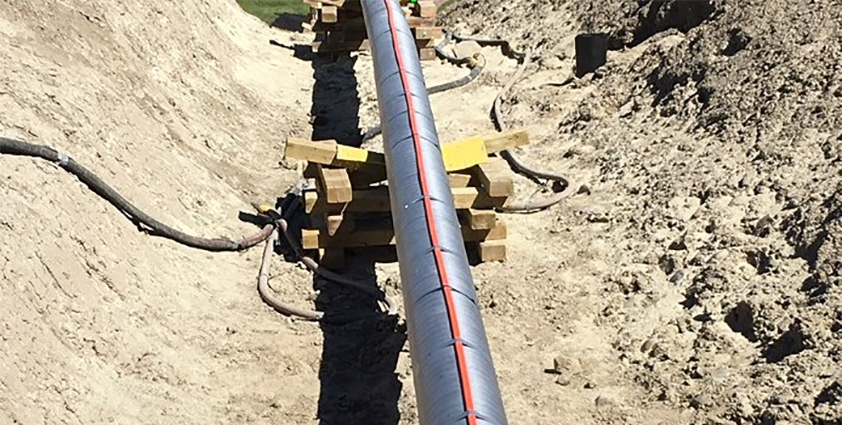 Hifi Engineering of Calgary can detect leaks within a ten-meter radius of pipelines that are thousands of miles long.

Knowing if there is a leak in a pipeline is good. Knowing where that leak is located is a lot better.

“We can tell where the leak is detected and when,” says Steven Koles, president of Hifi Engineering in Calgary, Alberta, Canada. Hifi uses a specialized fiber-optic sensing technology to measure sound, temperature changes and kinetic energy – movement and vibration – in pipelines.

fiber-optic transmits data as pulses of light that are sent through a strand made of glass or plastic – as opposed to an electrical pulse being send through a metal wire. Optical fiber can carry more data and is less likely to have electromagnetic interference. Specialized fiber-optic sensors differ from conventional telecom fiber-optics as they are designed for sensing, not for communications.

“We are all about high-signal to [background] noise ratio,” Koles says. “Nobody is doing what we are doing in the same high-fidelity way.” 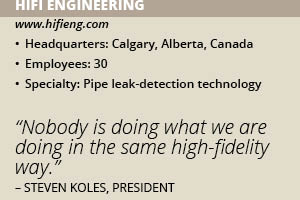 Within 10 Meters
“Conventional leak detection systems use a flow meter,” Koles says. “That’s what they traditionally used for 25 years.”

Also, sensitivity to leaks using flow meters can be plus or minus three percent, Koles says. “You could have a significant leak that is below that threshold.”

Hifi can narrow down the leak location to a 10-meter radius. But that’s not all. “We can detect all kinds of different data,” Koles says. “We can let the [client’s] control room listen to the leak in real time. We can detect machinery that is working above ground [near a pipe]. We can track it and detect its speed. We can detect unique temperature events like a forest fire.”

Hifi can also detect landslides or hillside sloughing and human error such as a backhoe that nicks a pipe. Or even the impact of earthquakes across the continent.

“Recently Alaska had a couple of 7.0 earthquakes,” Koles says. “We were able to plot the energy wave across North America. We could pick up very small levels of tremors as far south as Houston.”

Product Agnostic
While most of its customers are oil companies, Koles says Hifi is product agnostic.

“We’ve done oil, gas, wastewater, slurries for mining companies,” Koles says. “We’ve spoken to European potable water companies. Any product under pressure in a tube represents something we can operate with.”

Hifi’s engineers work to enhance hardware and the algorithms used in software. “The software algorithms we run on data sets in real time,” Koles explains. “We spend a lot of time making smarter algorithms that run on the same data sets.”

Hifi can retrofit its fiberoptic cable on existing pipelines but says its more economical to install when pipelines are being constructed.

A recent project is a 150-kilometer new-build pipeline completed for Husky Energy. “This is one of the longest pipelines in the world with fully distributed sensing (every inch),” Koles says. “The challenge was the sheer size of the pipeline and how much data the sensors generate on a daily basis. Hifi had to fine tune our algorithms and data processing approaches for data management.”

Adopting Innovations
While Hifi has a few competitors, Koles says they are predominantly using first-generation technology. The bigger challenge is getting clients to try Hifi’s technology.

“The pipeline industry is not well known for adopting innovation,” Koles says. “Our biggest competition is the status quo. No one wants to be the first. On the other hand, no one wants to be last. We do have some pretty big names in the industry [as clients]. That’s generates its own momentum.”

In an effort to enlarge its footprint, Hifi plans to look beyond oil and gas. After all, it’s technology “can be leveraged on any long linear asset including bridge decks, intelligent highways and perimeter security,” Koles says. “While we have been very focused on pipelines, we will probably start to explore some other markets and applications in 2019.”