In 1986 the Tamoil Group bought the former Exxon refinery located in the city of Hamburg.

After the acquisition, the refinery was stepwise modernised and between 2000 and 2003 new plants for desulphurisation and dearomatisation were built to meet today’s most stringent quality standards of transportation fuels. 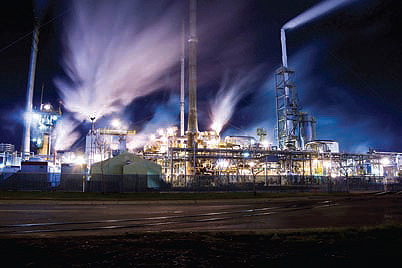 This facility, the ‘Holborn Europa Refinery’, consists of approximately 87 hectares of land, and is located at the south fork of the Elbe River and seaport basin. The refinery is well placed for access by ships arriving from the North Sea, by the inland waterways of the Elbe, by motorway, and by rail, with sidings on-site and an adjoining rail yard. It is a cat-cracking refinery with medium conversion and produces a full range of refined products, such as liquefied petroleum gases, petrol, petrochemical grade cyclohexene, diesel, heating and fuel oils. The off-site areas of the refinery include major facilities such as tank farms, product shipping and receiving facilities, product blending systems and wastewater treatment plants.

He continued: “It was originally built in the 1920s and expanded in 1950 and again in 1972, at that time by Exxon. It was shut down 13 years later, and taken over by Holborn Europa Raffinerie GmbH, a member of the Tamoil Group, in 1986. As a result it restarted the crude processing exactly 25 years ago in January 1988, and in April 1988 we restarted the FCC unit. Since the acquisition, the refinery has progressed with the modernisation of our units, which are essential to long-term productivity. As a result we are fully equipped to produce oil in today’s most stringent fuel qualities, all sulphur-free. Our nameplate processing capacity is 100,000 barrels of crude per day, but we can do at least five per cent more.”

This crude oil is delivered to the refinery via a 147 km long pipeline directly from the ‘Nord West Oelgesellschaft’ deepwater terminal in Wilhelmshaven. The refinery also has a dock, which can normally receive ships of up to 80,000 metric tons carrying crude oil or feed stocks. Other blend stocks, intermediate, and refined products are brought into the refinery on coasters and barges. 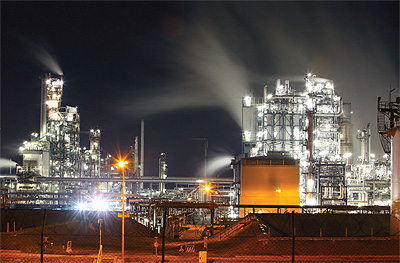 “We are processing whatever type of crude is available, such as Russian, North Sea, North or West African,” said Frank. “We have committed our processing capacity fully to the Holborn European Marketing Company – they are the owner of the crude and the products, and we receive a barrel fee for each barrel we process.”

One of the most significant developments that occurred at the Holborn Europa Raffinerie was the modernisation programme that took place at the beginning of the new millennium. This was undertaken in order to conform to a European Union Clean Air Directive, which came into effect on 1st January 2005. Approximately 200 million euros were invested at the Hamburg oil refinery. The new units have been tied into the course of a scheduled five weeks turnaround and trouble-free commissioned in the course of re-commissioning the refinery after completion of the TA.

“The ‘Clean Fuels Project’ resulted in a deep desulphurisation unit for diesel and distillates, an isomerisation unit, crack naphtha desulphurisation and the steam reforming unit, as well as desulphurisation and modification of the original gas oil hydrotreater,” explained Frank. “This was an old design from the 1970s and is now a unit that can also produce diesel and sulphur, at sulphur-free quality. Today, the Hamburg refinery is not only able to fulfil the European Union specifications but can also produce high quality products for niche markets and cyclohexane for the chemical market. Since we went through the clean fuels project the refinery has been running smoothly and on a stable level.”

Given the refinery’s capabilities in the area of low sulphur fuels, the latest legislation regarding marine fuel may offer it a new prospect for development. “We are investigating if any opportunities will arise out of the more stringent sulphur limitations on marine fuels,” noted Frank. “Today we are selling interesting quantities of one per cent bunker fuel to the European bunker fuels market, and in 2015 the request for 0.1 per cent sulphur arises on the marine gasoline market, which may bring us some attractive options to convert some heavy fuel oil into lighter fuels. Our presence in marine fuels at the moment is quite small, so this area is one we’re watching.” He added: “Perhaps opportunities may also arise for us to co-process some biofuels in the future too.”

He concluded: “We are in a shrinking market so we are not making ambitious expansion plans. Rather, we are concentrating on the execution of smaller efficiency programmes, energy conservation investigations and cost improvement projects, all of which will be ongoing over the next few years.”