Standing as the second most populated country in the world, with nearly a fifth of the world’s population, India has a fast-growing economy, and has become a hub for information technology services, with an expanding middle class.

With an ever-increasing number of citizens demanding more transport fuels, gasoil and gasoline, and cooking gas, the Government has to ensure that it is able to meet the energy needs of the country, especially as figures are indicating that oil demand growth in 2020 is likely to be higher than in 2019 (assuming that economic growth accelerates.)

A particular area of importance, therefore, is making sure that India has enough strategic petroleum reserves to ensure energy security for the country (in addition to the existing storages of crude oil and petroleum products with oil companies). The company tasked with this significant role is Indian Strategic Petroleum Reserves Ltd (ISPRL) a wholly owned subsidiary of the Oil Industry Development Board (OIDB), which functions under the administrative control of the Ministry of Petroleum and Natural Gas.

ISPRL is India’s first line of crucial oil reserve, and is there to serve in response to external supply disruptions. It maintains emergency fuel stores of strategic crude oil in three underground locations in Mangalore, Visakhapatnam and Padur (Udupi, Karnataka). These were chosen thanks to their advantageous positions on the coast, their suitable geology, and the fact that it was easy to supply the crude oil to a cluster of refineries from these locations, either through pipelines or a combination of sea transport and pipeline transfer.

The largest man-made caverns in India, these marvels of engineering were a significant undertaking and while the technology is proven, it is still quite a niche field in the oil industry. Taking up the story to explain why the Indian Government chose underground storage for crude oil is the Chief Executive Officer and Managing Director of ISPRL, HPS Ahuja. “This approach meant that 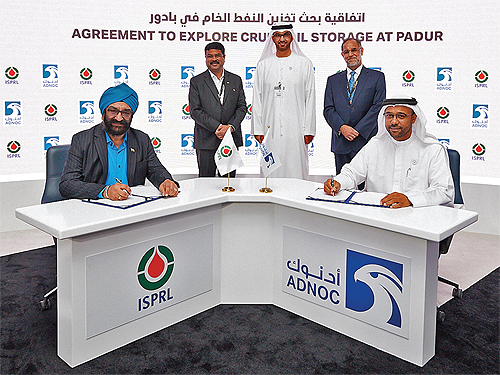 crude oil could be procured in large quantities and be brought in via VLCCs at lower freight costs and stored in these large capacity caverns,” he began. “Transferring crude oil to inland refineries through a pipeline was easier and more cost effective compared to transporting products all the way to the point of consumption.

“Strategic storages can also be utilised in the event of oil blockage or supply disruption, as well as help in price stabilisation, because fuel can be strategic stocked during low demand and used during high demand.”

Shri Ahuja continued with some further benefits of the caverns. “The surface land requirement is low, plus the depth at which they are located means they are fully isolated, and this offers the safest and most environmentally-friendly means of storing hydrocarbons. The principle of containment ensures no leakage or contamination, and external fires will not affect storage. Indeed, safety hazards on account of sabotage, storms, earthquakes and explosions are all minimised, and caverns by their very nature require very low maintenance and hence safety is built-in.”

ISPRL was first established in 2004, and after many years of development and construction, all three locations have now been commissioned – Visakhapatnam (June 2015), Mangalore (October 2016) and Padur (December 2018).

Thanks to its successful approach and dedication to excellence, the high quality operational capabilities of ISPRL have been noticed by the big operators in the oil industry, with the Abu Dhabi National Oil Company (ADNOC) already utilising its storage services, and an MoU with Saudi Aramco, one of the world’s biggest oil producers, signed as recently as October 2019. “The purpose of the MoU is to document the parties’ intention to explore the potential opportunities of ISPRL making one compartment of the crude oil storage facilities in Padur, Karnataka available to Saudi Aramco and its affiliates, for the storage of Saudi Aramco crude oil. It also covers the provision by ISPRL of storage and management services to Saudi Aramco and its affiliates and certain other services relating to the storage facilities in Padur,” explained Shri Ahuja.

“It will be a great achievement for India to convert this MoU into an Agreement. The credit goes to our Hon’ble Prime Minister Mr. Narendra Modi, and our Hon’ble Minister for Petroleum and Natural Gas Mr. Dharmendra Pradhan under whose dynamic leadership and guidance these international agreements were signed.”

Having now completed the first phase of cavern storage development, Shri Ahuja and his team are now looking at Phase-II – The Govt. of India has already given its ‘In Principle’ approval for establishing 6.5 MMT Strategic Petroleum Reserves at two locations Chandikhol (4 MMT) in Odisha and at Padur (2.5 MMT) Karnataka including dedicated SPM’s for the two SPR’s. The ‘In Principle’ approval is to take up the project under a PPP model to reduce the budgetary support of Government of India.

Working on Phase-II to ensure the land acquisitions and other approvals are achieved when needed and the project can be completed in the anticipated time frame, as well as trying to commercialise the compartments of all the three caverns to their maximum potential are all at the top of the agenda for ISPRL in 2020. “Our main role is to enhance the Energy Security objective of the country,” added Shri Ahuja – with him and his team at the helm, the people of India can be assured that in an emergency, their fuel reserves are in very safe and capable hands.