The company’s legacy over the last 30 years has been in the manufacture of control and electrical systems, which remains its cornerstone of through subsidiary IEC Systems with a considerable marketshare. Over the last six years though IDE has also emerged as a leading player in the fabrication of onshore drilling rigs, and the modification and refurbishment of both on- and offshore rig assets. This is in addition to its other business streams of offshore platform rig drilling packages, electrical drive systems, automation and hydraulics.

With the shale gas boom in the US driving demand, during this period IDE has delivered approximately 50 rigs, through a combination of new-build contracts and refurbishment projects. The company has also seen a shift in the industry from a DC Silicon Controlled Rectifiers (SCR) control house-based rig to AC Variable Frequency Drive (VFD) control systems, and is therefore positioning itself accordingly to be one of the leaders in that space.

Taking a wider view of IDE’s marketplace, managing director Tony Beebe describes the fundamental requirements customers are looking for: “Operators are looking for a fast-moving automated land rig, which drills efficiently but keeps personnel out of harm’s way labour-wise. To put it into perspective, in the past land rigs have required a lot of manual labour, including working at heights and assembly, so we’ve worked very hard to remove as much of that as possible from the process.

“In this respect we are working on several projects where we are striving to pare down to a one or two-person rig, so our ongoing goal is to remove people from the hands of the machines. 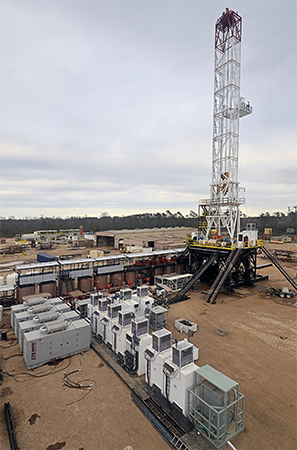 In all aspects of our work we display a strong commitment to the customer and the project in executing it the way they want. This means that as well as detailed aftermarket support, we also undertake a lot of customisation in order to achieve this.”

In terms of fundamental product designs, IDE has three core systems in its portfolio; the Sparta and Self Elevating Drilling System (SEDS) rigs, and the Desert One. The SEDS is a box-on-box substructure with a vertically erecting 152-foot mast, which is extended with the drawworks and minimal crane usage. Building upon this industry proven structural technology, the Sparta Drilling System (SDS) combines a vertically erecting mast with a hydraulic winch raised parallelogram substructure. The flexible modular design of the rig means its is suited to well programmes where drilling time is minimal and fast efficient rig moves are essential.

“We launched the SDS rig in 2009, and following an evolution of the design we are now preparing to release a second generation of the system,” describes Tony. “The changes have primarily been focused on improving the efficiency of moving the rig and to update it for new regulations. We’ve already sold five of this new incarnation, which are now being built for delivery later in the year, and are quoting a number of others as well.”

Prior to 2008 IDE saw a lot of its rigs delivered into shale gas shelves such as Marcellus, as well as internationally, but today the company is supplying more and more into domestic oil shelves such as Bakken and Eagle Ford. As Tony explains, these changing environments have also warranted systems to match: “For example, the geographical location of the Bakken formation is very cold in the winter, so we offer a winterisation package for rigs to make them more suitable for those areas.

“Elsewhere, we have worked with a company in Poland to update one of our rig designs in order to meet the CE electrical package specifications in Europe and the tight emission restrictions. One of the things we have seen with the new shale gas developments is that this is not always out in the wilderness, but in some cases right near cities and other infrastructure. Therefore we need to adapt our systems to be friendly towards these more urban areas in terms of things like narrow tunnels and light-weight rated bridges.”

However, as Tony is keen to highlight, a lot of improvements can be realised simply through fundamental good engineering: “In the past a lot of additional equipment was added to rigs as drilling locations were often remote and it was difficult to procure spare parts. Today, with better infrastructure and the ability to instrument rigs with much lower rates of failure, we can actually remove this redundant equipment and improve the efficiency of the rig. Likewise, as the rig gets lighter and smaller it becomes simpler to operate in terms of fewer pumps, valves, and motors, and in turn gains a greener footprint.

“For example if we update the mud systems and fluid hydraulics on the rig we can remove 15 – 20 per cent of the horsepower required to operate the system just through the use of modern technology, instrumentation, and sensors, and better engineering. This would then equate to an equivalent 15 per cent drop in nitrogen oxide, which is one of the measured emissions gases.”

Whilst IDE’s strategy is clearly to remain a leading force in the land rig market, the company is also sharpening its focus on the offshore platforms rigs, particularly those installed 20 to 30 years ago. “With shale drilling technologies and modern control systems we can extend the reach of these platforms and enhance recovery,” enthuses Tony. “Similarly with older jack-ups we think we can turn brownfield upgrade projects into something more akin to greenfield programmes, at a competitive price whilst enhancing the drilling capacity of those rigs.”