For almost 30 years, the International Spill Control Organisation (ISCO) has been dedicated to improving worldwide preparedness in response to oil and chemical spills.

It also acts as a forum for the promotion of technical development and professional competency, and to provide a focus for making the knowledge and expertise of spill control professionals available to the International Maritime Organisation (IMO), UNEP, EC, and other organisations.

It was back in 1983 that representatives of the US, British, French and Swedish spill control association (SCAA, BOSCA, SYCOPOL and SWEMARPOL respectively) came together at the International Oil Spill Conference (IOPC) in Texas to discuss the formation of ISCO. The organisation was incorporated in London the following year as a not-for-profit international entity with clear objectives, such as the promotion of international co-operation and practical support for implementing Oil Pollution Preparedness, Response and Co-operation (OPRC) and other relevant IMO conventions.

Although the outcomes of this included positive contributions to international co-operation during the Exxon Valdez spill in 1989 and Gulf War pollution in 1991, initially eligibility for joining ISCO was restricted to national associations, of which very few exist. With this seen as incompatible with the objectives of the organisation, in 2005 membership of ISCO was subsequently opened up to all entities, public and private, with a legitimate interest in furthering these aspirations.

As such, today ISCO has members in over 40 countries worldwide, including major response organisations, equipment manufacturers, and individual professionals such as training providers, consultants, and government agencies. In terms of the benefits this membership brings, ISCO’s UK secretary John McMurtrie describes: “One of the main purposes of the organisation is to provide a focus for all of the people involved in the industry. We aim to help organisations, companies, and individuals in the industry to co-operate and work together. 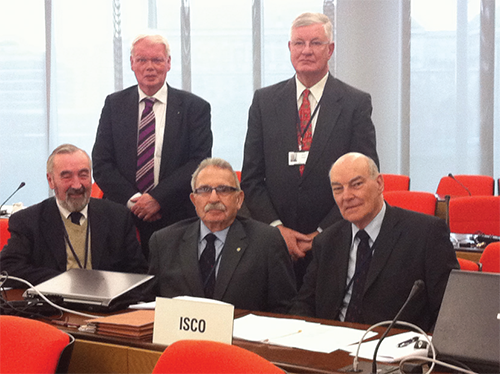 “A key part of ISCO’s remit is to represent the international spill response community at IMO meetings, as well as participating in projects instigated by the IMO, and in particular the IMO technical group. We also have an educational function whereby through our weekly newsletters we aim to keep the community up to speed on new developments, be they legislative, scientific, or otherwise.”

The organisation is continuing to attract new members all the time, which it helps to support regardless of what stage they are at with their spill response programmes. “We are getting a lot of interest from the Far East, Africa, and China, and in particular the developing countries with what we call ‘ response capacity building’, which is essentially putting in place the capability to be able to deal with these incidents if they should occur. At present many operators within these locations are still very much on a learning curve with regards to the implementation of the OPRC convention and HNS protocol, so we are helping to assist them in this work,” adds John.

In 2007 ISCO was granted Consultative Status by the IMO, and is the only such organisation representing the spill response industry. This means that its members now have a voice in the drafting of legislation, rules and guidelines that impact on their interests. The organisation has also become a recognised complementary facility for authorities, oil companies and other entities in the event of a major pollution event for the access of support from the private sector and rapid sourcing of specialised know-how and equipment. A notable example of this capability was during the Deepwater Horizon spill where the support provided by ISCO was personally acknowledged by the National Incident Commander, Admiral Thad Allen.

Co-operative international support, as in the case of Deepwater Horizon, is at the heart of ISCO’s objectives, and as John notes, in the aftermath of this event the organisation is continuing to feed into this: “One project we are currently involved in is a proposal introduced by the delegation of the US to improve the mechanisms for organising international aid response in the event of major oil spills. Quite a number of organisations have joined in the development of this project, based upon the experiences of the Deepwater Horizon spill. In support of this, ISCO has set up a correspondence group to try to bring together input from the private sector on the organisation of mobilising materials and equipment, as well as competent persons that can assist in response activities.”

Perhaps the biggest recent development for ISCO though has been the introduction of its new professional membership classes, which recognise the qualifications and experiences of individuals in the international spill response community. Students, apprentices and trainees can join ISCO as student members, and then as they gain qualifications and experience can become eligible for the higher classes of Associate Membership (AMISCO), Membership (MISCO) and, finally, Fellowship (FISCO).

This is a significant step forward in a profession that traditionally has not required high academic attainment, but rather the intuition, experience and skills that can only be found first hand. The recognition of the ISCO professional membership therefore marks these individuals as experts in their field with a certain level of quality, competence and commitment. With ISCO intent on maintaining the growth of its organisation, it is hoped that this professional recognition will be a key step towards this, and the greater preparedness of the world to deal with these potentially disastrous incidents.