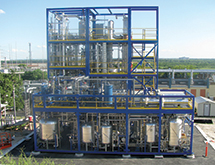 Ivanhoe Energy is eager to address the shortage of oil that is expected to occur in coming years. According to Ivanhoe Energy’s own consultants, as well as research done by the oil and gas industry and some of the majors, many see a significant shortfall in supply by 2030. Even with light oil production and oil produced from fracking, there still will be a shortfall, and Ivanhoe Energy believes heavy oil can make up for that.

“There is a tremendous amount of heavy oil in the world, we just have to monetize it to meet the global crude oil demand,” Chief Technology Officer Michael Silverman says. “Heavy oil is difficult to monetize because it takes a tremendous amount of energy to get it out of the ground; it has a very high viscosity and can’t be moved through pipelines; and the material straight out of the ground has little value because there is so much residual oil in it. However, we are eliminating all three of these major challenges.”

Addressing the Issues
Ivanhoe Energy is eliminating these challenges with its technologically innovative methods. Primary among these is a proprietary, patented heavy-oil upgrading process called Heavy-to-Light (HTL). HTL can be located in the heavy oil field and completely integrated with a company’s upstream field operations.

The process converts heavy oil to a lighter, more valuable product that can be transported via pipeline without using light-blend oils. Additionally, the coke and gas byproducts from the upgrading process are converted to steam or power, available to the operator to develop the field.

“The operator can address the energy-intensive process with the natural byproducts of HTL,” Silverman says. “You can use HTL in the field, and all of the energy needed to get the heavy oil out of the ground is supplied by the HTL process, which makes it good for remote areas.”

“HTL also addresses the viscosity issue,” he continues. “Heavy oil comes out as a solid, and traditionally you would have to use a large amount of diluent to get the oil into a pipeline. You have to use about 50 percent diluent, which is extremely expensive and takes up a lot of the pipeline space. Additionally, heavy oil is traditionally low value because of all the resid, but the HTL process creates a synthetic crude oil that is much higher in value and equivalent to crudes such as Brent oil. In fact, the value is so close to Brent that it trades on par with Brent.”

Paradigm Shift
Ivanhoe Energy has operations in Canada, Ecuador and Mongolia and business development activities worldwide. In addition to commercializing HTL through outside partnerships, Ivanhoe plans to implement its HTL process on its own projects.

Silverman notes that the HTL process can be integrated in the field or in a midstream capacity, and can be economically applied in scales as low as 10,000 to 20,000 barrels per day.

“This allows companies to shift the process intensity to the field,” he says. “When used in a midstream capacity, you can put the HTL plant in a centralized location and gather oil from multiple field operations. The heavy oil is shipped a short distance and then the synthetic crude oil is sent to refineries. HTL generates netbacks that are approximately 67 percent greater than with the traditional approaches to developing heavy oil. When this partial upgrading process is embraced it will generate high rates of return and we will begin to shift the paradigm.”