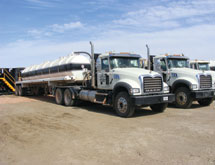 “We treat our customers and employees with integrity,” he says.

Aware of the Trends
With offices in Oklahoma and North Dakota, Jericho’s operations differ in each market it serves. In North Dakota, its primary services are water hauling and renting of frac tanks. The company also provides water hauling and frac tanks in Oklahoma, but soil farming and spreading mud and soil from trucks are the company’s primary services in that region.

“Soil farming is not allowed in North Dakota because they don’t yet have the rules and regulations in place to oversee that,” Keeton says. “But as the North Dakota market evolves, those services will probably come into play there, too, because economics suggest that soil farming will come to pass in North Dakota.”

The company stays on top of customer expectations to be sure they are providing the right quality of service. Jericho’s people talk to customers daily to develop relationships with them that go beyond simple customer/vendor relationships.

“We don’t think of ourselves as just vendors; we are in partnerships with customers,” Keeton says. “We establish mutually beneficial arrangements.”

As the oil fields evolve, Jericho tries to be proactive and look at what will be going on a year out. Preparing for changes is critical, because customer needs evolve as the oilfields move from drilling commencement to the start of production.

“For example, vendors were in greater demand three years ago in North Dakota,” Keeton says. “It has gone beyond the saturation point and prices for services has declined. Now, prices are stabilizing.”

In an environment where prices have been volatile, Jericho maintained a commitment to a fair pricing model. The company is only concerned with reaching the profit level that it deems necessary. It didn’t arbitrarily raise prices as it claims some competitors did.

“For us, this isn’t a short-term venture,” Keeton says. “We plan to be in business for a long time and develop relationships through good services and fair prices.”

Positive Outlook
Jericho is optimistic about its future and has made investments in equipment and people. Retention in North Dakota is an issue because qualified people are in demand. Jericho provides housing for employees instead of man camps and works people on rotations to provide time off.

Another aspect that has Jericho in a favorable position is its strategically located operations. The company has avoided the crowded Williston, N.D., market in favor of Dickinson and Wafford City. Keeton believes that slice of western North Dakota will remain fertile ground for Jericho Services as the oil boom continues.

For the short term, Keeton is happy with Jericho’s current size and doesn’t anticipate a major amount of expansion in the next 12 months. Instead, he foresees minimal expansion while the company focuses on debt reduction over the next year. The plan is to avoid becoming highly leveraged while seeking to become debt free.

“We want to have a debt-to-asset ratio that will be relatively low, somewhere under 15 percent,” Keeton says. “If you are too highly leveraged and there is a dip in the market, it puts you on a slippery slope.”

Ultimately, Keeton believes the assistance his company provides to the oil industry is critical to our country. North Dakota has seen many changes as the oil boom has expanded, and Keeton thinks the market will remain strong for many years.

“The activity in this play will be good for us, our children and our grandchildren,” Keeton says. EMI