It also works in the defence sector, where its main customer is the French military, and has operations in the marine renewable sector, where clients are very diverse.

As Denis Drouin, sales director explained, although the company is less than ten years old, it has already seen a lot of success: “Jifmar Offshore Services is a France based business, which was established in 2005. We started from scratch and now the company employs about 80 people with an 18 million euro turnover in 2013.”

He continued with more details on how the company works: “We operate six vessels and six ROVs, which we own, so our sailors are our employees. As a marine contractor our job is to design, work out a solution on behalf of our customers and then we are committed to carrying out the works ourselves.” Although Jifmar is committed to undertaking its contracts directly, periodically it finds it has more contracts than vessels and ROVs, and to address this it will charter vessels and ROVs in order to make sure the work is completed successfully. 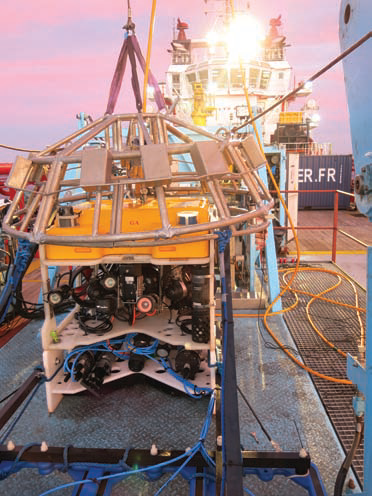 These contracts are undertaken in four different business areas, as Denis highlighted: “We work for the defence sector, the oil and gas industry, the marine renewable industry and we also carry out special works such as salvage, UXO survey, barging, consultancy services etc. We recover objects that have been left on the seabed for instance, such as anchors.”

He added: “We tend to carry out operations in areas where it can be difficult to work, so for example we operate vessels and ROVs where currents or the swell is very strong, or in shallow water where navigation is difficult. Also we can also work in deep water of up to 2000 metres.”

He added: “We are also IMCA certified, and this is absolutely necessary to secure contracts. It is one of the standards of communication that customers are expecting us to have. It is a very necessary compliance that clients are asking for.”

The oil and gas industry is where Jifmar has seen the most demand over 2013 and in this area its main customers are BP, Total and Perenco. “We have long-term contracts with them, and I believe they use our services because we are so flexible. We are able to answer our clients’ requests very quickly and we are also very experienced in complex projects where the competition is less intense,” said Denis.

The contracts that Jifmar won in 2013 were not only in Africa and Europe but also in South America and the Mediterranean area as a whole. The company is also looking for opportunities in South East Asia and South America, where offices may be opened if contracts are secured in both: “Every time we secure a long-term contract we open another office in the country or at the location where the operations are,” Denis confirmed.

“One reason for an increase in our turnover is the fact we have been able to open a new office in North West France and elsewhere abroad (Ivory Coast, Mayotte – near Comoro Islands, Congo and UK) designed to get closer to customers and the oil and gas market. Alongside these new sites we also invested four million euros in a new ROV and multi-purpose vessel, called a Multicat or multi-purpose vessel.”

He continued: “We also invested in employees, so we hired two or three new engineers and of course more sailors. Our turnover increased by 50 per cent from 2012- 2013, which we are very pleased with.”

Denis attributes the success of 2013 to the fact that the company is becoming more and more well known in the main sectors of the market. “We have received an increasing amount of enquiries and as our commercial side has increased we have been able to secure more contracts,” he said.

As the New Year begins, Jifmar is keen to maintain the growth of 2013 and expand further into new areas in the future. Denis concluded: “We definitely want to keep growing in the areas of oil and gas and the marine renewable sector, and those are the two main areas where I see us undertaking more activities.

“In the longer term, I would like us to get a foothold in the heavy cargo marine transportation sector, where would we like to offer a service to our customers that would mean we could transport heavy cargos of up to 1000 tonnes by barge in coastal waters. We have been in discussions about this at Jifmar and we wouldlike to expand the activity over the next two to three years, but without losing our momentum in the oil and gas sector.”