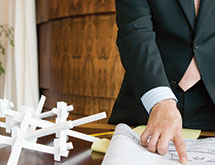 It is not surprising to hear that North Dakota’s population and economy have exploded. Oil production has brought job opportunities and money to the Bakken/Three Forks area. At the same time, the rapid growth has brought an increased need for housing, and cost of living has climbed dramatically. In order to predict the state’s future needs as growth continues, North Dakota Legislative Management hired KLJ to conduct a year-long oil and gas industry study.

KLJ is a regional engineering, surveying and planning firm with 23 office locations spread across six states. The company has strong roots in North Dakota and throughout the Upper Great Plains and has been working to assist the region with infrastructure needs. In 2013, KLJ began the impact study, which would help predict oil and gas production in the Bakken/Three Forks area and any trends that may impact the region over the next five years.

KLJ collaborated with North Dakota State University’s (NDSU) Agribusiness and Applied Economics Department and the Energy and Environmental Research Center at the University of North Dakota (UND). Local government and industry experts also contributed to the study. This collaborative team created a thorough study of the 19 oil-and-gas-producing counties located in the Bakken/Three Forks region, and the study was presented to North Dakota Legislature this fall. Information and predictions from the study will assist North Dakota Legislative Management when it makes decisions about the future of the state.

To determine relevant trends, three areas of impact were considered: an economic analysis of the Bakken/Three Forks formations; projections of population, employment and housing needs; and the potential for CO2 enhanced oil recovery.

The economic analysis determined that drilling in North Dakota will maintain a sustained growth over the next five years as oil prices remain between $70 and $100 per barrel. An adequate supply of oil-producing units remain, so drilling will continue to be concentrated in the Three Forks Bench Drilling boundary. Over the next several years, production could reach two million barrels a day. The study also concluded that if oil prices drop, areas of active drilling will concentrate on wells with high productivity.

Population Demands
The second area of impact KLJ considered was trends of population, employment and housing in the Bakken region. With the help of NDSU, KLJ determined that the Bakken population will continue to increase as numerous oil and gas employment opportunities become available. Continued employment growth in Williston, Dickinson and Minot will cause areas around the cities to see the greatest growth in population. However, research also revealed that each county in the Bakken area has the potential for a population increase. Some may see a 30 percent increase in population over the next five years, and the increase in population will continue to make a significant impact on communities. Demands for medical assistance, law enforcement, schools and other services will remain high until the population stabilizes. Community resources also will be strained throughout the study period until funding is available to establish long-term financing of infrastructure and public services.

Lastly, KLJ and UND established CO2 Enhanced Oil Recovery (EOR) predictions for the Bakken/Three Forks area. CO2 EOR was included because it has the potential to increase oil production. Eighty-six oilfields in the area could recover between 280 and 631 million barrels with this type of recovery. The CO2 EOR method means that Bakken/Three Forks oilfields have an oil production viable well into the future.

The completion of the year-long study reveals that North Dakota oil production will continue to increase over the next five years. Oil is here to stay, and the population, employment and housing needs of the region will grow into 2019. North Dakota Legislative Management will be able to use the findings in KLJ’s study to make decisions about necessary infrastructure and societal changes.