Since it was last featured in European Oil and Gas Magazine during December 2012, Leni Gas and Oil Plc (LGO) has continued to consolidate its niche strategy of delivering growth through the acquisition of proven reserves and enhancement of production.

During the course of the past year the company has made impressive strides in its Trinidad holdings and it continues to search the market for new opportunities.

Having acquired the Goudron oilfield in Trinidad during October 2012, LGO wasted no time in beginning the process of asset enhancement to ensure increased production followed as quickly as possible. Commenting on the company’s progress in the Goudron field CEO Neil Ritson says: “Recently we celebrated the first anniversary of operations with a visit from the Minister of Energy (Kevin Ramnarine) and the President of the state oil company, Petrotrin (Khalid Hassanali). His Excellency Arthur Snell the British High Commissioner also attended and we were able to show them the huge advances we had made in the last year. During this time we have reactivated about 60 existing wells and improved the infrastructure with new sales facilities. In the first year we produced about 60,000 barrels and we are now producing close to ten-times as much as we were a year ago.”

LGO’s operation of the Goudron field has proven to be highly effective with a year of operations completed with 70,000 accident free man-hours being undertaken. Goudron produces an average 38-degree API light sweet crude oil, which is piped via the Petrotrin oil export pipeline, directly to the Pointe-a-Pierre refinery in western Trinidad. The success of this project has generated a lot of interest in the company’s capabilities and it is currently working towards its mid-term target production of 2000 barrels of oil per day (bopd).

Its 50 per cent share in the Icacos field further expands the company’s operations in Trinidad. The Icacos field is relatively small compared to the Goudron operation, but reflects part of the company’s wider interest in the Cedros Peninsula where it holds private petroleum leases and has a collaboration agreement with Beach Oilfield Limited. It is intended that the collaboration will explore the southwestern peninsula where the companies share joint operations; this represents part of a wider strategy of targeting the underexplored East Venezuelan Basin where it extends into Trinidad.

Overall, Trinidad’s southern onshore oilfields are a perfect match for LGO’s strategy of acquiring and redeveloping fields with underexploited reserves. It continuously looks for new opportunities in the region and is currently collaborating with Maxim Resources over a possible future joint operation in the productive South Erin block. In conjunction with the potential benefits of working with partners like Maxim and Beach Oilfield Ltd, LGO is confident that it will increase production in its current holdings through the use of new technology, improved facilities and infill wells. Furthermore, additional opportunities exist to acquire further assets and the company is keen to exploit untapped exploration potential in each of its fields. 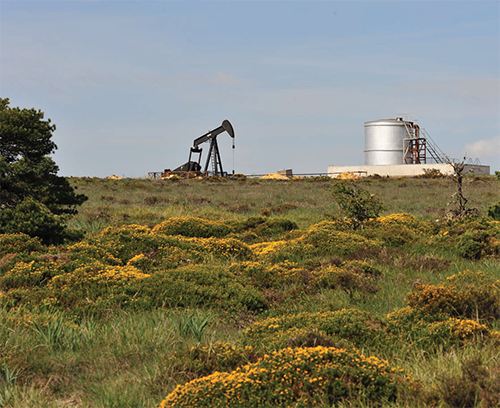 Spain also remains an important asset for LGO, with production continuing in the Ayoluengo Oilfield and trial production operations taking place in the adjacent exploration acreage. The company acquired the Ayoluengo field in October 2007 and currently produces low sulphur 37 degree API crude at the site. The field is the largest onshore oilfield in Spain and significant work has been undertaken to remove oil contamination that has accumulated on some well sites during its long history. Like its Trinidad operations, LOG’s Spanish holdings have generated a high level of interest from potential partners, as Neil states: “We continue to produce a regular amount of high margin oil from Spain and are in the process of carrying out some low cost interventions to a number of key wells in order to restore their production to 2012 levels. There is continuing interest from various people to partner and even buy the Spanish assets from us and there is a programme in place to increase production through at least five sidetracks when a partner can be located.” Neil continues: “In the meantime we are continuing to work on reducing the arsenic impurities in the oil so that we can send it to the BP Espana Castellan refinery where we will receive a better price for the oil.”

The last year has also seen LGO divest non-core holdings in projects that didn’t fit its niche strategy of onshore oil field reactivation and today its assets lie solely in Trinidad and Spain. Neil comments: “Being more focused makes us more efficient and we are able to operate with close to a hundred per cent local staff. For example, everyone working for LGO in Trinidad is a Trinidadian national, which is cost effective and also sits comfortably with the corporate stance on localisation.”

All of the company’s operations are also underpinned by a philosophy of professionalism and social responsibility. Environmental protection is a cornerstone of this vision, with the Goudron field situated on the edge of the critically important wildlife sanctuary of the Trinity Hills and Ayoluengo located within a Spanish national park. As one of only a few international junior oil companies with a proven track record in the niche market of field reactivation, LGO has gained a leading edge when it comes to acquiring new projects and operating them effectively. Recently it reached a key milestone of 500 bopd, providing an important revenue stream to stimulate future growth. “The capital markets are still hugely unsupportive of junior oil and gas companies,” explains Neil. “However, we at LGO are now in the enviable position of relying only on our own cash generation and the commercial debt markets to continue our growth. This is a very positive feature of LGO as we go into 2014.”

Moving forward the company is poised to dramatically increase its production over the coming years. Trinidad remains dead centre in its approach with the first new wells to be drilled in the Goudron in over 30 years planned to commence in late 2013 following the receipt of regulatory approvals, which are expected in the near future. Over the next 18 months LGO hopes to embark on drilling between 20 and 30 wells, each with an anticipated initial production rate of at least 60 bopd. Concluding with the company’s vision for Trinidad Neil says: “We are looking to get to 5000 bopd net production in Trinidad over the next five years and thereby secure five per cent of the local oil market. That is enough of a challenge for now. Beyond that we may look elsewhere, but Trinidad offers plenty of near-term opportunity with its long history of oil operations and a supportive stance from its government.”