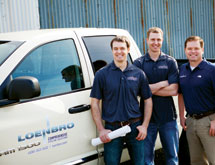 The Williston Basin and Bakken Shale represent some of the biggest opportunities for the oil and gas industry at the moment. Making the most of those opportunities means not only excelling in one area of the business but also maximizing the number of areas a company serves. Great Falls, Mont.-based Loenbro is a prime example of this, explains Sales Director Ed Walker.Founded by brothers Paul and Jon Leach in 1998, Loenbro began as a small team of welders taking on projects for leaders in the refinery sector. Over time, the company evolved into a general contractor that provides pipeline construction and other services including welding, inspection, manufacturing and consulting. “We offer our clients turnkey solutions whether we’re working on a refinery or out in the field constructing midstream gathering lines,” Walker says.

Diversifying and Expanding
As one might expect from a company formed by two brothers, there is a tight-knit feeling within Loenbro that forms the backbone of its operations. The friends and former classmates who joined the company in its early years remain with the company today, working together to ensure long-term success.

Not only has this resulted in a much lower turnover rate compared to industry standards, it also provides Loenbro with one of its greatest attributes: its diversity.

Walker explains that as the company began to grow, clients asked it to take on related projects ranging from industrial plumbing to cement work. Rather than hire subcontractors, Loenbro’s employees learned to do the work themselves, becoming experts in HDPE fusion, phased array inspection, manufacturing and pipeline construction.

“We are a flat organization, and employees pitch in wherever they’re needed,” Walker says. “From the beginning, Paul and Jon have instilled their belief in never saying ‘that’s not my job.’ If something needs to be done, our people get in there and do it.”

The company has found that bringing as many capabilities in-house as possible and being willing to expand into new areas has been a sound business strategy. There are few in the Bakken Shale capable of performing certain projects, such as boring or trenching. Bringing the work in-house reduces Loenbro’s need to locate qualified subcontractors and ensures projects can move forward without delay.

Walker says Loenbro’s status as a local contractor based in the Williston Basin gives it another distinct advantage over other contractors. Being local means Loenbro has immediate access to Williston Basin activity, understands the unique challenges of working in the region and has the expertise of local employees to draw upon.

The Right Partners
Loenbro has relied on the help of some important partners during its rise to the top of the industry. For instance, the company began working with Montana-based Kinetic Marketing Group to help it make the move from its welding roots into the pipeline construction market. Kinetic CEO Dana Pulis says her company helped Loenbro through this transition by focusing on what it wanted to achieve.

“Loenbro was a company on the verge of entering new territories,” Pulis says. “They were poised to be experts and innovators in their industry. Our role was helping them evaluate the direction they wanted to take the company and find the best way to tell their story to prospective clients in and around the Williston Basin.”

With the help of Kinetic. Loenbro built the foundational pieces of its identity, starting with refining its name from the original “Lo-N-Bro” to its current form. Pulis says Kinetic helped the rebranded Loenbro develop promotional materials including brochures and a new website.

Throughout the process, Pulis says, Kinetic worked to bring out the key aspects of Loenbro’s foundation, such as the company’s status as a provider of comprehensive pipeline solutions and the expertise of its leadership.

“This company is kind of an anomaly in that these two leaders of this company have learned how to grow and how to take risks, but they still have maintained their idea of who they are and their culture,” she says.

Pulis adds that Kinetic helps customers by providing them with an outside perspective.

“Kinetic comes in and we help define that and we help bring it to physical reality,” she says.

New Technologies
According to Walker, Loenbro has plenty of reasons to be excited about its future in the Williston Basin. Not only does the level of activity look to remain high in the coming years, but Loenbro is making use of new technologies such as fast fusion for HDPE gathering lines as well as an ultrasound-based inspection platform that is safer, more cost-effective, and far more portable than traditional X-ray inspection equipment.

Phased array uses a series of ultrasonic transducers that beam sound waves through material. It provides a safe alternative to X-ray to inspect welds, take thickness measurements and detect flaws or corrosion in metals. Results are sent instantly to the technician who can provide specific repair requirements to the welder to be completed in real-time.

“With phased array, we don’t have to clear sites to do inspection, the way that you have to with X-rays,” Walker says. “That’s a huge benefit to our clients in terms of reduced downtime.”

Making Progress
There’s no doubt that the Williston Basin and the Bakken Shale are the places to be right now in the oil and gas industry, but that heightened level of activity brings a lot of challenges along with the opportunities.

Fortunately, Loenbro is prepared to meet those challenges through careful planning. Walker notes the company strategically evaluates each project and opportunity to ensure that it has the equipment, resources and timeframe needed complete it in conformity with the high level of quality and service it is known for.

“Our business philosophy is focused on meeting the needs of our customers now and in the future,” he says.

“We won’t bid on a project unless we know we can do it in a way that will meet our standards and exceed their expectations,” Walker adds.

This philosophy, combined with the diversity of services under one roof, has led Loenbro to work with some of the biggest project developers in the Williston Basin and made it a sought-after partner for many seeking to take advantage of the opportunities in the Bakken Shale. With these pieces in place, Walker notes, the next few years should be a time of great success for Loenbro.