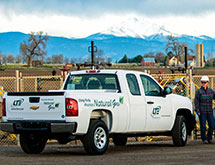 Even before it was named a fi–nalist in two categories for this year’s Oil & Gas Awards, LT Environmental (LTE) was a company on the rise. Since 1992, LTE has provided environmental engineering and remediation consulting services to a strong portfolio of energy clients in the Rocky Mountains, but now that the company is in the running for Consultancy of the Year and the Environmental Stewardship award in the region, Executive Vice President John Peterson says LTE expects the word to spread to an even greater segment of the industry. “It shows that we’re more of a partner with them than a service company,” Peterson says.

Of course, for the company to be nominated for those two awards in the first place, LTE had to have a strong reputation in the oil and gas sector already. Since President Thomas Murphy and a partner established the company, LTE has grown to have offices in Colorado, Utah, Wyoming, North Dakota, Idaho and Florida. Murphy says the company’s work in the energy sector includes remediation, site assessments, SPCC and air quality compliance, gas leak detection, waste disposal and stormwater services. Along with the work LTE does for the oil and gas industry, the company also services clients in the industrial manufacturing, real estate and transportation sectors.

In everything the company does, Murphy says, LTE holds true to the principles and values that have served it throughout its history. Additionally, he says the company occupies a niche in the environmental and remediation industry that makes it ideally suited for serving customers effectively and efficiently. The added exposure created by its nomination at the Oil & Gas Awards is welcome, but LTE has its reputation already strongly in place. “We strive to be the best at what we do,” Murphy says.

Lot to Offer
As a mid-sized company operating in the environmental and remediation sector among both larger and smaller competitors, LTE brings customers the best of both worlds, according to Murphy. “We’re a company of about 125 employees in the Rockies, and we’re a good-sized company,” he says. “We feel like we’re in a sweet spot that we can provide a full-service product to many areas of oil and gas and do it in an efficient and cost-effective way.”

In the current oil and gas sector, LTE expects consolidation to increase. Peterson explains that “our 20-plus years of experience in risk management of oil and gas assets is invaluable in helping our clients identify and quantify environmental risks so mergers, acquisitions, and divestitures can occur in a manner that brings added value to clients’ shareholders. Whether it is our trademarked TerraCert® remediation program, effective due diligence processes, or innovative compliance solutions, LTE offers a diverse skill set that supports our clients’ overall risk management programs.”

Still Strong
Even though oil prices are having a major impact on the marketplace, Murphy is quick to note that LTE is well-versed in the cyclical nature of the business, and that knowledge puts it in good position to pick up new business once the market returns to form. “We are in it for the long haul, we understand the situation and we have been through this before,” Murphy says. “Each time this has occurred, we have come out stronger and with a larger market share.”

The company’s recognition by the Oil & Gas Awards will be a significant part of that in 2015. Murphy says the Consultancy of the Year nomination shows that LTE supports its customers with good information that saves them money, while the Environmental Stewardship nomination demonstrates both the commitment of its clients and LTE to the environment. Murphy says the company has its own sustainability director, and recently converted 19 of its vehicles to compressed natural gas.

Overall, Murphy says, LTE is optimistic about the future despite the difficulties caused by the drop in oil prices. No matter what condition the industry is in, LTE expects to be there for its clients. “We see the oil and gas industry as being strong,” Murphy says.