Discovered in 2008 by Maersk Oil and its co-venturers, JX Nippon and BP, the Culzean gas condensate field is one of the most significant of its kind and is estimated to hold up to 250m-300m boe. Development of the field was approved by the UK Oil and Gas Authority in August 2015 with first gas set to be drawn in 2019 and peak production of an estimated 60,000 to 90,000 boepd reached in 2020. Production will run for at least 13 years and, in line with the UK’s commitment to bringing increased gas-fired electricity generation capacity online, is expected to contribute five per cent of the UK’s total demand. “It’s UK gas to the UK market,” notes Martin Urquhart, Culzean’s Project Director at Maersk Oil.

Indeed, the UK doesn’t even have to wait until 2019 before it starts seeing some of the benefits. The project represents a total investment value of $4.5 billion, and over the lifetime of the 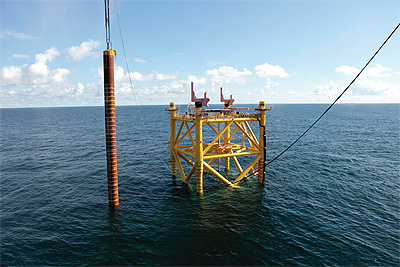 development an anticipated $3.3 billion in operating expenditure will be spent directly in the UK domestic market. Moreover, in addition to the 400 jobs that will be created directly, the development and ongoing operation of the Culzean Gas Field is set to support around 6000 jobs across the UK.

Located 260km east of the coast of Aberdeen in the UK North Sea, the field is made up of two deep reservoirs at a depth of 15,000 feet. Sitting beneath traditional reservoir depth and a large chalk package, the hydrocarbons are present in some extremely harsh conditions. With temperatures of 175 degrees Celsius and pressures of 13,500 PSI, this ultra high pressure, high temperature (HPHT) environment poses a number of complex challenges.

First of these is the amount of time that will be needed to complete drilling works. “Because we’re operating in a HPHT environment, we’re required to start drilling years before the platform is installed,” explains Stuart McAuley, Engineering Manager for the project. “It will take around nine months to drill one well and we need three wells to meet the required capacity, so we need to start drilling approximately two years before the topside is installed.”

The second significant challenge is ensuring the processes and materials are suitable for reliable operation in such conditions. Andrew Lough, Wells Project Manager explains: “The complexities of the drilling programme are driven by the challenges of the pressures and the temperatures. That’s what makes this type of field unique in its development. It’s not just a challenge for Maersk Oil, but also the entire industry in order to be able to deal with the conditions throughout both drilling and production operations.

“Because of the dimensions of the well, for instance, we’re limited in the well thickness that we can use to gain strength,” he continues. “The problem with high strength steel is that it doesn’t like the sour service nature, so we’re asking the industry to supply steels that are very strong. In this respect we are being supported by some very bespoke steel making capabilities in Japan which is dedicated to making high-end oil field tubulars.”

The depth of the wells also poses a challenge requiring a vertical jacket that has to be installed in a number of campaigns. The wellhead jacket has recently been installed. This section demonstrates an unusual twisted base in order to allow the rig to come in as close as possible. In 2017, two further jackets will follow allowing drilling operations to commence, and a year later the top side, including processing facilities, wellhead platform, CPF (central processing facility) and ULQ (utility and living quarters) will all be installed. “By splitting the jackets from the topside we have de-risked the top side’s installation by getting the jackets out of the way and in the water as the piling activities can take several months,” notes Martin. 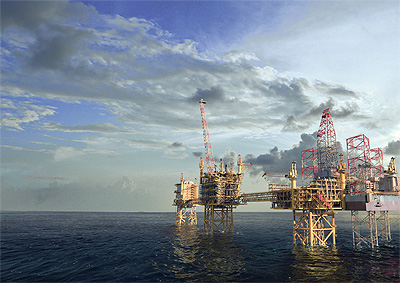 Across all of its operations Maersk Oil places safety as its top priority to ensure that all activities are incident free. Nowhere is this more evident with the Culzean project than above water, where a unique platform design puts all possible safety-critical distances between its personnel and the production facilities. “Personnel safety is key and is the most important factor in how we lay the platform out,” outlines Stuart. “The wellhead platform is separated from the main CPF by a 150 metre bridge, which itself is separated from the ULQ by another 100 metre bridge, so we have maximum separation between the high pressure wellhead and the accommodation.”

At the time of writing (May 2016) numerous significant milestones have recently been passed. Chief amongst these is the successful installation of the wellhead jacket, which left the shores of the Netherlands on 13 April 2016. The EPC contract for the wellhead jacket, access deck and access ways, was awarded to Heerema Fabrication Group in 2014, with the jacket being constructed at the firm’s Vlissingen site in Holland. The twisted jacket has a height of 114 metres, a footprint of 31×31 metres at the bottom and 22×22 metres at the top, and complete with the access deck and access ways weighs in at 7100 tonnes. “We were pleased to see the first of three jackets leave on schedule,” notes Koos-Jan van Brouwershaven, CEO of HFG. “This first one was challenging because of its complicated shape. Maersk Oil has pushed us as a company to deliver the highest possible quality and we are very proud to have achieved this.”

In addition to this, on 7 April 2016, the steel-cutting ceremony for the first of the three topside modules took place at the Sembcorp Marine Offshore Platforms (SMOP) shipyard in Singapore. SMOP was awarded the contract for all three topside modules and the two interconnecting bridges worth over $1 billion in September 2015. The topside modules will also include digital monitoring technology, which as Martin explains, will be key to improving the operational performance of the platform: “We will be harnessing technology to develop a 21st century facility with the ability to remotely monitor critical equipment 24 hours a day, and enable offshore colleagues to access real time data and immediate technical evaluation and onshore support. The technology will minimise time spent on plant and enhance safety and efficiency. Maersk Oil estimates this digital toolkit can save more than $10m annually.”

It’s a significant project in both its size and complexity, but also in the impact it can have on the UK economy as demand for gas and cleaner electricity rises. Maersk Oil, together with BP and JX Nippon, is demonstrating a key commitment to delivering this in as safe and efficient way as possible.

Maersk Oil – Culzean Gas Field
Services: The largest field discovered in the UK North Sea for more than a decade