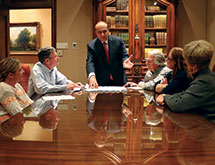 Midland Energy Inc. and Petroplex Energy Inc. take a long-term view when it comes to oil and gas exploration. “We drill and complete every well to last the life of the well bore,” says Jim McCright, operations manager of the Midland, Texas-based companies. “We spend more money extending the life of our wells than many independent producers do, and do not sell our wells.”

The companies’ dedication to completing their wells reflects the personal philosophies of their founder, S. Javaid Anwar. Anwar, a native of Pakistan, founded Midland Energy in 1984 after working as a consultant and then as a petroleum engineer for various oil and gas producers in the Permian Basin. The company proved to be successful enough that Anwar founded a second company, Petroplex Energy, in 1985. “Many other independent oil and gas producers’ business model is to try and develop leasehold acreage in as economical a manner as possible to maximize their profit when they sell it after developing it for three to five years, which causes them to make operational decisions that are not always prudent to produce the well to its maximum economical life, Vice President Rick Davis says. “The Anwar family has no intention of selling anything they drill and operate.”

Anwar moved to the United States in the -1970s. He earned a degree in petroleum engineering from the University of Wyoming. “I was always interested in pursuing a career in energy,” Anwar says. “Initially my interest was in nuclear-generated power, but I changed to petroleum-generated power because I thought it had more opportunities to make a difference in solving our energy needs in this country and around the world.”

Anwar has remained resolutely independent since forming both companies. “He’s bought, developed, and held oil and gas assets without incurring debt or taking venture capital,” Davis notes. “Since we don’t have to meet any particular cash flow requirement established by a bank or a rate of return established by a venture capital backer, we’re not compelled to do things that don’t make sense in the long term and don’t spend money on things that require extra expense to increase initial production but won’t increase long-term production or reserves.”

Anwar’s business philosophy is to “always live within your means so that you can enjoy the success when prices are up and you can weather the storm and not jeopardize your assets when prices go down,” he adds.

Strong Operations
Midland Energy and Petroplex Energy today are active in the Wolfberry play in the west Texas portion of the Permian Basin. The Wolfberry play refers to both the Wolfcamp interbedded shale and sandstone formation and the Spraberry shale, mudstone and limestone formations. Both companies use fracking technologies to enhance the ultimate recovery of their wells. “The Spraberry has been commercially productive for decades, but before the development of fracking the Wolfcamp shale formation was thought to be non-economical,” Davis says.

The companies collectively operate roughly 170 vertical Wolfberry wells producing an average of 1,800 BOE per day. Midland Energy’s holdings generally include many of the older leases acquired by Anwar in the 1980s and 1990s, while Petroplex Energy’s holdings are generally leases acquired after 2000. Both companies share an executive staff and employees. In addition to its leased holdings, the company also has a non-operating working interest in more than 200 wells, Davis notes.

The casing design of each well includes three strings of pipe – surface casing, intermediate casing, and production casing. “We tend to set our intermediate casing deeper than our competitors and double-cement them into place, while others may only do that once,” Davis says. Midland works with a number of experienced vendors and partners, including Bond-Coat Inc., to complete its projects.

Midland and Petroplex continue to drill new wells on its lease holdings, with three vertical wells anticipated in the first quarter of 2015. The companies also anticipate drilling their first horizontal wells this year. “We will continue to be active in the Wolfberry play in the Texas Permian Basin, while monitoring oil prices and service costs, and we will begin to develop leasehold positions with horizontal wells while continuing to drill vertically,” Davis says.

As for the future, Anwar believes that the long-term future of the petroleum energy is bright. “Our global economy will continue to need petroleum energy for the foreseeable future and I feel it is our responsibility to manage our oil and gas assets to ensure that we will have a steady and profitable source of hydrocarbons to fuel the growth and economic progress of this country and others,” he says.