For 175 years a port has operated out of Montrose, nestled in a sheltered haven on the river Esk, just a mile from the open sea.

Located between the key hubs of Aberdeen and Dundee on the east coast of Scotland, the port of Montrose offers a cost-effective alternative for vessels in the region.

In more recent years the port has undergone substantial development, particularly off the back of the activity in the North Sea oil and gas sector. As such, the port of Montrose has served this industry since the 1970s as one of the first to develop a specialist oil support base to cater of these needs. With 1000 metres of quayside, and extensive warehousing, stevedoring, storage, and workshop capabilities, the port is also equipped to deal with a broad range of commercial cargo.

As the party responsible for overseeing these operations, Montrose Port Authority has continued to invest in the future of the port. In particular, this includes the unveiling of its deepwater berths, which enables the port to accommodate larger vessels than ever before, at an investment of £8.5 million. “Located on the South Quay, the deep water berths opened in August 2011 to replace berths which had collapsed back in 2003. Since opening the berths, the gross tonnage of shipping using Montrose has increased by 70 per cent, which is a 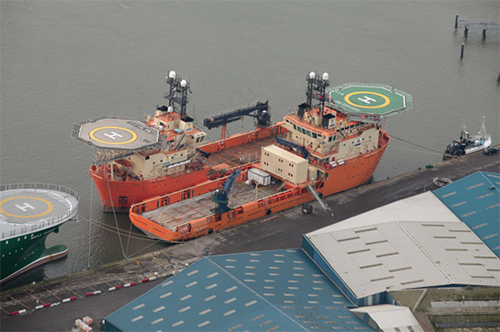 remarkable success. This is principally due to high levels of North Sea oil and gas activity, which has increased demands on Scottish ports operating in that sector,” describes John Paterson, chief executive at Montrose Port Authority.

The Authority succeeded in attracting significant Freight Facilities Grant funding through the Scottish Government for this development, as well as loan funding through Royal Bank of Scotland. The planning, design, and construction of the berths spanned over two and a half years, and included the significant challenge of removing the remains of the previous structures from the seabed. “This was taxing for the contractors and consulting engineers, but it is to their credit that the project was successfully completed on time and budget,” enthuses John.

The level of activity that has been sparked by the new berths clearly demonstrates that these services are appreciated by the oil and gas industry, particularly with congestion in other ports. “Montrose Port Authority’s personal attention to detail and pride in its work is very well respected by its customers and their agents,” agrees John. “The teamwork of agents, customers stevedores, and warehousing on the quaysides are particular strengths of the port today.”

Following on from the success on South Quay, Montrose Port Authority is also pursuing a programme of improvement for North Quay, which is home to a number of older berths. A provisional timetable of 18 months for this modernisation has been outlined, and research is taking place to negotiate appropriate funding packages for the works. Investment programmes such as these form a key part of the Authority’s master plan which will help secure the future of the port for generations to come.