With indigenous North Sea gas supplies in decline and growing demand for new gas sources in the UK, National Grid positioned itself to meet the supply gap by developing and commissioning an existing liquefied natural gas (LNG) storage plant on the Isle of Grain, Kent, into its phase one importation terminal in 2005. 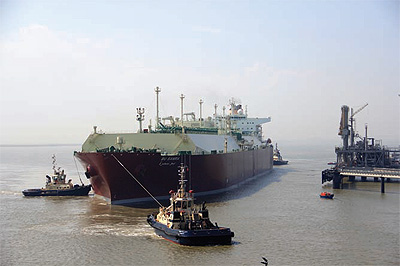 National Grid Grain LNG Limited, a wholly owned subsidiary of National Grid, has not looked back since then, with a triple capacity expansion to 15 million tonnes per annum (equivalent to 20 per cent of UK gas demand), reaching completion for Winter 2010, on time and on budget.

The site has four of the biggest above ground full containment storage tanks in the world, with each able to hold as much LNG as the first phase of the plant; two state-of-the-art jetties that can berth the largest LNG vessels in the world, and fourteen vaporisers. It is the largest terminal in Europe and the eighth largest in the world. The company is keen to meet the significant challenges caused by the decline in supplies from the North Sea and has invested £1billion into the Grain LNG terminal to date, with further options for a fourth phase of expansion in mind. “We currently are investigating the potential for additional importation expansion, with planning permission already in place for a new storage tank and second cryogenic line. We are keen to continue expanding and are in discussions with key players about future developments,” says Ed Carter, commercial operations manager at Grain LNG, National Grid.

With tanks converted to hold LNG, the company sold its phase one capacity of four 50,000m3 tanks, to a joint venture between BP and Sonatrach on a 20 year contract. The company has an exemption from certain regulatory arrangements, such as third party access, allowing for long-term contracts to be put in place with customers. The exemption also means tariffs are not published and that holders of capacity have primary use of the terminal. However, if a customer does not use a berthing slot for whatever reason, it is then offered to those interested in the wider market.

As part of the phase two expansion, in 2008 the construction of three new 190,000m3 tanks was completed and the additional berthing slots were sold, via 20 year contracts with GDF, Centrica and Sonatrach, taking the company up to 164 berthing slots and a site capacity of over 800,000m3. 2010 saw the commissioning of phase 3 expansion, with construction of an additional 190,000m3 tank and a second jetty capable of berthing the largest LNG ships in the world, Qmax, and 20 year contracts with new customers EON and Iberdrola, taking site capacity to approximately 1,000,000m3 and a total of 236 berthing slots. “This was a huge success for the business, and inline with previous phases was delivered on time and on budget, and to date, we have received 289 cargos from across the world.” states Ed.

Grain LNG is a proud member of The Society of International Gas Tanker and Terminal Operators (SIGGTO), which was formed as an international organisation to give all industry participants the opportunity to share experiences, address problems and obtain agreed criteria for acceptable standards and best practices in the trade. The society originally began with 13 members and expanded to 170 members, who represent the majority of the world’s LNG firms, and also over half of the liquefied petroleum gas (LPG) industry. “There is a lot to be gained from being a member of SIGGTO,” says Ed. “We are keen to continue building on our relationship with the organisation and see it as an excellent opportunity to discuss terminal and LNG infrastructure issues and share experiences on safety and ship operations with other relevant industry peers.”

Safety is the number one priority for Grain LNG, and it celebrated two major safety milestones during the construction of the world’s largest above ground LNG storage tanks, with no recorded 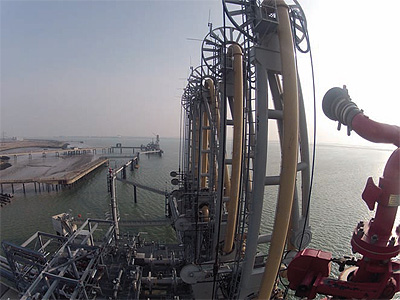 lost-time injuries for each of the one million man hours worked on the project. “We take safety extremely seriously and it is paramount in everything we do, including process safety and operational/human safety and we continually strive and seek to improve all aspects of safety on site,” Ed explains.

“We also are very proud of our green credentials, we are committed to delivering safe and sustainable solutions for our customers and the environment. A major contribution to our environmental goals was achieved with the successful implementation of the Heat Pipe project in August 2012, in collaboration with the nearby EON power station. The project entails taking waste heat from the power station to regassify LNG to its gaseous state.” The project has brought major environmental benefits, reducing Grain LNG’s carbon footprint by up to 350,000 tonnes per annum, and also a huge benefit with the reduction of power consumption at the terminal.

Looking ahead, with the geographical location of the terminal in the Southeast of the UK, it has easy access to road and rail networks throughout the UK and is in close proximity to Europe. This will prove as a key benefit in Grain LNG’s future plans outside of its core business as it pursues other business opportunities, which include; the construction of an LNG road tanker loading facility, LNG ship reloading, bulk reloading and break bulk, as well as the use of LNG as a marine fuel. There is increasing recognition of the environmental advantages of LNG as an alternative fuel, including road, industrial and marine uses. Ed adds: “It is believed that using LNG as a fuel can reduce CO2 emissions by up to 25 per cent and particulate emissions by as much as 90 per cent, which would significantly help the UK and Europe in meeting carbon reduction targets.

“Marine markets have some very strong stringent initial requirements being imposed on them from 2015 and LNG is seen as clean fuel, so there is a huge opportunity as ships convert to LNG and come to our terminal for the fuel of the future.” The company has a tender out for its road tankering facility, which will allow LNG to be loaded onto trucks, giving access to other markets and opportunities. Bids are anticipated for the project in the immediate future, which will allow the business to make an investment decision with new tanker operators and give customers the contingency to sell more LNG.