Commissioned in 1971, National Petroleum Refiners of South Africa (Natref) is South Africa’s only inland refinery, situated approximately 80km south of Johannesburg, in the town of Sasolburg in the Free State.

The crude oil that is destined for Natref is offloaded in Durban via floating Single Buoy Moor (SBM), which is co-shared with other oil companies. The crude is stored in 15 crude storage tanks in 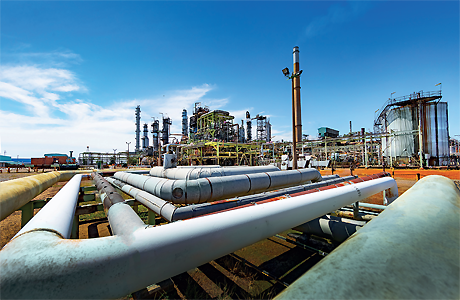 Due to its inland location, near the industrial heartland of South Africa, the refinery is sited in a place where the market for heavy fuel oil is quite limited. Therefore, since it was founded, Natref has needed to be able to get the most out of crude oil, and this requires state-of-the-art equipment. By utilising the bottoms upgrading refining process using medium gravity crude oil, the refinery has the capability of producing 70 per cent more white product than coastal refineries, which have to rely on heavy fuel oil.

Having commenced operations almost half a century ago, it is no surprise that in that time period the refinery has undergone several expansions and upgrades. Mr Dayanand Rajaram, Senior Vice President at Natref, shared some of the more technical details about the refinery’s evolution and current capabilities: “The refinery was originally designed as a 55,000 bbl/d refinery. In 1976, it was expanded to 75,000 bb/d, and then to 86,000 bb/d in 1993 and to 108,000 bb/d in 2002. In 2005, the refinery was upgraded to clean fuels 1 specification. In 2016, the refinery started producing 50ppm diesel.

“The refinery configuration has a Solomon complexity factor of 10.9. As mentioned earlier, it has a significant bottoms upgrading unit (residual crude desulphurization – RCD), as well as the capability for processing vacuum residue and atmospheric residue from the crude columns into FCC feed. In addition, the refinery also has a hydrogen reformer unit, a hydrofluoric acid (HF) unit, and a bitumen unit.”

He continued with some more recent key projects: “A number of upgrades to infrastructure have been completed, with the human machine interface (HMI), and distributed control system (DCS) upgrades undertaken in the past two years. We have implemented health monitoring on key rotating equipment by upgrading the Bentley system, and we have installed state-of-the-art training simulators on two production units, with a further view to link this with virtual reality to improve operator training. Solutions that provide online monitoring of critical operating parameters to prevent process safety incidents have also been installed.

“At the moment, the refinery is piloting and rolling out a wireless plant inspection tool that will assist operators and maintenance staff in improving their effectiveness. These are among some of the more recent changes to improve the data gathering, decision-making and the training of employees.”

Shareholder support
The refinery has also just completed a state-of-the-art hydrofluoric acid cloud mitigation project, to control any significant releases of product. The installations consist of 18 spray monitors, three boundary water curtains, 20 point-source detectors and eight perimeter detectors. This has improved the mitigation actions significantly on the unit, and will increase the safety response in the event of an unforeseen release.

Thanks to the success of these improvement projects and the efforts of its expert team of staff, FY19 (July 2018 to June 2019) was a benchmark year for Natref, comwith the refinery achieving its best volume throughout performance in the past eight years. Reliability, availability and air quality were all highlighted as areas to improve and Dayanand noted that to achieve the FY19 results, the groundwork of defining the targets, work processes and requirements was laid approximately two years ago. “Using the Solomon benchmark data, and tracing the bad actors affecting previous performance, the targets were set and divided into quarterly milestones. Recognition was also given to the fact that our employees are our most valuable assets and the results could only be achieved by taking them along on the journey. 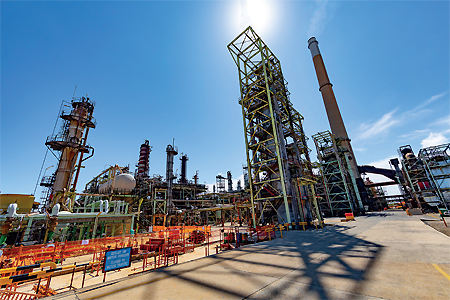 “The alignment of the various levels of the management teams to these goals was an important step in the process. In addition, the alignment of the broader organisation to the goals was completed. The desired performance was contracted with people in various KPI sets and the relevant commeasurements made accordingly.”

Looking specifically at air quality and environmental compliance, Natref, with the support of its shareholders, is in the process of implementing technology to reduce its foot print. A number of the air quality compliance projects are in execution and expected to be on line in the committed time frame. Natref is using technology that is available to the greater refinery industry worldwide, making the implementation easier to get to the final compliance commitments.

The shareholders referenced above (Sasol Oil and Total South Africa) play a very important role in the operations of Natref, as the refinery is a joint venture between the two businesses and it operates as a toll processing facility on their behalf. “No commercial discussions related to products and purchases are done by Natref, as each shareholder manages their markets independently,” emphasised Dayanand. “Crude is received from each shareholder at the Natref gate, processed into products and custody handed back to the shareholders at the point of dispatch. The mandate on safe operations, complying with applicable legislation, rests with the management of Natref, guided by the board and sub-committees of the board. Various mandated meeting structures are in place to ensure that the best safety, operational and technical guidance is vested in the business.”

He also noted that the shareholders have played a key role in assisting with technical challenges as and when they have arisen, helping with a speedy resolution.

Valuable contributors
Sasol Oil and Total South Africa will continue to guide and support Natref going forward, as it undertakes feasibility studies around South Africa’s planned clean fuel standards and regulations, and evaluates and implements energy efficiency improvements to reduce greenhouse gas emissions. “Together with Sasol, we are also engaged with the wider community, supporting various interventions such as dust suppression, reducing wild fires, and recycling,” added Dayanand, shedding some light on the corporate social responsibility side of the business. “We have also implemented changes in our operations to improve our water consumption.”

In broader fiscal terms, Natref is an important contributor to the local economy. “We employ 650 people directly and approximately 600 contractors and up to 3000 people during shutdowns and other projects,” agreed Dayanand. “Further jobs are created in a broader context by the road delivery network, and we also contribute significantly to the local municipality in various forms of taxes.”

Looking out further than the Sasolburg area, Natref has a larger contribution to commake to the success of South Africa as a whole. “South Africa is a net importer of refined products,” explained Dayanand. “We therefore have a significant part to play in the refinement of crude into motor and aviation fuels. The location of the refinery also services an area of the country that does not have other close proximity refiners.

“We make an important contribution to the regional energy mix, but we are aware that the wider oil industry in South Africa, like most of the refineries around the world, operates in a constantly changing landscape. Responding to these changes in a timely manner is crucial for the industry going forward. The evolution of technologies, changing levels of technical skills, a connected world, and faster responses to environmental challenges all require the refining industry to adapt more quickly and become more agile.” In the short term, Natref is executing several capital projects to meet commitments environmentally and improve its business performance, and going forward it looks highly likely to set further benchmarks for excellence in its sector and in South Africa.