Nautilus Rigging evolved general lifting hooks when it introduced Nautilus Hooks to the market in 2009.

The first range was the end product of a four-year development programme, including extensive sea trials with a world-leading offshore drilling contractor, and was introduced to the market at Offshore Europe Sept. 2009. During the last three years work on the product has continued and today the range consists of more than 20 different hook models used by ships, platforms, and offshore installations and general industry across the world.

When European Oil & Gas last featured Nautilus Rigging (issue nine 2011), the company had just begun working on a new subsea hook concept for ROV applications. Just over 12 months later and its first two subsea hooks are in production to be released to the market in January 2013.

Bill Toon, managing director and founder, talks about why it is needed: “Nautilus ROV hooks are a unique product; they are the only positive locking hook available for subsea operations. One of the main issues identified by the industry is that existing ‘spring latch’ style ROV hooks are known to be susceptible to self releasing the load in the unpredictable hydrodynamics of the subsea environment; where, at times, the sling inside the hook of the spring latch models can become slack, allowing one side of the sling/link to flip back over the hook and pull down through the spring latch and thereby self releasing the sling/load. It is a particularly prescient issue when lowering through the splash zone, which is the transition phase between air and water. The unique positive locking function of Nautilus ROV hooks eliminates this risk as the load/sling always remains securely locked in the closed hook until the lock is activated, even if the lifting slings become slack through the transition zone.

Development of the new type of subsea hook began with Nautilus Rigging fabricating a prototype from the deconstruction of one of its existing models and modifying it in a fashion suitable for operation by the ROV manipulators. Tank testing of the fabricated prototype received a high degree of positive feedback from the engineers and partners involved, and confirmed the hook’s functionality and interaction with the ROV. The second-stage involved commissioning of working prototypes (rated to 22 tonnes) for a field trial exercise. The working prototypes, which incorporated further modifications and improvements identified during the tank tests, were distributed to two major subsea operators for field evaluation that concluded, very successfully, in late October 2012. 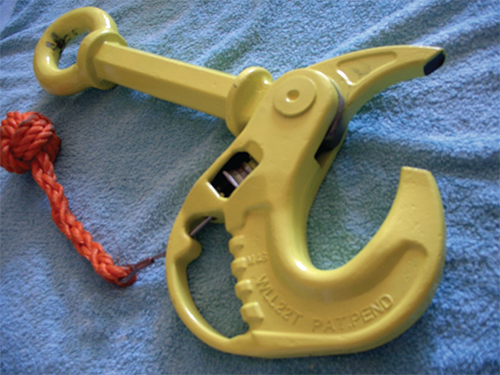 Bill describes in more detail how the new hook works: “The load cannot release itself until the hook’s lock is activated by the ROV, by positively locking the arm and closing the hook it remains closed and completely secure until the lock is activated by the ROV. This ‘locked closed’ feature has the added benefit in that it also prevents any accidental clipping in or hooking up of unwanted umbilical cords and bars. The design incorporates all the standard Nautilus Hooks features, including the patented safety handle and sliding lock mechanism for easy operation. Nautilus Subsea hooks eliminate the risk and hazards associated with loads self releasing and we believe this new product will provide the industry a cost effective solution to safe, and above all secure, subsea lifting.”

An additional feature is an integrated secondary unlocking method that can be utilised to open the hooks should the primary ‘ROV activation wire’ fail. The primary wire is a single 316 SS wire assembly swaged onto a bespoke SS threaded stud that fits into the lock piece. The wire assembly is load rated to 1200 kg, which is a considerable improvement on the current method where a wire loop is attached to the spring latch, which in turn is pulled inwards by the ROV to discharge the load. This inward movement of the spring latch often creates a snagging problem as the slings and/or lifting rings can become fouled behind the spring latch, which makes the discharge an awkward operation. The positive locking function of the Nautilus ROV hook eliminates this possibility as it has a smooth internal load bearing profile that prevents any snagging or fouling because the locking arm opens outwards providing an unobstructed, simple, and quick discharge.

“The lock mechanism of traditional style self-locking hooks is not readily adaptable for ROV operation, as such the current ROV hook manufacturers have used an adaptation of the older ‘spring latch’ style hooks,” Bill continues. “Conversely, we recognised the industry needs to improve the safety and efficiency of the ROV lifting hooks, by adapting our patented lock technology and advanced hook design we have developed the next generation of ‘positive locking’ subsea lifting hooks. Having consulted with industry leaders, and from their input and response to our development programme, we are confident that Nautilus ROV hooks will have a significant impact in the sector. This is a relatively low cost item yet it provides subsea operators potentially huge cost savings in preventing damage to expensive equipment and associated down time costs that result from a ROV hook self releasing.”

The company is officially launching its initial two models at the SubSea UK Exhibition in Aberdeen on the 6/7th February 2013 (Stand B53). Both models have a safe working load of 22 tonnes: the NH – SS22E is the standard eye top model used for release loads (laying mats etc.) and the NH – ROV 22E is the long-shank model for release and ROV hook up.

The hooks are CE certified and are supplied with manufacturers test certificates. During the past year, Nautilus Rigging has continued expanding its distribution network for its safety lifting hook range around the world. New agents have been appointed in some of the world’s highest growth oil and gas regions including Brazil and the Far East.

“Our subsea hooks have created a lot of interest from within the industry, we are currently accepting advance orders for the first production hooks, which will be available for supply in January 2013,” Bill concluded.