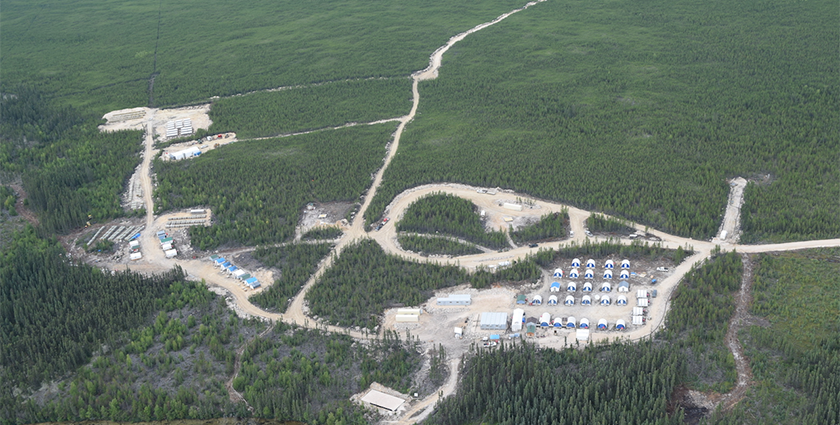 Saskatchewan, Canada is the second-largest uranium-producing region in the world – representing 16 percent of global production, according to the Fraser Institute. In the midst of this uranium-rich province, acquisition, exploration and development company NexGen Energy Ltd. is working Canada’s largest development-stage uranium deposit.

“The Arrow Deposit was discovered by NexGen in February 2014,” Vice President of Exploration and Development Garrett Ainsworth says. “The Arrow Deposit’s maiden inferred mineral resource estimate was released in March 2016 at 201.9 M pounds U308 contained in 3.48 M tonnes grading 2.63 percent U308.”

NexGen Energy has drilled an additional 73,091 meters at Arrow since the maiden resource and will be updating its resource report in the first half of 2017 to reflect its findings. “We had one of the largest drill programs on the globe in 2016,” Ainsworth notes. “We drilled 96,992 meters at our Rock I property, and we have made several other discoveries along trend from Arrow that include Bow, Cannon and Harpoon. It’s the same project but different mineralized zones.”

Starting Exploration
Before joining NexGen Energy in 2014, Ainsworth was the project manager that lead the discovery of the Patterson Lake South deposit in the Athabasca Basin. He received The Association for Mineral Exploration, British Columbia 2013 Colin Spence Award for the discovery and development of the deposit. “My tenure as the project manager of the Patterson Lake South project from inception in 2007 to June 2013 has been an exploration geologist’s dream come true,” Ainsworth said at the time.

The project was a joint venture between Alpha Minerals and Fission Uranium, which owns 100 percent of the deposit. Fission acquired Alpha in fall 2013, which subsequently lead to Ainsworth accepting a position with NexGen Energy. “When NexGen Energy started exploration, we could only dream about finding something like the Arrow deposit,” he says. “It ticks all the boxes from a development perspective in uranium. This is due to Arrow’s unique characteristics of being land-based and the deposit being completely hosted within the competent basement rocks.”

Because almost every resource has a drawback or some limiting aspect – whether tough ground conditions, metallurgy or a lake located above it – NexGen Energy has identified nothing that would be a “show stopper,” Ainsworth explains. “It looks like it’s going to be a straightforward project for us to develop,” he says. 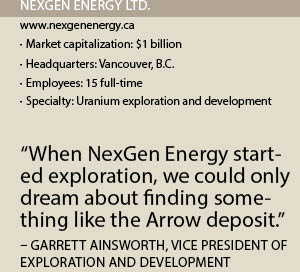 Future Production
NexGen Energy has the capability to take Arrow into production and is performing pre-feasibility, technical and environmental studies. “If a major mining company wanted to buy us out, it would have to be for a value that’s greater than what we can do ourselves,” Ainsworth explains. “We have all the skills and experience across the board, management and technical teams to progress Arrow through development and into production.”

About 20 to 30 percent of NexGen Energy field staff and contractors are First Nations and the company says that the future development of Arrow will bring more jobs to the local communities. NexGen wants the town of La Loche to benefit from its success and it is in communication to help develop the community. La Loche is the closest town to the Arrow deposit, located 96 miles south of the project.

NexGen Energy has a full-time staff of 15 in its Vancouver and Saskatoon offices, but once drilling commences the company expects to increase that number up to 100. “We make sure our people are doing the job they were hired to do,” Ainsworth says. “The rest of the time we want them looking up to their nearest supervisor to see what they can do for them and to put themselves in their supervisor’s shoes to prepare to move up. We are getting good professional growth by using this system.”

Increasing Demand
The price of uranium has been lagging other commodities, Ainsworth says. At 10- to 12-year lows, the price of uranium is down so drastically, but that doesn’t reflect current demand for the nuclear fuel, he adds.

“China, India, the Gulf states and even the UK are building reactors,” Ainsworth says. “Most experts foresee a fairly stable 2 to 4 percent CAGR in demand, but where the big question lies is on the supply side. When you consider 40 percent of the world’s supply comes from Kazakhstan, which carries a large sovereign risk, and combine it with the fact that 15 percent comes from Canada, which is under low sovereign risk, but a very high technical risk due to the challenges of extracting ore at places like Cigar lake; there is a very concentrated supply market which can be disrupted easily and meaningfully. We see a perfect storm brewing for Arrow whereby it is potentially put into production at a time when the supply-demand fundamentals have never looked stronger.”

Hong Kong-based CEF Holdings, backed by business tycoon Li Ka-shing, recently invested $60 million in NexGen Energy. “CEF has a good feel for what’s going on in China in terms of the energy plan moving forward and it’s a really good sign of confidence for the upside potential in uranium and in NexGen,” Ainsworth notes.

Moving forward, NexGen Energy will focus on publishing an updated resource estimate in the first half of 2017 and its pre-feasibility study later next year. “For winter 2017, we are planning another aggressive 35,000 m drill program on Arrow with a focus of growing and defining the deposits, as well as some regional drilling on high-impact targets located along trend from Arrow,” Ainsworth says.