With several years of industry experience, Nordic Maritime PTE Ltd. has garnered a respected reputation as a Singapore based ship owner and management company. The business was founded by Morten Innhaug during 1999 and began operations as a ship manager for 2D and 3D seismic survey vessels on behalf of the Russian geophysical company Dalmorneftegeophysica JSC (DMNG). From this base Nordic Maritime continued to develop and gradually grew from a ship management company to a fully fledged vessel owner and operator in its own right, with its prime areas of operation including Southeast Asia; West Africa; the Middle East; India; Brazil; China; Australasia and Russia. Presently the company is headquartered in Singapore and also manages a further office in Jakarta, Indonesia from where it specialises in the operation of vessels flying the Indonesian flag.

As the company has grown so too has its service offering, which has expanded and developed inline with the changing demands of the offshore oil and gas sector, as executive director for business development and marketing, Kjell Goran Gauksheim explains: “Today we essentially operate two departments in Nordic Maritime, one of which is seismic survey, while the other is subsea and offshore support. Over the years we started to acquire our own vessels, enabling the company to not only provide seismic management but also sail its own ships. We acquired our first 2D seismic vessel in 2007 from there on we have further expanded with 3D and ocean bottom node (OBN) capabilities, which have remained a core part of the business since 2007.

“We have also invested into a totally different market in subsea support vessels and we have now built a DP2 subsea vessel in India with a sister vessel arriving later this year. This means that we had a new vessel for 2014 and we have another coming in this year, as well as a further new build seismic support vessel.” 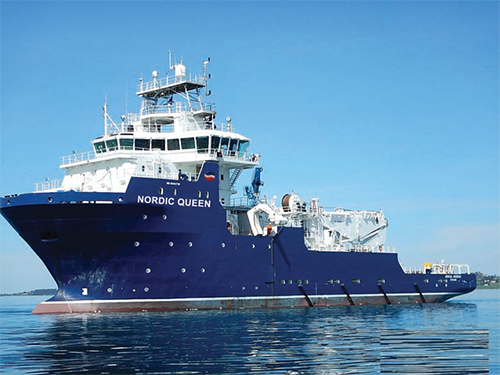 Indeed despite the uncertainties within the market generated by the falling price of oil, Nordic Maritime has remained proactive in ensuring that it maintains a modern fleet and in winning contracts across the globe. The DP2 VS470 MKIII subsea service vessel, Mokul Nordic was built and delivered during March 2014 at the Tebma Shipyard in India. Following this the vessel was sailed to Norway, where it received its 100-tonne active heave compensated offshore knuckle-boom crane before beginning offshore support operations in the North Sea. “We took delivery of the first of two new IMR/ ROV support vessels during March 2014 and at the time we still had to install the crane, which was located in Norway,” Kjell elaborates. “We took the decision of rather than sending the crane to India, to instead sail the vessel to Norway and have a strong summer operating in the North Sea. This was highly successful, as against strong competition from high-quality tonnage we were able to secure work for the entire summer even with a major as Statoil.”

The performance of Nordic Maritime and its new vessel continued to impress culminating with the announcement of the renaming of the Mokul Nordic to the Nordic Prince during December 2014, as well as the award of a five-year charter for the vessel on behalf of Noble Energy in Haifa, Israel. Commenting on the award of the contract at the end of 2014, Kjell exclaimed: “We are glad to announce that our vessel, Nordic Prince had arrived at Haifa Port and on-hire for the highly reputable international oil company, Noble Energy. This marks a good start to what we believe will be a strong collaboration between Nordic Maritime and Noble Energy. Nordic Prince is now installed with a WROV and is all ready for the new project.”

During the course of its charter for Noble Energy, the Nordic Prince will perform ROV operations as well as environmental and field development surveys. The contract was won in the face of stiff competition from several strong candidates and following the award of the contract Nordic Maritime has committed to develop local content through a training programme aboard the Nordic Prince in close co-operation with the company’s local partner and agent K&H Maritime Ltd. “We started on the contract during November 2014 and are working on the project now. I am pleased to say that the work is progressing very well – Noble are a great client,” Kjell says.

Although Nordic Maritime has proven itself to be an effective and reliable partner to clients throughout the world, it remains a company that is very much focused on the Asian market and that is also interested in developing local content. As such, its Indonesian base will increasingly be an important hub for the company over the coming years as it looks to capitalise on the impressive success that it has enjoyed over the past months. “We are a Norwegian owned but Singapore based business and very much an Asian market player,” Kjell concludes. “Within our Indonesian office we have already re-flagged three vessels with the Indonesian flag to comply with local Cabotage and we did this to test the waters of flying a local flag. We have all the necessary shipping and agency licenses for operating in Indonesia, which is the biggest market in Asia at present and we have a good foothold there so we hope to gain more business out of being a local operator. Over the next three to four years growing the business and our fleet will certainly be our main target. Asia and especially Myanmar in particular will be a main target going forward but we are also bidding in West Africa, India, the Middle East and other areas of the region.”