Having first been established when its former parent company looked to expand its activities into the heavy lift business, today OHT AS is the third largest heavy transport vessel operator in the world.

In reaching this position, the company has undergone various conversions and acquisitions in order to become a full-time integrated player in the heavy lift market. Most recently, a restructuring of the OHT Group has seen it gain a new parent company in Albatross Investering AS, now renamed to Offshore Heavy Transportation AS.

Speaking previously to European Oil & Gas, chief commercial officer Dagfinn Thorsen explained the Group was left unaffected by these changes: “The management company OHT AS remains unchanged and business goes on as usual. All chartering, engineering and operations are carried out by OHT AS through management agreements with the ship owning companies. Both the ship technical management and crewing company are kept unchanged. In fact, the technical management company is, and has always been, part of the new owner’s business.”

In order to grow its presence in the market, OHT AS has always focused on offering a full spectrum of services. To this end, the company maintains a fleet of four semi-submersible heavy lift vessels, which it uses to provide dry transportation of offshore drilling rigs and onshore modules to its clients. These are the ‘Eagle’, the ‘Falcon’, the ‘Hawk’, and the ‘Osprey’. The vessels are known for their high speed and safe operations, and are backed by staff with a long experience in the industry. Likewise, OHT AS focuses on the key concerns of its customers in working to arrive and load cargo on time. 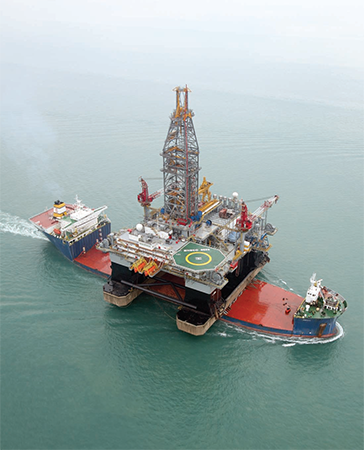 Earlier in the year, the ‘Osprey’ was contracted to deliver a 12,000 tonne hotel and field centre module for the Ekofisk field in Norway. “The end user is ConocoPhillips, but we actually carried out the transportation for Saipem,” notes Dagfinn. “They used their crane vessel to lift the module from our ship to the jacket, so we were working together with them on that.”

The module was built by SMOE in Singapore, and then transported by OHT via the Suez Canal to Stavanger. It contains 552 single cabins, office space, a telecommunications centre, a hospital, and heli-deck hangar space for two helicopters. Whilst this is undoubtedly a major piece of equipment, OHT’s assets have transported even heavier pieces of up to 30,000 tonnes each in the past.

These were in the form of three large JU drilling rigs for Rowan Companies, from Singapore to Norway and Scotland. OHT was able to achieve an average speed of 13 knots for these deliveries, even given the 30,000 tonne weight and with almost 200 feet long legs on each rig. Following on from this, in 2012 OHT was contracted by Maersk to tow three large JU rigs. These transports will take place in 2014 and 2015.

Reflecting on another successful past project in an earlier conversation with European Oil & Gas, this time with Soluciones Energeticas to move a buoyant tower from China to Peru, Dagfinn said: “This project is the first to involve a transverse mating operation (i.e. over the side of the vessel). It was also quite complicated. First the vessel loaded the buoyant tower and the topside module (on a high support) by trailers (roll-on operation). Upon arrival in Peru the vessel ballasted down with a huge aft trim to float-off the buoyant tower, but still keep the topside module above water. The tower was ballasted to an upright position, towed to the vessel’s side and secured to a pre-installed support on the vessel’s deck. Then the topside was skidded out over the shipside and the buoyant tower was deballasted to lift the weight off the vessel and the support. It was a very tricky operation – but all went well.”

Turning his attention to the current status of the market, and OHT’s prospects for the future, Dagfinn concludes with how the company defines itself against the competition: “We’re still working mainly in the spot market at present and we do see that it is perhaps stronger for this last part of the year then before. The offshore drilling market remains good, and we see a lot of new drilling rigs coming out from yards, all that we hope to see as cargo. Whilst there are other heavy lift companies out there, and the principles of what we do may be similar, we believe that OHT sets itself apart with its engineering/operation and vessel capabilities, and this will help us retain our leading position in the market.”