Playing what Tony Woodward, General Manager, describes as ‘a key strategic role’ in thefuel supply chain in the South-East of England, the Oikos site on Canvey Island provides a convenient ingress point that helps to meet the demand for bulk liquid fuel in the region. A critical supplier of jet fuel to London Heathrow, Gatwick and Stansted Airports and diesel to the South-East and Midlands of the UK, Oikos has over 70 acres of bulk liquid storage capability available, from which to service its clients.

Since the company was last featured in EOG six years ago, it has undergone significant changes, one of the most recent of which was its acquisition by Aberdeen Standard Investments (ASI) in 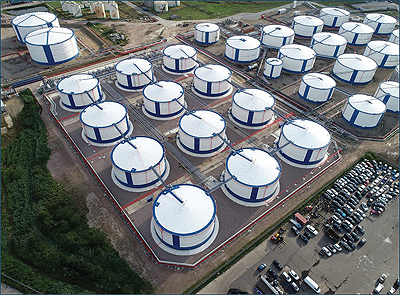 2019. “ASI are long-term players and they acquired Oikos as part of their Energy portfolio. We have already seen an increase in investment in people, training and further commitment to developing the medium- and long-term aspirations for the Oikos Terminal,” noted Tony.

The other activities that deserve to be highlighted at Oikos are the extensive site expansions and infrastructure upgrades that have already been achieved and are still ongoing. Tony gave some more details about what he termed ‘significant and continued investment in infrastructure.’ He started with Project Vela – the refurbishment of two existing tanks in Compound 10 (C10) together with the connection of a further tank in Compound 2 (C2). “As part of this project, the existing bund and tank foundations were removed and replaced with a new concrete bund wall and an impervious bentonite liner was installed. A new culvert was excavated under the North Road to install pipework, services to connect C2 and C10 together. New pumps, instrumentation and safety equipment were installed to feed two new road loading bays from any of the three tanks as described above. New gates were installed together with new drainage, lighting and other necessary infrastructure. The operation is driver controlled using pre-authorised swipe cards, which allow each vehicle and driver access to the terminal to collect the pre-designated load. Each vehicle can be fully loaded in approximately eight minutes.

“Project Vela was successfully commissioned in December 2018 and delivers the first phase of renewed road loading for Oikos. The fuel (Jet) is delivered to a number of airports including Heathrow, Gatwick, Southend and Luton and is a 24/7 operation.”

Substantial project
He also noted Project Serpens – an internal project to promote the safe and efficient transfer of Jet fuel between various parts of the terminal, before moving onto Project Aeris, perhaps the most significant project that Oikos has ever undertaken not just in terms of scale but, also investment.

“To summarise, this project consisted of the refurbishment and extension of the existing Jetty 2 into the River Thames, the refurbishment and renewal of an existing tank storage compound (Compound 4 – 12 tanks in total), and the provision of associated pipework and supporting plant and infrastructure,” explained Tony.

The substantial nature of Project Aeris has to be appreciated in the overall context of Oikos’ position and operations, as Tony pointed out, this is a facility of national significance, occupying a strategic Thames side location within the South East of England – which is one of, if not the, largest petroleum markets in North West Europe. “We benefit from excellent marine access via the deepwater navigable channel of the River Thames and have good links to the strategic road network.

“We also benefit from connections to key national pipeline distribution networks, namely the Compania Logistica de Hidrocarburos – Pipeline System (the CLH-PS) (formerly known as the Government Pipeline Storage System – GPSS) and the United Kingdom Oil Pipeline (UKOP). In this regard, the Terminal is believed to be unique within the South-East of England.

“We took the decision to extend the existing Jetty 2 out into the Thames as far as possible, as there is a continued demand from our customers to increase the potential to accept larger ships and consequently, the size of incoming parcels of fuels. In bringing larger parcels into Oikos, our customers can benefit from a significant freight cost advantage together with further options on the origins of the incoming cargoes. Furthermore, the replacement of the 12 tanks in Compound 4, provides additional bulk storage capacity to permit the safe receipt, storage and despatch of the increased parcel sizes.”

The new Jetty was delivered in December 2018 with the tank farm coming on-line in two phases – six tanks at a time in Spring 2019 with final commissioning in June 2019. Tony noted that the main challenge that Oikos faced was commissioning the tanks safely whilst construction was still ongoing in Compound 4. “This process had to be very tightly managed with significant restrictions on where and how any contractors could operate in that particular area,” he said. On this project Oikos worked hard to achieve the agreement and co-operation of the Port of London Authority (PLA) and undertook the extension without impinging on the main shipping channel, thanks to a comprehensive set of berthing simulation scarried out at the PLA’s shipping and berthing 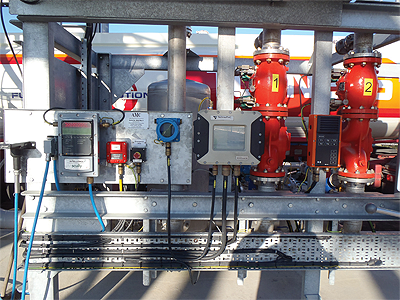 Ambitious plans
Given the extremely technical and complex nature of the above projects, it would be natural to think that Oikos might take sometime to acclimatise to the new facilities, but nothing could be further from the truth – several more significant schemes are already underway. “Project Premo involves the installation of a third road loading bay and the new connection of existing tanks to service an additional demand for supplying roadfuels into the South East of England. This project is expected to come fully on stream inApril 2020,” Tony highlighted, before adding: “We are also working on Project Annexus to recommission the Oikos Feeder Line, which goes underground from the Oikos Terminal to the pump station at Thames B in Thurrock which connects into the CLH Pipeline System (CLH-PS). This existing line was subject to a successful, full third-party inspection, using an intelligent pig, in February 2018. This project is due to be completed and commissioned at the end of January 2020.”

With work on Premo and Annexus still underway, there is also another major scheme on the agenda, the Oikos Marine & South Side development (OMSSD) project. This is not undertaken via conventional planning route – rather it is an NSIP (Nationally Significant Infrastructure Project) which requires considerable work to be undertaken before any planning application is submitted. “We are currently progressing the project through the early stages, so there is a lot of design, assessment and analysis work that needs to be done before we can ultimately fix on what the details of the project will be,” noted Tony.

Significant development
He described the project as ‘quite straightforward’ from both a mechanical and construction perspective, as once the works are constructed, the operation of the OMSSD project will simply replicate the activities that already take place at the site. However, this doesn’t entirely represent the enormous scale of OMSSD, which will be a nationally significant facility and includes substantial amounts of construction, such as new marine loading arms, new import/export pipelines, ten x 30,000m3 storage tanks, two x 5000m3 Fatty Acid Methyl Ester (FAME) storage tanks, consideration of up to an additional seven road loading bays, additional ancillary infrastructure and other support development including an extension to the site office, a new workshop building and additional parking, necessary operational and safety infrastructure and appropriate and necessary habitat mitigation provision.

“The commissioning of the Southside development tankage will allow our existing and future customers access to a safe, modern terminal, which will allow them the full benefit of LR1 and 2 vessel imports, sophisticated blending and additive systems, and re-export by vessel, pipeline and road,” Tony noted. “Continuing to develop the plans for Southside, while also achieving beneficial operation of both Annexus and Premo projects on time and on budget are at the top of the agenda going forward, but as ever, wewill always ensure that the operation of a safe, environmentally responsible terminal, together with meeting the needs of our customers are our priorities at all times.”