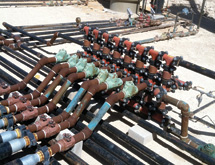 Some companies take oil and gas properties and drain them of their resources, but Opal Resources LLC takes a far different approach. President Rick Lester explains that the Houston-based firm specializes in developing properties and selling them to others so they can exhaust the resources.

“We look for selling opportunities,” he explains. “We don’t look to amass assets and create large reserves. We’re looking to create value in a niche, [and] where we create value is in early project development.”

Based in Houston, Opal has historically sourced and developed projects in Texas before selling them to larger companies. Lester co-founded the company in 2007, with equity commitments from Goldman Sachs. Today, Opal employs a staff of 10 workers. “We’re a small group,” Lester says. “We’re not carrying a whole lot of overhead, so we’re fairly nimble on our feet.”

It is developing a project in the Permian Basin, which it hopes to sell in the next six to 12 months. “That’s our next focus,” he says. “We’re always looking to keep projects in the pipeline.”

He notes that buyers tend to be public oil and gas companies looking to increase reserves and production at a reasonable cost and risk. “The companies like us that are backed by private equity are looking for fairly robust returns,” he says. “Our niche is to create and de-risk sustainable projects that are attractive to larger companies.”

Avoiding Risk
A longtime veteran of the oil and gas industry with more than 38 years of experience, Lester previously was the CFO of Mariner Energy, Contour Energy and Domain Energy/Tenneco Ventures. He credits Opal’s success to the work of its highly experienced technical team, which is critical in the evaluation and risking of potential properties for acquisition and development.

“We’re always looking to define the risk before investing in a project,” he says. “It [requires] a lot of detailed work to try to get those risks identified.”

Opal is not the old prototypical “wildcatter” hoping for one big strike, but rather views the presence of hydrocarbons as a prerequisite before investing.

After that, Opal needs to make sure that hydrocarbons can be produced efficiently and economically. “In the plays today, it isn’t a question of hydrocarbons being present,” he says. “It is a question of getting them out of the ground efficiently and economically, especially with modern drilling and fracking techniques. We haven’t gotten into horizontal drilling yet, but we’ll do that fairly quickly.”

Seeing Stability
Although Opal is a success, it operates in a competitive market, Lester admits. “Whether it’s the larger companies or smaller guys, we’re all looking for the next play,” he says. “We always have competition. Sometimes success is a question of timing and luck, but most often it’s generated through a series of wise choices and by managing your business in an ethical, reputable manner. It doesn’t hurt to have an extensive network of on-the-ground folks to foster deal flow.”

Additionally, “The surplus of natural gas production from resource plays has kept recent natural gas prices at levels that don’t sustain new projects,” Lester says, but asserts that he thinks the market will improve. “We see an upward bias in the futures market. The key to increasing these pricing levels is domestic demand growth coupled with increasing levels of exports.”