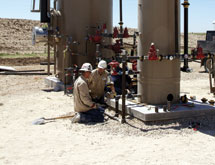 After a recent successful capital raise that brought in more than $12 million, Pacific Energy Development Corp. (PEDEVCO) is currently in the middle of a second round capital raise as the company accelerates the development program for its existing Niobara and Eagle Ford acreage and prepares for its listing application on the New York Stock Exchange.

“We closed our first capital raise at $12 million and had to turn money away,” explains Frank Ingriselli, CEO of Pacific Energy Development and a Texaco alumnus who spearheaded the signing of China’ first successful international oil contract back in the 1980s. “Our investors have recognized the value of our low-risk, high-growth strategy and our strength in pursuing a well-defined niche in the market. We have focused not only on building steady, immediate cash flow from our U.S. assets, but then to leverage that success and our China connections to gain access into China’s new shale play as an early-market entrant.”

The proceeds from PEDEVCO’s capital raising phase will fund its accelerated shale oil and gas development and production operation in the United States as well as potential acquisitions in the pipeline. Pacific Energy Development, which merged with the publicly traded Blast Energy Services in July and thereby went public on the OTC market, currently operates in the Niobrara Shale in Colorado and the Eagle Ford Shale in Texas.

“A lot has been accomplished in a short time,” Ingriselli says. “The SEC has approved our merger with Blast Energy, which means we are now a publicly traded company and that is a big milestone for us. At the same time, we’ve had some very good successes in the development of our assets.”

Niobrara Network
Pacific Energy Development and its Hong Kong-listed strategic partner, MIE Holdings Corp., own 81 percent of 10,000 acres in the DJ Basin in Weld County, Colorado. The successful fracking of its first well on the site in June 2012 has resulted in a reported initial production rate of approximately 450 barrels of oil a day, which was the company’s exact target. Following this success, the company plans to drill up to 20 wells over the next 12 months, beginning with another two wells this month. The company also has recently closed a transaction that increased its Niobrara footprint by 50 percent.

“We believe this asset could support up to 100 to 200 wells and with 100 wells, we see that as worth up to $200 million of value to the company,” Ingriselli commented.

As Pacific Energy Development has increased its interest in Niobrara, it has also invested as a non-operating partner on 1,650 acres in Leighton Field located in McMullen County, Texas, home to the Eagle Ford Shale. With its joint venture partner, MIE Holdings, PEDEVCO has an 8 percent interest, which it is looking to increase. The property’s three wells each produced at an initial production rate of more than 1,000 barrels of oil per day and the operator and 82 percent owner Texon Petroleum Limited plans to drill another well before the end of the year.

Portfolio Expansion
As the company continues to develop these assets, new acquisitions and partnership opportunities nationally and abroad are being reviewed. It has signed a letter of intent to acquire 14,000 acres in Kansas’ Mississippian Shale as the 100 percent owner along with its joint venture partner MIE Holdings.

Its newest opportunity, however could expand the company’s reach far outside of the United States. “One of the strategic directions for our company is the acquisition of shale gas interest in China,” Ingriselli explains. EMI