Down, under and up

Established in 1996, PBU (UK) Ltd began operating as a multi-utility company. Through the first decade of trading it built up its specialism in horizontal directional drilling (HDD) and over the last four years has grown significantly, with a year-end turnover forecast at £20 million.

Operating ten HDD rigs the business works throughout the UK from the northern regions of Scotland, to the western shores of Wales and beyond the eye of London. In the past 12 months activity has also increased in the 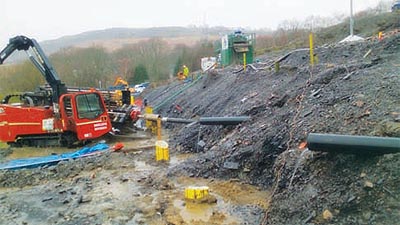 “Growing our HDD expertise was a significant step for the business. The trenchless technology, with directional drills, eliminates the requirement for open-cut work with minidiggers and the associated plant. The impact on the customer is substantially less, and with the work guaranteed, clients have happily converted to this modern method,” says Lee Porter, managing director.

With its strengths highlighted through the success of a major wind farm project in the Falklands it established an international division in the challenging area. “The weather in the Falklands is tough. There is a particularly thin layer of ozone in the region so it is very easy to get burned. In one moment it can be cold, then hot, snowing or gale force winds, but it is the geographical position that poses the biggest challenge to operations. All large equipment and plant is transported by boat, with travel times up to three months. If there is a failure, we have to be ready to respond to overcome the situation,” highlights Lee.

Despite the logistical challenge the business received very positive appraisals in the construction and has subsequently contracted further work on substations, feeder pillars and main switch circuits. Using its multi-utility and project management experience it has also undertaken domestic construction activities, working on tenders for new housing and schools, to which Lee adds: “We are also looking to construct a fuel pipeline, a contract with a scope that it is normally awarded to larger businesses.” 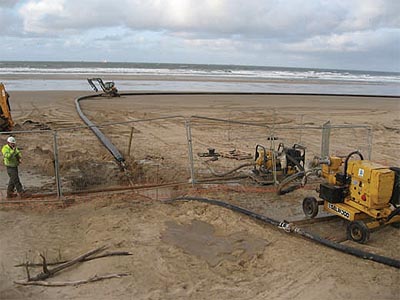 Working with many top players in the industry, the business has built on its successes, even throughout the economic downturn. “We are still growing, and in terms of turnover we have almost doubled in size every year. However we don’t want to grow too large, many of our successes have grown from our ability to operate as a strong but small unit. The success, growth, and increase in turnover are attributed to having the right team. We have hand picked a strong management team and everyone has brought in a unique aspect to the business,” explains Lee.

In a recent project in the UK, PBU drilled a total of eight kilometres beneath Harrogate town centre. The project would have taken 12 months using conventional methods, but instead was completed in just three. “There is less upheaval to the customer because you essentially only dig a pit at the start, and then another every few hundred metres, drilling from pit to pit. This eliminates the need for conventional plant and instead of full set-up, we perform with just four men. There is no congestion, and it is quick and quiet,” Lee highlights, adding that throughout the operation there was not a single complaint made.

Recognised for its capabilities, PBU was contracted to ensure that a repeat of the 1966 Aberfan landslide disaster in Wales would not happen again. With the original cause being a build-up of water in accumulated rock and shale, the £1 million project entailed drilling through the mountainous rock creating ten shots side-by-side. Through this a perforated pipe was installed to drain the water down the mountain. “We are pursuing similar work as this method can overcome a common problem. Work within the drilling industry relies to some degree on word of mouth. Although we do have competition our customers appreciate the management and health and safety approach to projects. It really comes down to putting effort into the projects and building up a relationship of trust to achieve results,” says Lee. Following on from its successes, Scottish Power contracted PBU to perform a drilling operation beneath the River Clyde in Scotland. With other companies previously contracted but unsuccessful, the business utilised its experience and skill to reach a successful outcome.

As a business that is dedicated to progress, PBU operates an apprentice and training scheme aimed at developing future talent, as Lee points out: “Some employees have worked within the company for 15 years, and as we take on more employees, we always look to pair the experienced with the new personnel so that they may pass down the fundamental knowledge. As we continue forward, we are confident of securing new contracts in the Falklands, competing for high-profile projects such as fuel pipelines and airfield contracts that historically were awarded to blue chip companies.” With at least five years work in the Falklands PBU also remains focused on its business in the UK, which continues to grow. “We are going from strength to strength, and with only a few good utility and directional drilling firms on the market we feel that we are well positioned for the future,” he concludes.