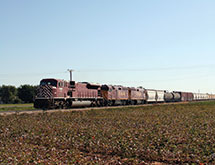 Significant changes have come to the oil fields in the Permian Basin over the last two years. A transition from vertical to horizontal drilling technologies and increased facility investment from oil and gas exploration companies, among other factors, have increased the number of business opportunities available in West Texas.

One of the region’s most critical transportation links continues to invest in ways to take advantage of those opportunities while providing the best possible service to customers.

Permian Basin Railways, a wholly-owned subsidiary of Iowa Pacific Holdings, has in the last three years made a number of upgrades to its two rail lines that serve the region. This includes replacing cross ties, tracks and ballast rock. New sidings have been added to support the increased traffic levels. Many of the company’s customers in the oil and gas exploration and production industries have also made a number of improvements including building new transloading and processing facilities.

Permian Basin Railways was formed in May 2002 following Iowa Pacific’s acquisition of the Texas-New Mexico Railroad (TNMR) and West Texas & Lubbock Railway (WTLC). The company has subsequently grown through acquisition to include the San Luis & Rio Grande Railroad, the Chicago Terminal Railway, Mount Hood Railroad and the Saratoga & North Creek Railway. The company’s corporate headquarters is located in Chicago, with a regional office located in Wolfforth, Texas.

The vast majority of the TNMR’s business is related to the oil and gas industries. The railroad’s outbound cargo includes crude oil and natural gas liquids, and its inbound cargo includes pipe, frac sand and chemicals used in drilling and well completion. The WTLC carries similar oil and gas industry-related cargo, in addition to supporting the region’s agricultural industry, Carswell notes.

‘Unprecedented Growth’
The TNMR operates 104 miles of railroad extending from Monahans, Texas to Lovington, N.M. In 2009, the railroad saw roughly 3,200 total carloads; through the end of 2013, that figure increased to 20,300. Carswell attributes the increase both to an increase in oil prices as well as the growth in advanced technology drilling, as frac sand makes up a large part of the railroad’s inbound shipments.

More than $38 million in customer-funded improvements have been made since 2009, with an additional $5 million to $10 million in investments anticipated before the end of 2014. Permian Basin Railways is also being proactive in making improvements on the line.

“We’re keeping up on track upgrades to keep pace with traffic, and replaced the rails along the railroad’s first eight miles, which has put us in a good position to meet the burst of growth in the area,” Carswell says. “These are brand new rails equal in quality to what a large railroad might have.” Union Pacific and TNMR partnered together to construct a brand new multimillion-dollar interchange yard in Monahans to handle the growth in rail traffic between the two railroads.

The West Texas & Lubbock Railway (WTLC) operates 107 miles of railroad on two lines extending from Lubbock, Texas to Seagraves and Whiteface, both in Texas. In 2009, the line handled 6,600 carloads, divided evenly between agricultural commodities and oil and gas-related loads. The railway’s 2013 total was 12,500 carloads, 10,000 of which were oilfield-related.

Carswell anticipates the line will handle more than 13,000 carloads total in 2014 in part because of the expansion of horizontal drilling as well as customer facility investments.

“Through the end of 2013, we estimate that our customers’ investment in rail-serviced facilities built since 2011 to be roughly $44 million,” Vice President Bruce Carswell says. “It’s unprecedented for a short-line railroad to see that sort of growth in just three years.”

Providing Value
Permian Basin Railway’s focus on service makes it a go-to provider to the industry. “The vagaries of the oilfield business make it necessary for companies to be flexible, and I think we do a really good job acting as a buffer between the drilling activity and the complicated logistics chain that supports the drilling,” Carswell says.

The company’s size also gives it the ability to fast-track projects. “Time to market in the oilfield is incredibly important. As a small company with a relatively small team, we’ve also been able to work with customers to get a facility up and running in a small amount of time,” Carswell says, noting the company can complete projects in as little as 45 days. “That has helped a number of our customers capture opportunities that would have been lost if they had to wait many months to get a facility designed, approved and built.”

“If you’re in Seagraves, Texas, you have access to both the UP and BNSF, and that gives them an advantage to source products at a more economic value than if they were able to access only one of those lines,” Carswell says. “We’ve had customers locate on the WTLC just so they can source products from either of the larger railroads at very economical rates.”