Beginning operation during 2005 following research into the development of a vertically deployed Controlled Source Electro Magnetic (CSEM) survey system, the Norwegian PetroMarker AS is today able to offer oil and gas operators a proven technology. It embodies several advantages over traditional horizontal systems. The company’s vertical CSEM technology was originally engineered between 2005 and 2007, before entering into the market commercially and generating a total accumulated turnover of $80 million between 2007 and 2012. However, while the vertical CSEM system produced some highly favourable survey results, the technical equipment was deemed to be too much of an investment per unit and to be relatively oversized during deployment.

“We realised that it was important to get the equipment technically reengineered to become more efficient and to get our operating cost down and deliver competitive 3D services. We drastically reengineered the equipment and are now ready to re-enter the market. To give you a feel for the proportions of the reengineering the receivers now weigh 270 kg and are about five metres tall, whereas they used to weigh eight tons and stretch more than 12 metres high,” explains PetroMarker CEO, Helge Holen. “We ran two large scale tests in 2016 in the North Sea and demonstrated 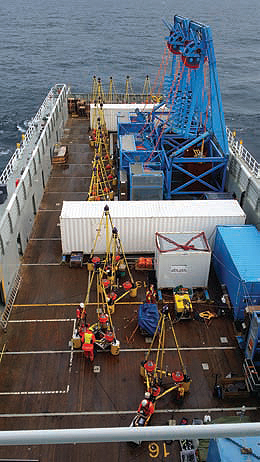 that the improved vertical CSEM technology was fully functional and ready for deployment.”

Together with a consortium of five sponsoring major oil companies and with the valuable sponsorship from the Norwegian Government’s incentive scheme in Innovation Norway, they set out to verify the technology. “By working with this consortium of oil companies we were able to develop a technology verification survey, to be executed in the Barents Sea. It was undertaken during September 2016. In our view, the trial turned out to be a fantastic operational success – the execution went ahead very well, with no safety issues. The deployment of the receivers and the recording of data worked as expected, as did the recovery of the receivers using an automatic release mechanism,” Helge reveals. “The recovered data had a background ‘noise’ level in a clearly competitive range when compared to data obtained by competing technologies. Within this industry it is very important to have accurate data that is not cluttered with unwanted distortion. The noise level that was recorded with our equipment was down to 1.0 volts per square root hertz (V/√Hz).”

Indeed, following the company’s lengthy and dedicated period of reengineering its vertical CSEM system, PetroMarker is now ready to re-enter into the market with a technology that encompasses an impressive suite of advantages. “The key benefit of the vertical CSEM method over horizontal scanning technologies is that we are able to penetrate significantly deeper below the ocean floor. We can scan at depths of up to 4.5km below the seafloor, as opposed to around 2.5km with competing technologies. A quite attractive benefit to the end user. In terms of resolution, the system offers greatly improved lateral resolution, meaning that we achieve a sharper lateral edge where hydrocarbons are present,” Helge says. “The third factor, which also has a lot of potential for the future, rests on the fact that both the source and the receivers are in stationary position when pulsing. This means that we can repeat the deployment in the same positions and repeat the survey. We therefore believe we have the foundation for developing a time-lapse model of a reservoir. This potential application has generated a lot of interest from several oil companies.”

The most immediate market application of the vertical CSEM system offers a valuable tool in oil field exploration and appraisal/delineation. “We can cover large areas with a general survey to support exploration. However, we also see that our deep penetration and sharper lateral resolution appeal to oil companies who want more narrow targeted mapping and ranking of identified seismic anomalies. They believe it offers better derisking and a more attractive cost/ benefit ratio.

“Even more dramatic potential cost/benefit may be reaped in the appraisal phase. A dense targeted grid, covering for example 400 – 800 km2, would provide valuable 3D insights into the extension of the potential reservoir,” Helge explains. The 3D profile helps the oil companies position the delineation wells more optimally and potentially save costly wells. The analysis of the results should be performed before commencing the drilling of delineation wells as they can cost anything from $30 million to $100 million per well to drill. By conducting an effective Electro Magnetic (EM) survey using a dense grid of receivers, it is possible for operators to gain an invaluable insight into the location of exploitable hydrocarbons and to eliminate the need to drill such a high number of delineation wells. The overall cost of surveying a potential field is valued at around $3 million to $7 million, which gives a dramatic payback if you can save one or more wells. “In addition, you might even cut time to first oil,” Helge says.

“Our immediate strategy is to penetrate further into the local North Sea and northwards where oil companies have a very well developed understanding and experience in working with EM. We have also started working with representatives in West Africa, South America and Brazil where operations have remained relatively active,” Helge concludes.

“Our newly reengineered technology certainly represents a new dawn for PetroMarker. We have invested a significant amount of effort in demonstrating the system and its benefits to increase interest from oil and gas operating companies across the world.” The need to cut cost and increase drilling success rates cater for an exciting future for the young company.