A project for the ages

It took nearly ten years of exhaustive research and conceptual and basic engineering before the actual EPC phase of the Talara Refinery Modernization Project could begin in June 2014. One of the three refineries operated by Peru’s stateowned petroleum company – Petroperú – the old Talara Refinery is the largest and most important with its capacity to process 65,000 barrels per day and its considerable capacity for storage of crude oil and fuels. As such, it was selected by Petroperú for an ecological modernisation in response to a proposal for new regulations for the improvement 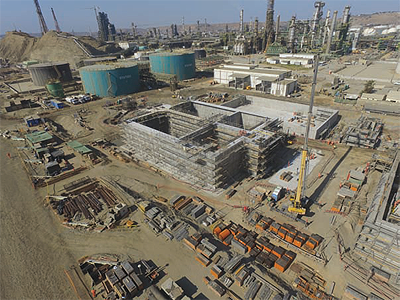 of air quality that materialised at the close of the 20th century.

In 2006, Petroperú began collaborating with the famous American management consultancy, Arthur D Little, to complete the conceptual engineering stage of the megaproject, which eventually got approved two years later. In the ensuing four years, the company also partnered with Spain’s Técnicas Reunidas on the basic engineering package of the scheme.

Given the fact that the Talara refinery is the second largest in Peru, behind La Pampilla in Lima, the project for the increase of its processing capacity to 95,000 barrels per day has rightly been considered in the national interest of the country. The programme is looking to completely modify the current production scheme of the refinery through the incorporation of more complex refining processes and more advanced technology.

“While the current refinery has only three process units, the new one will have 16 that will perform a range of activities related to the improvement of the fuels’ quality. We aim to drastically reduce the amount of sulphur in the fuels, to up to 50 parts per million, thus meeting the Peruvian environment requirements and contributing to the health of our people,” comments Project Manager, Jorge Alméstar. “In addition, the operation of the units will enable us to improve the octanes of the naphtha and reduce the production of residuals. We are working closely with four licensors, two from the US (ExxonMobil and UOP), one from France (Axens) and one from Denmark (Haldor Topsoe), and with our EPC Contractor from Spain (Técnicas Reunidas) whose support and experience are vital for the delivery of the project.”

New infrastructure
As it has said before, one of the licensors in question is none other than ExxonMobil. The American corporation’s Flexicoking technology will be used in one of the most important process units at the new refinery, helping to convert heavy feeds to lighter products such as diesel, gasoline, and LPG. “There are only seven process units of this type worldwide and ours will be the eighth when we open the refinery in March 2021. With Talara being classified as a deep conversion refinery type, it made sense for us to opt for the Flexicoking technology provided by ExxonMobil as it offers great flexibility when converting residuals into high-value liquid products,” Jorge remarks.

Together with the 16 process units, Petroperú is also working on the construction of five complementary auxiliary units for the production of hydrogen and nitrogen, the treatment of acid gas and its conversion into sulphuric acid, the management of different types of water, and the electricity, steam, and condensate treatment. These installations are being executed with the support of another Spanish company – Cobra Group.

Jorge discusses the functions of each of the plants: “The first one will be dedicated to producing hydrogen and nitrogen, with the former being particularly important for the removal of the sulphur. It bears mentioning that the unit will be fully compliant with the hydrogen capacity required for production of fuels according to the Euro 6 regulation, which has not yet come to Peru, but which we expect to start being implemented within five years. This is why we want to be prepared for its introduction.

“The second plant will cover the sulphuric acid conversion, while the third and the fourth will reflect our objective of treating the effluent that is being disposed to seawater around 500 metres from shore,” he continues. “Last but not least, the fifth auxiliary unit will give us the opportunity to produce steam and generate electricity of around 100MW. At this point in time, we are concluding the detailed engineering phase for all of the auxiliary units, prior to the beginning of their construction, which, in turn, is scheduled to be completed before the commissioning of the refinery.”

To finish off the review of the new infrastructure that is being put in, Jorge touches upon the construction of a new pier and further storage capacity. “We are intent on building 21 new tanks with a combined capacity of 1.5 million barrels,” he reveals. “This will add to the already existing 84 tanks that provide a capacity of 4.7 million barrels.” 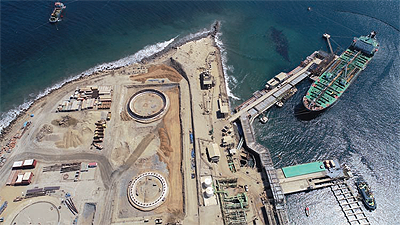 Complex installation
Now entering its most critical stages, the Talara Refinery Modernization Project is being implemented while the old refinery is still in operation, making its execution even more challenging. A large number of preparations and technical assessments were needed to verify that the construction can go ahead, since the current site has been home of the old refinery for 102 years and, therefore, the feasibility of installing new infrastructure on its soil had to be confirmed.

Having followed the tried-and-tested global practices outlined by ExxonMobil throughout engineering, as well as complying with over 200 other local regulations, Petroperú has developed and adopted multiple practices itself regarding the construction of the facilities, tailored to the conditions in which the project needs to be delivered.

“We have utilised off-site construction, precisely because the current refinery is still fully operational. Doubtless, this poses a lot of challenges for us, as we need to adhere to strict procedures when installing the new infrastructure and replacing some of the existing units. Completely understanding the complex nature of the installation process, we have used cranes with a very significant lifting capacity to perform the required tasks. Similarly, we have had to be very accurate in the assembly and transportation of the equipment to the location of the new refinery,” Jorge explains.

“It probably goes without saying that we are keeping safety as our number one priority for the duration of the project and I am extremely proud to report that we have already achieved 60 million man-hours without any critical injuries sustained by any of the employees,” he adds. “This figure is doubly impressive when you consider that more than 7000 people are engaged in the scheme and that we are working on it without shutting down the old refinery.”

Historically significant project that will benefit all of Peru
Reflecting on the long and winding road the Talara Refinery Modernization Project has been on since the idea for the construction of a new, future-proof refinery emerged some two decades ago, Jorge reaches the conclusion that all of the experiences and challenges Petroperú has encountered will now come in handy during the upcoming, most complicated final phase of the project. “We have learned a lot of lessons so far and we are confident that they will help us to safely see the programme through and maintain the quality levels we and our partners have been known for up to this point.

“We believe that we are setting an example across Peru and bringing new experience and knowledge to the country’s refining industry, where the focus falls on the sustainable and environmentally friendly operations that not only lead to the production of cleaner fuels, but also prioritise the health of the people. There is no doubt whatsoever that this is the most significant investment project in the energy sector of Peru and I think that everyone involved feels that they are participating in something historic and we are all happy to be able to introduce best practices and remain at the forefront of the industry’s development in the years to come,” Jorge sums up.