Established in 1937 Pittsburgh Corning has developed a leading reputation in the supply of high-performance glass insulating products for the building, energy and industrial markets and has remained at the forefront of designing products that stand the test of time. The company was formed from Pittsburgh Plate Glass Company and Corning Glass Works and for 75 years it has supplied its innovative glass block technology to clients within a number of industries. Today Pittsburgh Corning is active in every corner of the world through the delivery of its technically advanced FOAMGLAS insulation and glass block products, and continues to grow while further investing to allow the company to better reach its clients.

FOAMGLAS insulation was introduced in the US during the mid-1940s and later, owing to the growing global demand for the product, Pittsburgh Corning expanded its presence into Europe with a large manufacturing plant in Belgium that went into operation in 1965. Today Pittsburgh Corning Asia has become an important part of the company’s global operation as it responds to increased demand for Pittsburgh Corning insulation products. The company is building a brand new factory in China, which is estimated to be completed in the spring of 2015. It has already had the good fortune to work with all of the large energy companies in China during the last decade. As a consequence, Pittsburgh Corning understands the urgency in developing China’s energy infrastructure and is committed to providing the safest, highest quality cellular glass insulation material available. The new plant will give the business the ability to quickly respond to customer needs while assuring that their plants operate safely over the long term.

FOAMGLAS is a unique product with a manufacturing process comprised of four stages; glass production, grinding of the glass to glass powder and mixing it with carbon, foaming and annealing of glass and finishing of the product. The result is an extensive range of different grades of FOAMGLAS insulation, which have varying degrees of compressive strength and 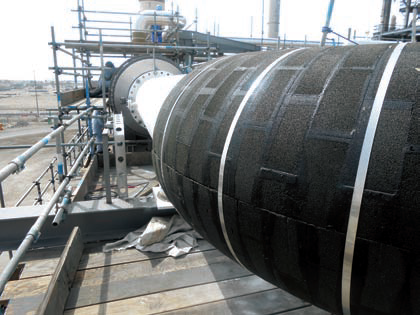 thermal conductivity. These variations make FOAMGLAS the ideal insulative solution for a number of applications. “FOAMGLAS insulation is a closed-cell, lightweight, rigid material composed of millions of completely sealed glass cells,” explains Frank Ergeets, business development director. “Due to its closed-cell nature, it is completely impermeable which means that it is 100 per cent moisture resistant, it has a zero water vapour permeability and isn’t liable to deterioration by vermin. It represents the pre-eminent insulation material for corrosion resistance, as it is resistant to organic solvents, nearly all acids and most corrosive atmospheres. It is a dimensionally stable material with a high compressive strength, which is still easy to cut to shape. Finally, FOAMGLAS insulation is 100 per cent glass and contains no binders or fillers, therefore it cannot burn or support combustion nor will it absorb flammable liquids or vapours.”

Within the oil and gas industry FOAMGLAS insulation is the leading solution in both low temperature environments and high temperature situations. For example during low temperature operation it is possible for water vapour to enter permeable insulations and condense, which causes a build up of water and/or ice that drastically reduces performance. Furthermore, during high temperature service poor insulation can lead to loss of thermal efficiency and increased energy consumption. In each case, FOAMGLAS offers an effective solution that mitigates the effects of extreme temperatures, making it a highly sought after solution throughout the oil and gas sector. “Since the 1960s tank builders worldwide have trusted FOAMGLAS insulation as a core component in tank base insulation systems and today thousands of hot, cold and cryogenic tanks are supported by FOAMGLAS insulation systems,” Frank says. “In fact, FOAMGLAS HLB insulation is a core component of over 90 per cent of the world’s liquified natural gas tanks base insulation systems, a critical application requiring high load bearing capabilities and thermal insulation properties.”

As such Pittsburgh Corning has delivered FOAMGLAS insulation to clients all over the world including Qatar, where it was used for the chilled water system at Hamad International Airport in Doha, Qatar. The project was one of the company’s largest, encompassing over 350 kilometres of pipeline section and over 35,000 prefabricated fittings. As it enters 2015, Pittsburgh Corning will continue to deliver its market leading insulation products and it has a strong order book that will enable the business to continue to grow and solidify its premier position as a supplier of industrial insulation. “The biggest project that will dominate 2015 for us will be Gazprom’s Yamal LNG project in the Yamal peninsula in Russia,” Frank concludes. “The Yamal LNG project is one of the largest industrial undertakings in the Arctic, which will involve the construction of three LNG trains and a vast gas terminal. FOAMGLAS insulation is specified for the insulation works so this will be one of the main projects for the upcoming year.”