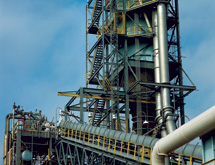 According to the company, the campus is a technologically advanced electric generation facility that is 95 percent owned by eight nonprofit utilities. They are committed to providing clean, reliable and affordable base-load power to hundreds of communities in the Midwest and Mid-Atlantic regions. The company says the campus’ combined design efficiencies mean Prairie State will significantly improve the industry’s environmental profile by replacing existing, less-efficient power plants.

The cooperatives and public power companies that own Prairie State are accountable to the consumers and local governments they serve. These utilities are engaged in renewable energy projects and effective energy efficiency programs.

To ensure this, Prairie State is part of a balanced energy portfolio that can back up its transition to lower-intensity carbon generation. The company says the plant has the potential to accept greenhouse gas capture systems when the technology is commercially available. Prairie State’s state-of-the-art air quality control systems make it among the cleanest power plants of its kind in the country for regulated pollutants.

Prairie State gives its owners the ability to secure more than 30 years’ worth of coal reserves in advance, thus ensuring its customers steady affordable rates for decades to come.

Prairie State Energy Campus represents the visionary thinking and action by eight public power agencies and the world’s largest coal company to provide millions of Americans with affordable, reliable and clean power for years to come, the company says.

Cleaning Coal
Prairie State says it promises to be among the cleanest major coal-fueled plants in the nation by using an innovative application of technologies. The plant uses pulverized coal technology, where coal is ground to the consistency of talcum powder and used as a fuel for a boiler to heat water and produce steam.

The Prairie State Energy Campus actually consists of two supercritical units with an output capacity of 800 megawatts each. The plant design incorporates state-of-the-art emissions control technologies that make it one of the cleanest coal-fueled power plants in the country. The power plant will consume approximately 6.5 million tons of indigenous coal per year from the adjacent mine.

Prairie State’s Lively Grove coalmine extracts from a part of the Herrin 6 seam. The coalmine is the only source of coal for the campus and will mine nearly 7 million tons each year. The company uses continuous mining methods through the room and pillar technique. Prairie State significantly reduces its carbon footprint by transporting coal from Lively Grove mine to an adjacent power plant instead of by rail from the Powder River Basin, the company says.

For instance, the company made a $1 billion investment in the best available control technology to create the cleanest coal-fueled power plant in Illinois and one of the cleanest in the world. Also, Prairie State’s operating permits come from the U.S. EPA, Illinois EPA, Mine Safety and Health Administration, Illinois Department of Natural Resources and other federal, state and municipal agencies.

Technology behind the Campus
According to Prairie State, supercritical power plants like the two at its campus are highly efficient, creating more energy per ton of coal used. Within the boiler, low-nitrogen oxide (NOx) burners impede the formation of NOx by lowering the temperature of the flame to control the way the coal combusts.

The turbines, according to the company, consist of fan-type blades attached to a shaft that are rotated by a stream from the boiler, converting the kinetic energy of the steam into mechanical energy that is distributed over the grid.

An SCR further controls NOx emissions by injecting product into the air stream as it passes over a catalyst, causing the NOx to be converted to nitrogen and water. The SCR also helps with mercury control.

The dry ESP removes virtually all particulates from the air stream in addition to some mercury. The dry ESP uses electrodes to place an electric charge on the particles, which are captured on an oppositely charged plate. These particles are then shaken from the plates and collected.

Sulfur dioxide is dramatically reduced by scrubbers, which inject a limestone and water mixture into the air stream, where it reacts to capture or scrub the sulfur dioxide. Scrubbers also help control the mercury.

The air stream passes through the scrubber into a wet ESP, which will remove fine particulates and other constituents. Wet ESPs use multiple high-voltage fields to attract the particles to an electrode, which is then washed with water to capture the constituents, including some mercury.

Empowering the Economy
Prairie State Energy Campus is set to make a significant economic impact on southern Illinois and the Illinois economy. The University of Illinois estimates that Prairie State’s impact on the region to be more than $785 million annually.

The campus itself is one of the largest power plant construction projects in the United States and the second largest capital project in Illinois in the last 10 years. At its construction peak, the company’s construction firm, Bechtel, employed more than 4,000 tradespeople.

Since its founding, Prairie State Generating Co. has hired more than 250 local vendors and suppliers, spending $80 million in Washington County alone. More than 500 permanent, full-time employees are working at the campus, and economists predict Prairie State Energy Campus will stimulate the creation of more than 800 additional jobs.